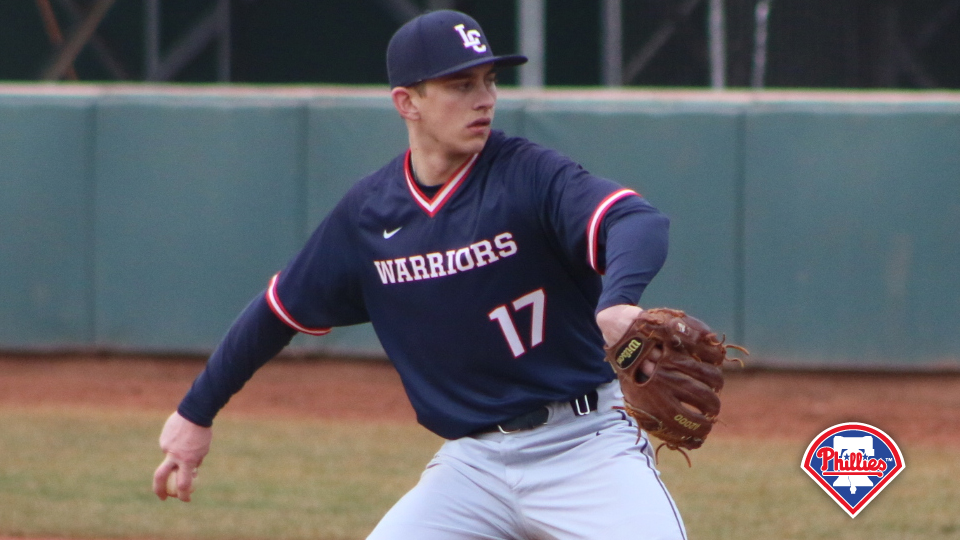 The complex leagues can be a little different. After months of Spring Training followed by extended spring training, Minor Leaguers at the lowest levels start playing games on the back fields of Florida and Arizona in late June that count as part of the Gulf Coast and Arizona League season. The game doesn't change, but the performances start appearing in the standings and on stats-heavy player pages. In organizations that have multiple complex-level affiliates, things can get even stranger when players are facing their own teammates. The Phillies, who employ GCL East and West teams to handle their stateside low-level prospects, try their best to keep things interesting.

It didn't get much more interesting than Wednesday's matchup between the two Philadelphia sides.

"In extended where you're seeing the same faces over and over, we'd try to bribe them by saying whoever wins gets a pizza party or an ice cream social," said West pitching coach Bruce Billings. "The guys loved it. All of a sudden, the games count, and there's still that pressure. They always wanted to win. Today, there was that same intensity. It didn't feel like a side field. The guys were locked in like it was a game at a big stadium with however many people around. The guys showed up."

Four GCL Phillies West pitchers -- Brandon Ramey, Hsin-Chieh Lin, Brian Marconi and Tyler Burch -- combined to no-hit the GCL Phillies East in a 5-0 win. It was the Gulf Coast League's first no-hitter since the GCL Nationals accomplished the feat against the GCL Marlins in both ends of a doubleheader on July 23, 2017.

Making his season debut, Ramey, a 30th-round pick last year out of a California high school, got the ball rolling by retiring the first six Phils he faced before issuing a walk to Mitchell Edwards to open the third. He then set down six more in a row and finished with seven strikeouts and the one walk over four hitless frames.

"[Ramey] was aggressive in the way he was attacking with the fastball and mixing speeds with the curveball and changeup and cutter that he has," Billings said. "He was getting it to both sides, up, down, all that. It was a high execution rate with good sequencing. [Herbert Iser] caught a heck of a game too, and they were working incredibly well together."

"It gets the adrenaline going," Ramey said. "You spend all this time getting ready, but it's fun getting back to doing what I do best."

Ramey handed the ball over to Lin, who fanned six and issued one walk over 3 2/3 innings. Coming in with one on and two out in the eighth, Marconi walked one before getting Wilfredo Flores to bounce into a 3-6 force out to end the frame. Burch fanned a pair in the ninth, including the game's final batter in Luis Matos, to close out the no-hitter.

Any no-hitter is special, but that 27th out took on added significance by concluding Burch's professional debut -- he was signed as a non-drafted free agent out of Lewis-Clark (Idaho) State College on June 12. Marconi's brief appearance was also just his second pro game after signing out of George Mason. But for Ramey and Lin, who combined to make seven GCL appearances last summer, Wednesday's outing was a chance to lean on their experience against their fellow Phils.

"As pitchers, these guys are obviously around these hitters a lot, and we're talking to them about what tendencies stand out," Billings said. "Then, you try to see which hitters adjust and which hitters won't. If they do adjust, we have to be prepared. We always want to be one step ahead."

"We're always watching film, look at bat paths of these players and how we can attack it," Ramey said. "Today early on in the count, we decided it was best to go with the fastball away, and then when it got to two strikes, that's when we could use the curveball or go up and in with the fastball."

When the final out was secured on Matos's swing-and-miss, Ramey, who was able to watch the final three innings, and his teammates surrounded Burch on the mound to celebrate, though they tried to keep things somewhat muted.

"It's amazing to end on a strikeout like that," said the GCL Phillies West starter. "Everyone's pumped and screaming, running out there. We kept it pretty classy though and tried to keep it to shaking hands."

Because the win counts in the standings and their hard work will be credited in the stats, the four Phillies pitchers didn't earn their side pizza or ice cream. But Billings did make sure each, along with catcher Iser, received a game ball and signed it along with their respective pitching lines, making sure they didn't walk away from this latest Phillies-Phillies battle empty-handed.

"I want them to have something physical," said the pitching coach. "To throw a no-hitter, it takes execution, being smart and being able to repeat things. So I want them to take that ball, put it up in their locker as a reminder and think of those three things every time. And if they do it again? They'll get another ball."