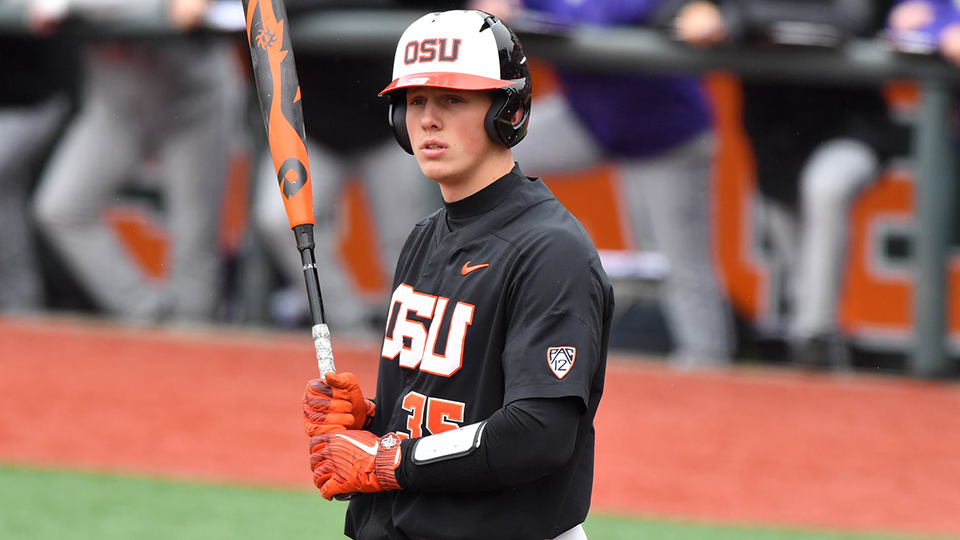 Adley Rutschman ranked sixth in Division I with a .751 slugging percentage as a junior at Oregon State. (David Nishitani/Oregon State Athletics)

Adley Rutschman has signed. His place in the Orioles system has been sealed. Now, he knows where he'll first be delivered.

The top overall pick in the 2019 pick will first report to the Gulf Coast League before moving on to Class A Short Season Aberdeen, Orioles general manager Mike Elias said in an introductory press conference Tuesday.

"He's won a lot of awards this summer for his accomplishments in college, and he's got a few more still, so we'd like him to participate in some of those. That's going to happen later this week," Elias said. "Then, we're going to send him to our Spring Training facility in Sarasota, Florida, join the Gulf Coast League roster, be kind of a slow onboarding process. Get him going after the layoff he's had, and then I expect that he will shortly thereafter join the Aberdeen IronBirds of the New York-Penn League and start his climb through our Minor League ladder."

The Orioles announced Monday that they had signed Rutschman three weeks after they made him the Draft's first overall selection. MLB.com's Jim Callis reported that the 21-year-old catcher signed for a record $8.1 million bonus, beating out the $8 million Gerrit Cole received from the Pirates in 2011, though still below the $8,415,300 assigned to the first overall slot.

The former Oregon State backstop demonstrated incredible all-around abilities over his three years in Corvallis. The switch-hitter produced a .411/.575/.751 line with 17 homers, 76 walks and 38 strikeouts in 57 games for the Beavers this spring. His defensive skills are also considered plus, and he's expected to become the top catching prospect in the game the moment he debuts in the GCL as a result.

Elias added that because of Rutschman's spring workload, the organization might limit his catching assignments early on this summer.

"I think we'll see as the summer goes," said the Baltimore exec. "He's definitely going to catch. He's not going to catch every single day of the week. Nobody does in Minor League Baseball. I think one consideration with him is we feel his defense is fairly polished, so we don't know that he needs to log a ton of development innings at the catcher position. The at-bats are probably going to be more important for his Minor League development."

"It was always a goal of mine to be in this position. I don't know if I ever expected it because for me, it was always about the process of getting there. Now, it's about setting new goals and new expectations. But now that I'm here, I'm just excited for the opportunity to go out and play and make baseball my job."