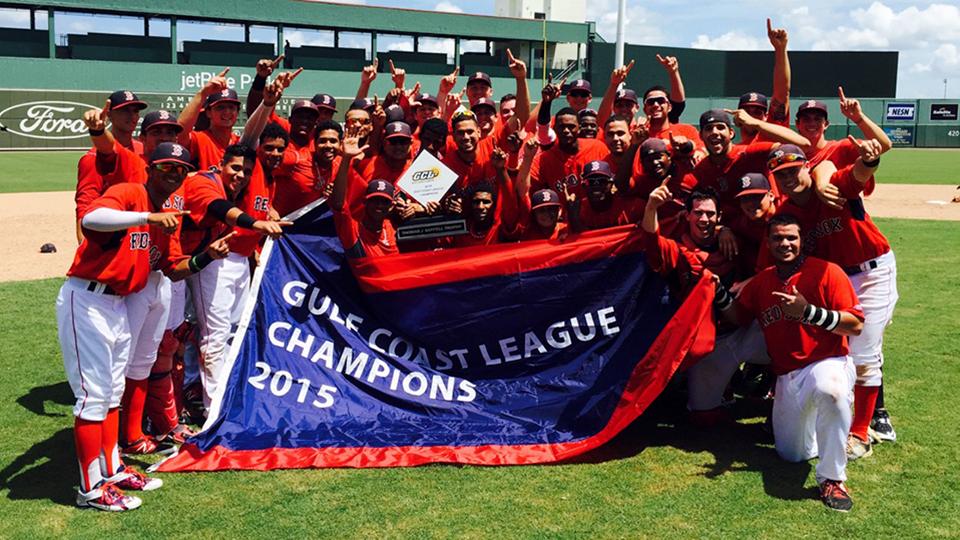 The Gulf Coast League Red Sox were packing up the bus after a rainout Tuesday, something they had done so many times during this Florida summer, when manager Tom Kotchman turned to his club and said some very familiar words. "We've got a doubleheader tomorrow." But something was off. The phrase with met with some funny looks from Kotchman's players. Then, it hit him. The doubleheader scheduled for Wednesday would only become a twin bill if the Red Sox, who had won Game 1 of the GCL Finals on Monday, did not emerge the victors in Wednesday's first scheduled contest. If they did win, they would be champions, having swept the best-of-3 championship series.

"They all looked at me and said, 'Wait a minute, we're getting this done in one,'" Kotchman said. "It was just a slip on my part because we're so used to doubleheaders in the Gulf Coast League. But it was great to see them so confident."

A day later, the Red Sox players followed through on their promise.

Behind a solid pitching performance by Roniel Raudes, the Red Sox beat the Blue Jays, 1-0, Wednesday in a seven-inning Game 2 of the GCL Finals to capture the organization's second straight Gulf Coast League title.

Before Raudes could even take the mound, the Sox, who were playing as the road team in their home JetBlue Park, had already grabbed a lead and what would be the only run of the game in the top of the first. Andy Perez, who signed as an undrafted free agent out of Duke in early July, led off with a single and moved to third on a hit-and-run single by Rafael Oliveras. The Sox designated hitter scored on a groundout by No. 3 hitter Jerry Down to give the Sox a quick, early tally, but Kotchman said it was Oliveras' single to left that keyed his team's small bit of offense.

"He's probably the MVP of the club," the skipper said of Oliveras, who had a .248/.354/.281 line during the regular season and went 4-for-11 in the GCL playoffs. "I said Javier Guerra could be my second son last year. Well, maybe Oliveras can be my third son. He's that valuable. With Perez in motion there, the way he mainpulated the bat to put the ball where it needed to be near the hole in short was huge."

That ended up being enough offense for the 17-year-old Raudes, who was pitching in his first professional playoff game since signing for $250,000 in 2014. The right-hander from Nicaragua allowed more than one baserunner in an inning only once in his five frames, In the one inning -- the fourth -- when the Blue Jays did get multiple baserunners on against Raudes, Oliveras eliminated the threat with a diving play that started a rally-killing double play. Raudes finished with a GCL-high seven strikeouts while allowing five hits and a walk.

Like phenom Anderson Espinoza, Raudes got the bump stateside as a 17-year-old after starting the year in the Domincan Summer League, and he thrived in his time in the GCL, posting a 0.90 ERA and 0.95 WHIP with 16 strikeouts in 20 innings during the regular season.

"We know what we're getting with him," Kotchman said. "He's a fearless strike-thrower who tops out at 92 right now, but he's only gonna get faster. He reminds me of a young K-Rod [Francisco Rodriguez] in that he's skinny with a loose arm and an average-to-plus curveball. We had a high-schooler [Andrew Noviello] catching him today, and he did a great job with him.

"It goes back to our first meeting when we said we're going to be where our pitching is and where our catching is. Well, our pitching was first in the league, and this is the best catching group we've had down here with Noviello, Devon Fisher and Isaias Lucena. You can see where it got us."

Nick Duron and Adam Lau, who were taken in the 31st and 37th rounds respectively in June, kept the Jays scoreless in the sixth and seventh to secure the win.

With the Red Sox capturing their second straight title in their fourth straight trip to the Gulf Coast League Finals, Kotchman was quick to point out the work done by his fellow coaches Junior Zamora, Dave Tomlin, Dick Such, Goose Gregson and Nick Green as well as by the organization as a whole.

"I told these kids the first people they should thank are the scouts that signed them," he said. "We can only play with the hand we're dealt. Whether they were big-money guys or undrafted guys like Perez who came in and hit .355, they all did well for us as a group. It's a testament to the scouts, the farm director, the rovers that we had this group of kids play here."

But with the final out recorded Wednesday, all of the guys behind the scenes were more than willing to let the guys on the field take in the moment.

"When you spend a summer in the GCL, you want anything cold on your head," Kotchman said. "So there was water, champagne, all of that. As coaches, we just kinda sat back and watched the kids celebrate. That's what you work for down here. First is to develop, second is to win."