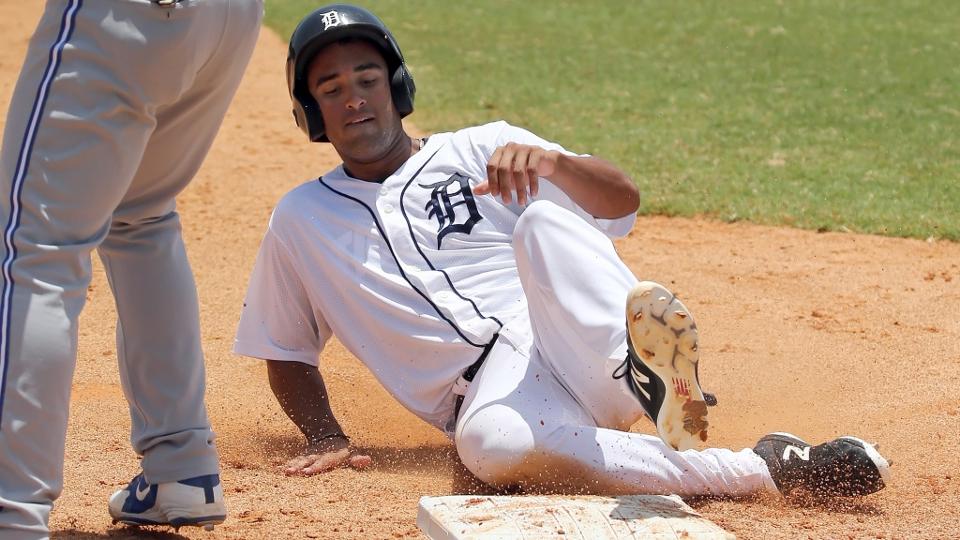 Riley Greene had a .554 on-base percentage and .916 slugging percentage in his senior season of high school. (Cliff Welch/MiLB.com)

Riley Greene made an indelible first impression in his professional debut..

The Tigers prospect -- and fifth overall pick in this year's Draft -- fell a triple of the cycle, collecting two home runs and five RBIs to lead Rookie-level GCL Tigers West to a 9-4 victory over the GCL Blue Jays at Tigertown. Greene finished the afternoon 4-for-5, also collecting a double and single along with the homers.

With 60-grade hit and 55-grade power tools, Greene was ranked sixth overall in MLB.com's pre-Draft rankings this year. Considered one of the best overall hitters in his class, the 18-year-old was named the Gatorade Florida Baseball Player of the Year for 2018-19.

Greene excelled in his senior campaign at Hagerty High School, where he hit .422 with eight homers and 22 total extra-base hits. This year also saw him win a gold medal with the U.S. U-18 National Team the Pan-American Championships.

His spectacular senior season culminated in a top-five pick by the Tigers, who signed Greene two days later.

"The night of the Draft was amazing," Greene told MLB.com earlier in June. "I was with a lot of my family and friends, and being able to spend that night with them was amazing. I think when I got home around 11:30, I was like, 'Dang, I'm a professional baseball player.' It just didn't really hit me while I was there at the party. When I got that feeling, I was very excited to get started."

Finally getting into a uniform Monday, the center fielder parlayed that excitement into some big swings.

Batting second in the order, Greene smacked the first pitch he saw from Julian Merryweather into left field for an opposite-field single. The Orlando, Florida native ambushed the first pitch again in the third, ripping his first professional extra-base hit with a double to right.

Up in the count 2-1 against reliever Juan De Paula in the fifth, Greene smoked the fourth pitch of the at-bat over the right field wall for a his first roundtripper in the Minors.

Although he grounded out in the sixth, Greene did not miss his chance in the eighth. Greene took the first offering from Ronald Govea and deposited it over the wall in right again for a grand slam.

Tigers eighth-round pick Jack Kenley crushed his first home run with a two-run shot in the sixth inning and finished his first pro game 3-for-4 with four runs scored.