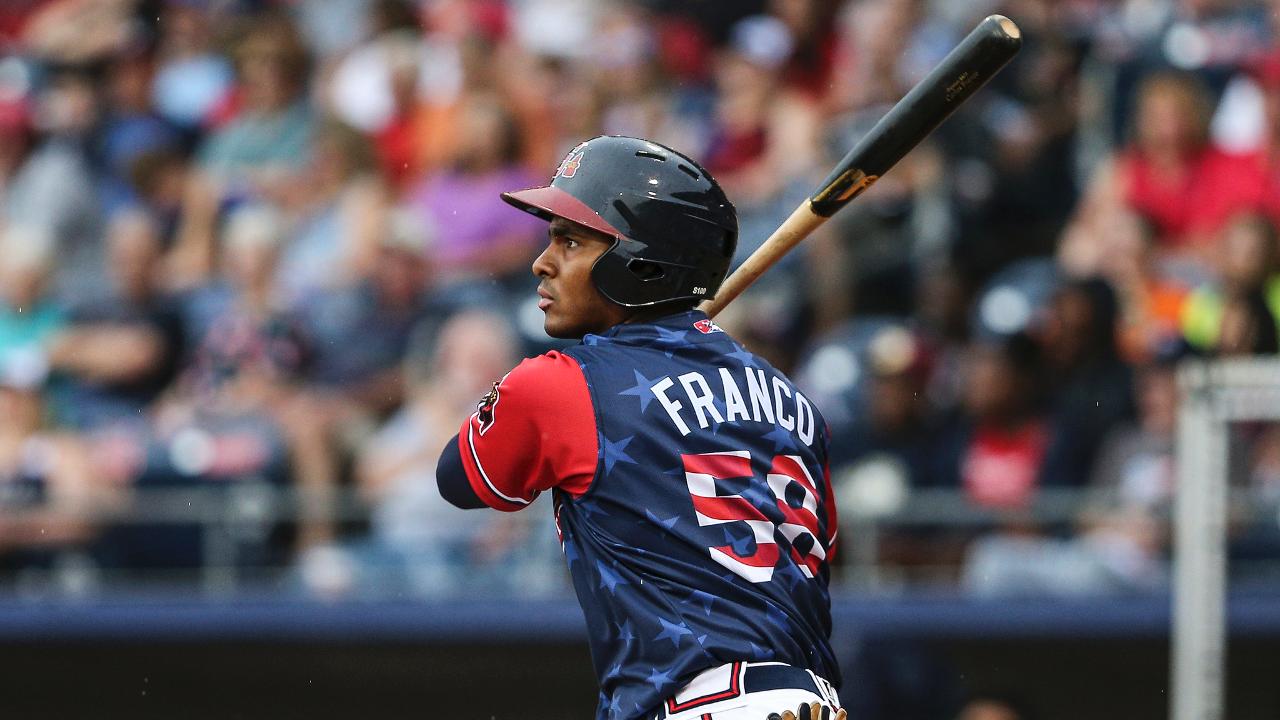 Carlos Franco drove in three runs with a pair of doubles to lead Gwinnett to a win. (Chris Roughgarden)

LAWRENCEVILLE, GA - On a night where fireworks filled the sky, the Gwinnett Braves (42-41) provided fireworks on the diamond by routing the Norfolk Tides (35-50) 11-3 in front of a season-best crowd of 9,992 on Independence Day at Coolray Field.

Carlos Franco went 2-for-4 with two doubles and three RBIs, and Xavier Avery went 2-for-3 with a two-run home run and three runs scored to pace the G-Braves' 12-hit attack. On the mound, left-hander Andrew Albers (W, 7-3) gave up two runs, one earned, on eight hits over 6.0 innings, walked one and tied a season high with nine strikeouts for his team-leading seventh win.

After a 25-minute delay to the start of the game, the Tides scored a run off Albers to take a 1-0 lead in the first inning. Gwinnett quickly responded, scoring four runs in the bottom of the first. With two outs, Rio Ruiz doubled and Matt Tuiasosopo walked to put two runners on base. Franco drove them both in by lacing a double to left to put the G-Braves in front, 2-1. Later in the inning, David Freitas singled to left with the bases loaded to score Franco and Dustin Peterson , giving Gwinnett an early 4-1 lead against Norfolk starter Jordan Kipper (L, 3-5).

Norfolk scored again in the second, but the G-Braves got the run back and more in the bottom of the second. Ozzie Albies led off the frame with a single and stole second for his 21st steal of the year, which ranks second in the International League. Three batters later, Tuiasosopo drove him home with an infield single. Franco followed with a liner into the right-center field gap for his second double in as many innings to score Tuiasosopo and extend the lead to 6-2.

In the third, the G-Braves kept the hitting going against Norfolk reliever Scott McGough. With one out and Kyle Kubitza at first, Avery launched a towering home run, his team-leading eighth of the season, an estimated 388 feet onto the right field berm. The blast raised the lead to 8-2.

Albers settled down after allowing the two early runs, retiring the final eight batters he faced between the fourth and sixth innings to end his night.

Gwinnett added to the lead in the bottom of the sixth as Jace Peterson , in his first game back with the club after being optioned by Atlanta earlier in the day, doubled off the wall in left-center to score Avery and Albies for a 10-2 lead.

In the eighth, the G-Braves added their final run of the night against Norfolk reliever Matt Wotherspoon as Albies lined a single to center to score Avery, who walked earlier in the inning. Sharlon Schoop got the Tides a run back with a solo home run in the ninth, but it did little but change the final score.

Norfolk was led by three hits from Francisco Pena and two hits each from Johnny Giavotella and Logan Schafer.