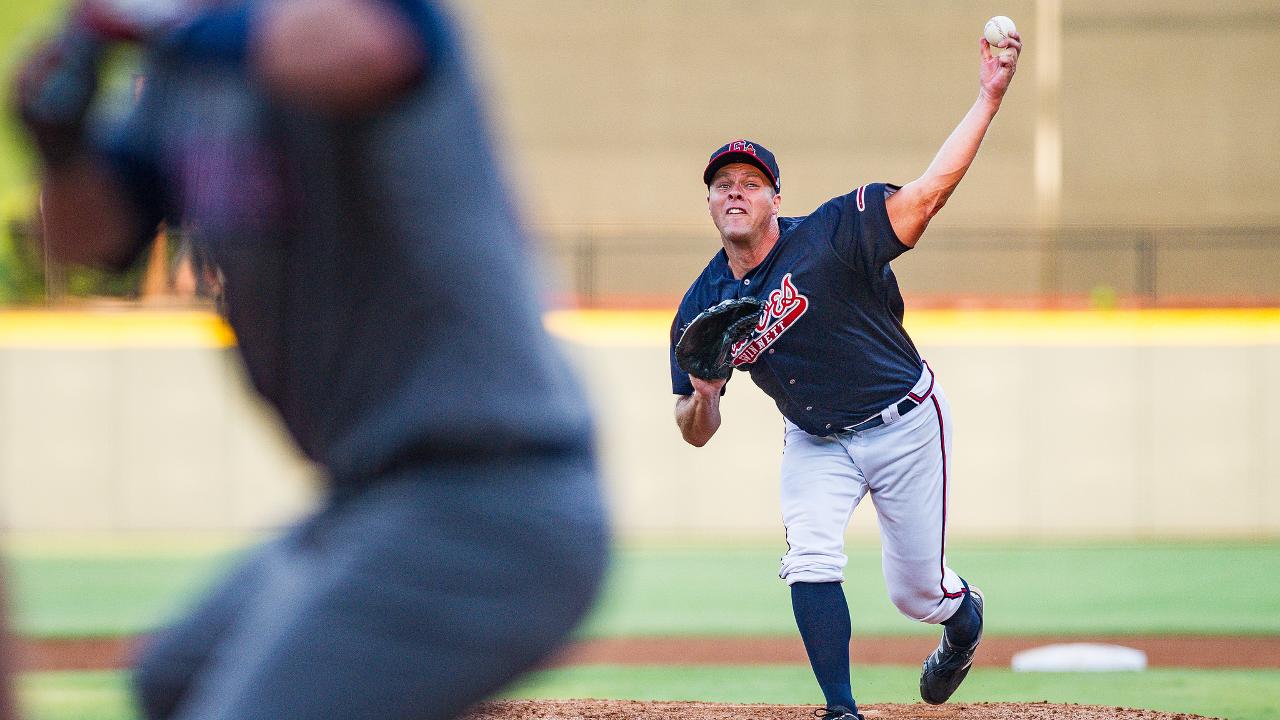 LAWRENCEVILLE, GA - For the fourth straight game, the Gwinnett Braves (47-48) suffered a last at-bat loss as the Lehigh Valley IronPigs (60-37) scored four runs in the ninth inning to win 5-1 in the finale of the three-game series on Wednesday night at Coolray Field.

Gwinnett entered the ninth tied at 1-1 with Lehigh Valley. With runners on first and second and one out, IronPigs' pinch-hitter Andrew Pullin's ground ball snuck under first baseman Carlos Franco's glove for an error, allowing two runs to score as the ball rolled to the right field wall. Later in the inning, the visitors added two more runs on RBI singles from Scott Kingery and Dylan Cozens to take a 5-1 lead, which proved to be the final.

Earlier in the game, the IronPigs got on the board first as Hector Gomez's sacrifice fly scored Rhys Hoskins in the top of the fourth off Gwinnett starter Andrew Albers .

The lead wouldn't last long. After Lehigh Valley starter Zach Eflin retired the first two batters in the bottom of the inning, the G-Braves got singles from Micah Johnson , Franco and David Freitas to even the score.

Albers gave up little else for the rest of his outing. In the sixth, the IronPigs put runners on first and second with one out, but the lefty induced a fly out from Gomez and struck out Logan Moore. The next inning, Herlis Rodriguez led off with a single but Albers induced two fly outs to end the inning, and his start. In 7.0 innings, Albers gave up one earned run on five hits while walking three and striking out five. Over four starts since July 4, he has recorded four quality starts while going 3-0 with a 1.00 ERA (3 ER in 27.0 IP).

The G-Braves threatened against Eflin in the bottom of the seventh as a walk and hit batter put runners on first and second with no outs. But pinch-hitter Xavier Avery grounded into a double play and Gwinnett was held off the board.

In the eighth, Jason Hursh struck out the side in order to keep the game tied, but again the IronPigs would prevail in the ninth.

Hursh (L, 2-3) started the ninth, but was pulled after Franco's error. Enrique Burgos entered and gave up the two RBI singles before getting out of the inning.

In the bottom of the ninth, Pat Venditte pitched a clean frame to finish the win as the IronPigs swept the three-game series.

Johnson led the way offensively for Gwinnett by scoring the lone run and going 3-for-4 at the plate. Freitas went 1-for-3 with an RBI and Franco was 2-for-3 with a walk.

For Lehigh Valley, Rodriguez and Cozens each went 2-for-4 while Kingery was 1-for-4 with an RBI, run scored, and stolen base. With a scoreless eighth inning, reliever Michael Mariot (W, 6-2) earned the win.

The homestand continues on Thursday night at Coolray Field as the G-Braves host game one of a four-game series vs. the Indianapolis Indians, Triple-A affiliate of the Pittsburgh Pirates. Right-hander Aaron Blair (6-5, 4.92 ERA) is scheduled to start for Gwinnett against Indianapolis right-hander Tyler Glasnow (4-0, 1.49 ERA). First pitch at Coolray Field is scheduled for 7:05 p.m. Tony Schiavone has the play-by-play call on 97.7 FM The Other Side of the River beginning at 6:35 p.m.