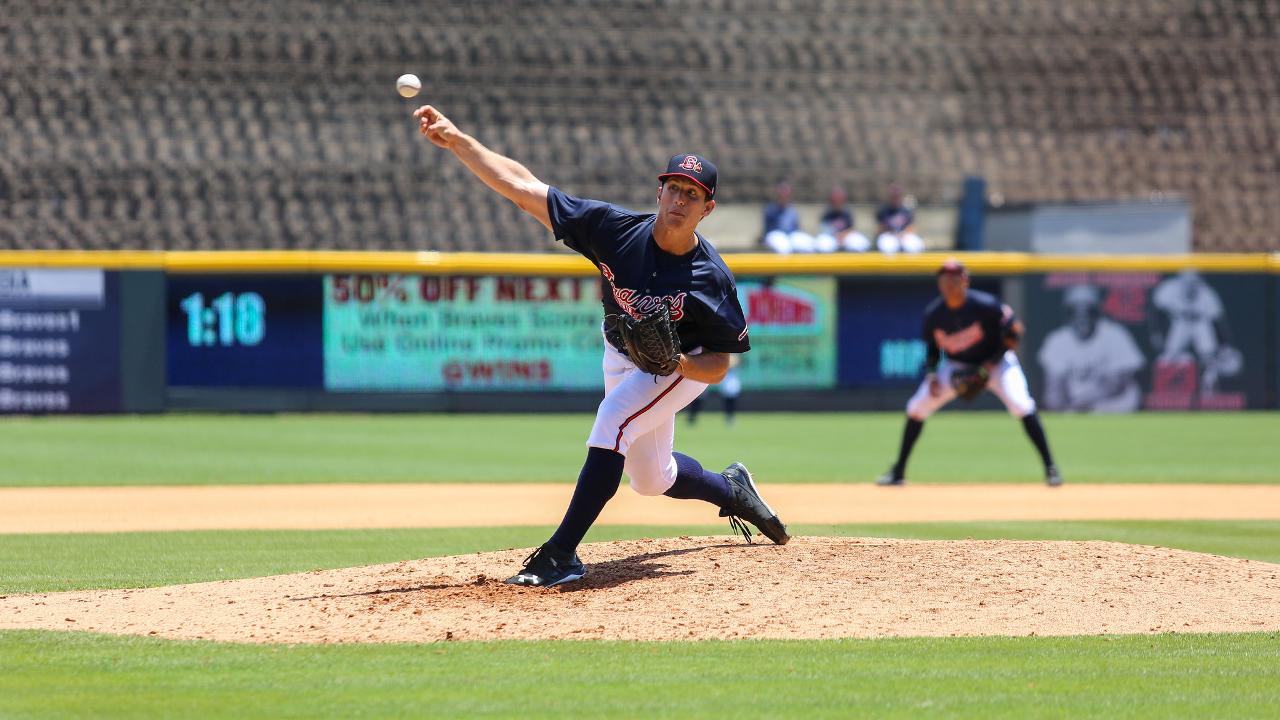 LAWRENCEVILLE, GA - The Gwinnett Braves' (23-22) bats were quieted by the Buffalo Bisons (24-20) on Thursday afternoon as they dropped the finale of the three-game series 4-1 at Coolray Field.

Matt Tuiasosopo's second inning solo home run proved to be Gwinnett's only extra-base hit of the game as the G-Braves couldn't finish off a three-game sweep of the Bisons.

Gwinnett starter Lucas Sims (L, 4-2) got off to a rough start as the first three hitters he faced recorded singles. But Sims rebounded to pick Roemon Fields off second base and then retired Mike Ohlman and Rowdy Tellez to end a scoreless opening frame.

The G-Braves got a pair of singles off Buffalo starter Mat Latos (W, 1-1) in the bottom of the first, but they could not score as the teams combined for five hits in a scoreless opening inning. Latos wouldn't be as fortunate in the second as with one out, Tuiasosopo launched his third home run of the season, a solo shot 390 feet to right-center to put Gwinnett up 1-0.

The lead wouldn't last long as Sims walked the bases loaded with one out in the third. Tellez tied the game with a sacrifice fly to right. The next hitter, Jarrod Saltalamacchia, put the Bisons ahead 4-1 with a three-run home run to right-center, his first of the year.

After giving up the home run to Saltalamacchia, Sims retired the final seven hitters he faced to end his start. He suffered his second loss of the season after allowing four earned runs on five hits while walking three and striking out four over 5.0 innings.

For Buffalo, Latos was also strong after giving up the home run. After the second inning, he retired 10 of the final 12 hitters he faced. Lane Adams singled off Latos with one out in the sixth, ending his start as Matt Dermody came in for the Bisons. The southpaw induced a double play ground out from Carlos Franco to end the inning. Latos earned the win after giving up one run on five hits while striking out seven in 5.1 innings.

Akeel Morris came on for Gwinnett in the sixth and kept the Bisons off the board for 3.0 innings, allowing just two hits while striking out four to keep the game within reach.

In the bottom of the seventh, the G-Braves threatened to get closer against Dermody as Braeden Schlehuber and Xavier Avery hit back-to-back singles with two outs. Buffalo then turned to Murphy Smith, who hit Ozzie Albies with a pitch to load the bases. Johan Camargo then hit a deep fly ball to center and was robbed of an extra-base hit as Ian Parmley made the catch while colliding with the wall to end the inning.

After strong relief from Morris, David Peterson came on for Gwinnett and held the Bisons in check in the ninth.

Leonel Campos pitched a clean bottom of the ninth for the Bisons to finish off the win and earn his third save of the season.

Seven G-Braves recorded a hit in the loss. Saltalamacchia led the way for Buffalo with three hits and three RBI.

The seven-game homestand continues for the G-Braves on Friday night as they open up a four game series with the Syracuse Chiefs, Triple-A affiliate of the Washington Nationals. First pitch is scheduled for 7:05 p.m. Right-hander Aaron Blair (2-3, 5.79) is set to start for Gwinnett, while Syracuse will counter with right-hander A.J. Cole (1-1, 6.59). Tony Schiavone has the play-by-play call on 97.7 FM The Other Side of the River beginning at 6:35 p.m. For tickets, call 678-277-0340 or visit GwinnettBraves.com/tickets