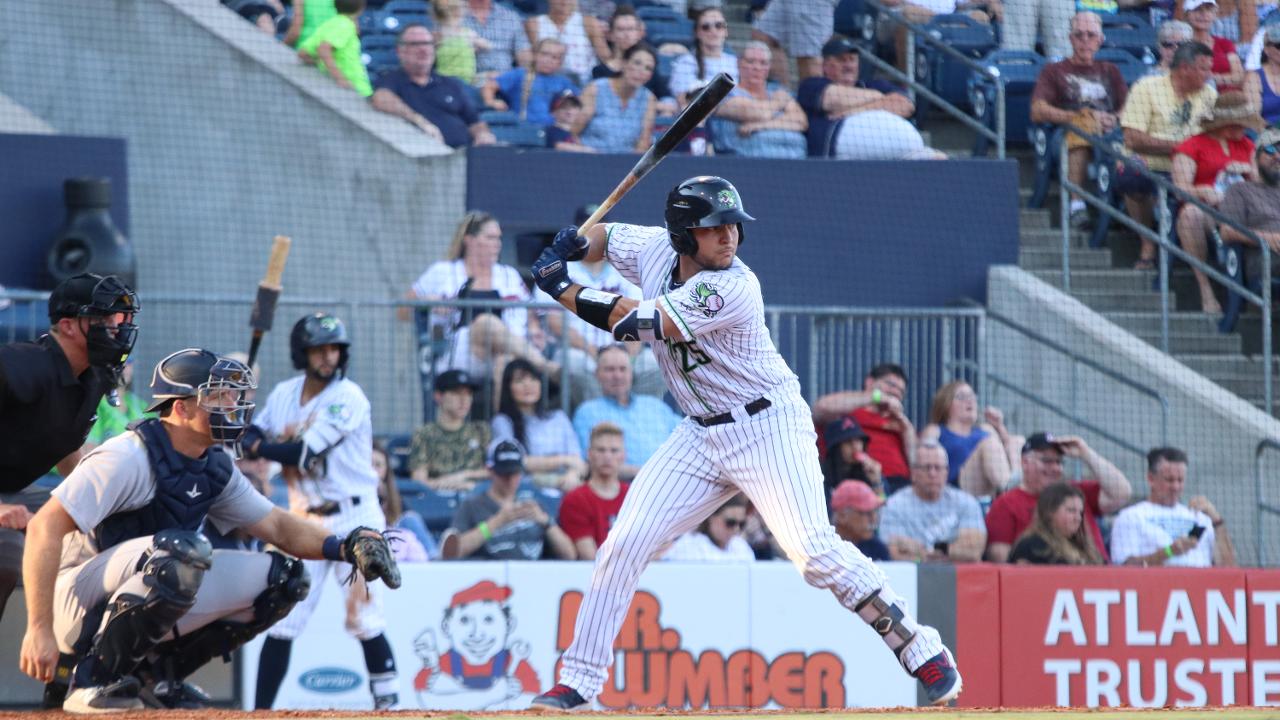 Jackson drove in the lone run for the Stripers. (Matthew Caldwell/Gwinnett Stripers)

DURHAM, NC - The Gwinnett Stripers (79-59) lost 3-1 to the Durham Bulls (75-63) on Sunday evening in game three of a four-game series at Durham Bulls Athletic Park. Aaron Slegers and Jose De Leon combined to allow one run on five hits while striking out 10 for the Bulls, who will enter the last day of the season still in contention for the International League Wild Card spot.

Scoring Recap: Durham took a 1-0 lead in the second inning on an RBI double by Emilio Bonifacio. The Stripers tied it at 1-1 in the top of the fourth on an RBI single by Alex Jackson, but the Bulls moved back ahead 2-1 in the bottom of the fourth on a solo home run to right by Dylan Cozens (7) off Touki Toussaint. Durham extended the lead to 3-1 on an RBI single by Guillermo Heredia off Phil Pfeifer in the fifth.

Stripers Stats: Toussaint (L, 1-6) allowed three runs on three hits, walked four, and struck out seven over 4.2 innings. Pfeifer allowed an inherited runner to score for Toussaint in the fifth but followed with 2.1 scoreless innings and five strikeouts. Ben Rowen worked 1.0 scoreless inning. Jackson went 1-for-3 with an RBI.

Bulls Stats: Slegers (W, 6-7) held Gwinnett to one run on five hits, walked two, and struck out eight over 7.0 innings. De Leon (S, 1) struck out two over 2.0 scoreless innings. Cozens went 1-for-3 with a homer and one RBI in his first game with the Bulls. Heredia went 2-for-3 with one RBI, and Bonifacio went 1-for-4 with a double and one RBI.

Postgame Notes: The Stripers had the leadoff batter aboard four different times but went 1-for-8 with runners in scoring position. Gwinnett is now 12-14 against Durham this year and will lose the season series against the Bulls.