Down to their last out, first baseman's three-run HR wins game 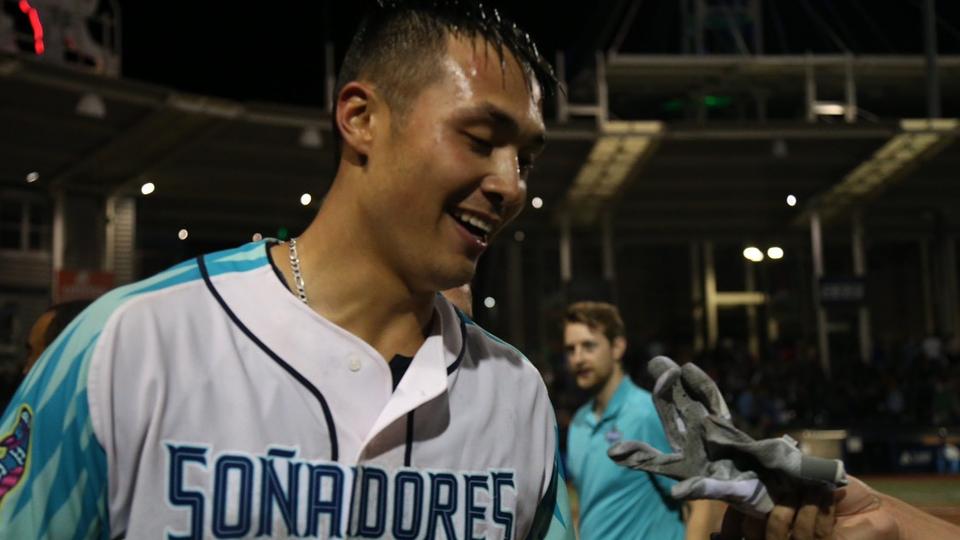 Ron Tonkin Field has been home to many, many magic moments since opening in 2013. And Saturday night tops them all.

The Hillsboro Hops were down to their last out in the bottom of the ninth inning of game one of the Northwest League Championship Series, trailing the Tri-City Dust Devils 3-2. Hops first baseman Andy Yerzy stepped in and, first-ball swinging, smoked a three-run home run inside the right-field foul pole to put the Hops up one game to none in the best-of-five series.

It was an utterly incredible moment --- a walkoff blast clubbed by Hillsboro's all-time leader in games played. And it capped an entertaining game in front of 2,220.

Yerzy's blast spoiled an excellent outing by Tri-City starter Ignacio Feliz, who tossed six shutout innings, allowing just one hit, with no walks and seven strikeouts. He was given a 1-0 lead in the top of the sixth when Tri-City center fielder Matthew Acosta doubled, went to third on a bunt single by Reinaldo Ilarraza, and scored on a sacrifice fly by catcher Logan Driscoll.

Dust Devils DH Nick Gatewood drove a solo home run to right field in the seventh to make it 2-0. Hillsboro got one back in the bottom of the eighth on a Yerzy double and a two-out single by second baseman Ricky Martinez (who extended his hitting streak to a team-high 10 games).

Tri-City led 2-1 going to the top of the ninth, and added an insurance run on a single by Kelvin Melean and a double by Jack Stronach.

That set the stage for the bottom of the ninth. Tri-City left-hander Dan Dallas --- who had gotten the last out of the bottom of the eighth --- recorded the first out of the ninth, inducing Tristin English to ground out the third base. However, he hit Hops DH Dom Canzone with an 0-1 curveball, then issued back-to-back walks to Liover Peguero (on seven pitches) and Corbin Carroll (on six pitches) to load the bases.

Dust Devils manager Mike McCoy then summoned right-hander Tom Colletti from the bullpen for his third appearance in four days. Colletti retired Jesus Marriaga on a sacrifice fly to center for the second out of the inning. But he couldn't retire Yerzy.

Yerzy's blast made a winner of Hops 18-year-old reliever Brennan Malone, who had worked the top of the ninth.

Malone was selected with the 33rd pick in the 2019 draft, one slot before Hops starter Drey Jameson. Jameson, a 22-year-old out of Ball State University, had his best start as a professional, tossing three shutout innings, with two hits, one walk and four strikeouts.

Deyni Olivero, the Northwest League Pitcher of the Year (he was 8-3, 2.09 during the regular season) entered the scoreless game in the top of the fourth. and worked 4.2 innings, allowing three hits (including the Gatewood home run) and two runs --- both earned --- with no walks and four K's.

Justin Garcia got the last out in the top of the eighth for the Hops, striking out the only man to face him.

Game two of the series --- the final game of the year at Ron Tonkin Field in 2019 --- will be at 5:05 PM on Sunday. Games 3-5 will be at Gesa Stadium in Pasco, Wash., Monday through Wednesday, the final two games if necessary.

Sunday's radio pregame show begins at 4:35 PM on Rip City Radio 620 AM, and on the internet at www.RipCityRadio.com.