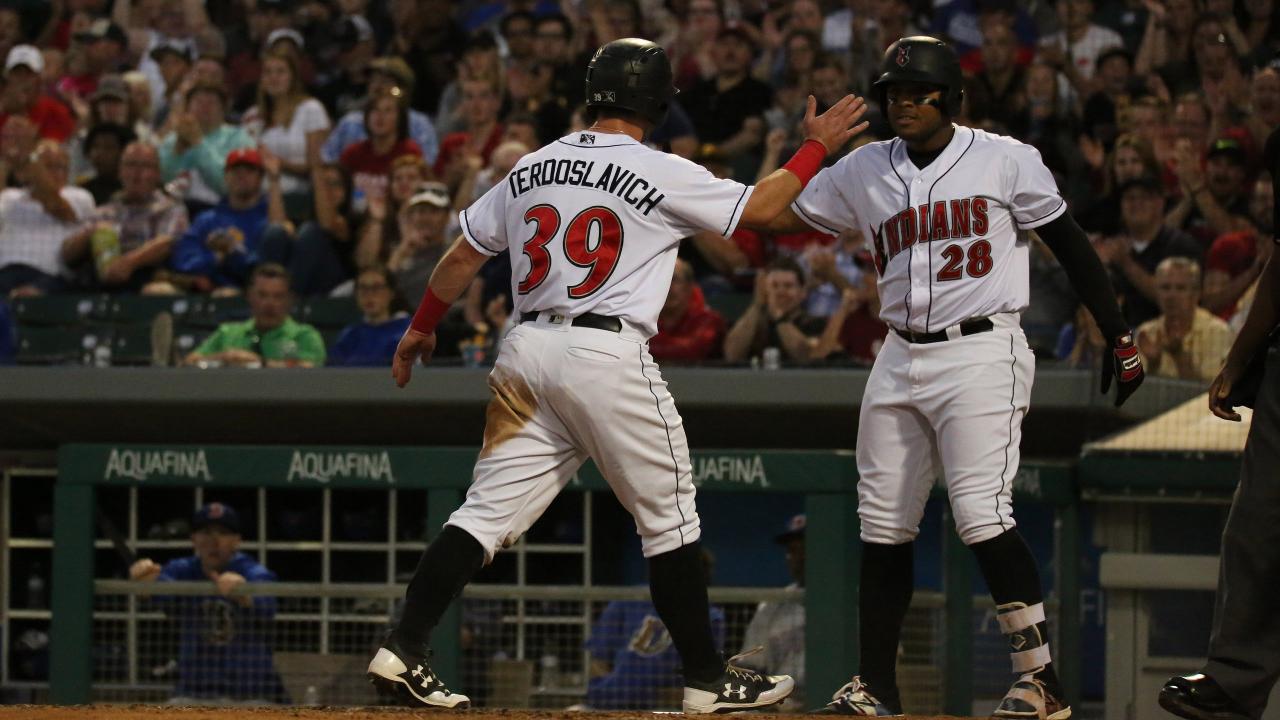 Joey Terdoslavich celebrates with Edwin Espinal after scoring on a Jacob Stallings sacrifice fly in the third inning of Indy's 5-0 win over Durham. (Photo by Adam Pintar)

INDIANAPOLIS - Nick Kingham hurled seven scoreless innings and Joey Terdoslavich ripped a two-run double during a three-run third to help the Indianapolis Indians stave off elimination in a 5-0 shutout of the Durham Bulls on Friday night at Victory Field. The playoff shutout was the first-ever for the Tribe at the Vic.

Indianapolis (1-2) extended the series another day behind the right arm of Kingham. Facing Durham (2-1) for a third time in 2017, the Houston native kept the Bulls off balance, mixing in a variety of curveballs and changeups with his low-to-mid 90s fastball.

He worked around a two-out single in the first and escaped a minor threat in the second when he picked off Taylor Featherston at second base to end the inning. He then worked a 1-2-3 third before Indy grabbed its first lead of the series in the home half.

Kevin Newman sparked the rally against Burch Smith with a leadoff single. Erich Weiss followed suit with a single to right before Terdoslavich cleared the bases with his two-bagger carrying to the wall in deep right-center. Terdoslavich later scored on a Jacob Stallings sacrifice fly, pushing the Tribe's lead to 3-0.

Kingham (1-0) sailed along with the run support, posting zeroes over the next four frames. His outing was punctuated in the seventh when Weiss caught a soft line drive at second and swiftly doubled off the runner at first. Kingham scattered four hits and three walks with four strikeouts in the triumph.

Edgar Santana allowed a pair of singles in the eighth but retired Durham's 3-4 batters to keep the Bulls in check.

The Tribe added two insurance runs in the eighth to cap the scoring. Edwin Espinal drove in a run on a fielder's choice to short, a potential double-play ball that Willy Adames booted. Anderson Feliz promptly pushed the lead to five with a line-drive single to left.

Brett McKinney tossed a scoreless ninth, finishing off Indy's second playoff shutout in the Victory Field era. The other was an 8-0 blanking at Charlotte on Sept. 7, 2012.

Smith (0-1) suffered the loss for Durham after yielding three runs on four hits and three walks in 3 2/3 innings of work.