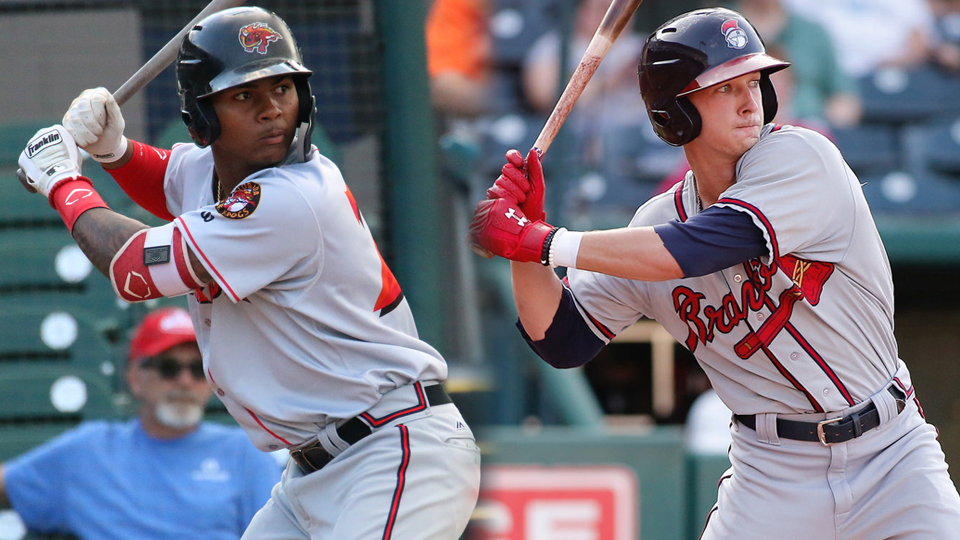 Cristian Pache and Drew Waters each moved one step closer to roaming the grass in Atlanta. (Joshua Tjiong, Chris Robertson/MiLB.com)

It was already a solid week in terms of Braves prospect promotions with Kolby Allard jumping to the Majors and Kyle Wright moving to Triple-A Gwinnett. Then, they made Wednesday moving day in their Minor League system.

Atlanta promoted top-100 prospects Cristian Pache and Drew Waters to Double-A Mississippi and Class A Advanced Florida, respectively, on Wednesday as a big day for transactions in the Braves organization. No. 13 prospect Bryse Wilson also got the bump to Gwinnett while No. 29 Josh Graham moved with Pache to Mississippi and No. 12 William Contreras also got the boost to Florida.

Ranked as the No. 58 overall prospect in the game by MLB.com, Pache heads to the Southern League after putting up one of the best offensive months of his career. The 19-year-old center fielder, who had not homered in his first two Minor League seasons in 2016 and 2017, hit .318/.355/.511 with three long balls in 23 games with the Fire Frogs in July. He finished up his time with Florida with a .285/.311/.431 line, eight homers, five triples, 20 doubles and seven steals during his 93-game stay in the Florida State League. The Dominican Republic native is a plus-plus runner, who is considered arguably the best defensive center fielder in the Minors. His bat has become even more of a weapon as he's matured, though that'll be tested with his move to Double-A.

Waters, the No. 100 overall prospect, will replace Pache in the center field spot for Florida as he joins his second affiliate in his first full season. The 19-year-old switch-hitter produced a .303/.353/.513 line with nine home runs and 20 steals in 84 games with Class A Rome before Wednesday's move. His 32 doubles and 47 extra-base hits were both tops in the South Atlantic League while his 144 wRC+ placed third and his .513 slugging percentage fourth. Although he may not be up to Pache's defensive standard, the 2017 second-rounder still has plus tools in center field and has a good chance to stick there long term.

Higher up the chain, Wilson received his second promotion of the season after starting out the campaign in Florida. He heads to the Minors' highest level after posting a 0.84 ERA with 42 strikeouts and seven walks over his last five Mississippi starts (32 1/3 innings). Wilson, who struggled initially out of the gate in the Southern League, finished his time there with a 3.97 ERA, 89 strikeouts and 26 walks in 77 innings. The 20-year-old right-hander can hit the mid-90s with his fastball and has shown an improved slider that helped ease his transition at Double-A.

Graham heads back to Mississippi after making 20 relief appearances there in April and May. He posted a 10.13 ERA with 16 strikeouts and 18 walks in his first 21 1/3 innings at Double-A, but returned to form with Florida, with which he had a 3.86 ERA with 33 strikeouts and 10 walks in 23 1/3 innings before Wednesday's promotion. The 24-year-old right-hander can hit the upper-90s with his fastball and will need that velocity if he's going to be a late-inning option at the upper levels.

Contreras, who is the brother of Cubs All-Star backstop Willson Contreras, heads to the Florida State League after hitting .293/.360/.463 with 11 homers in 82 games in Rome. Like his sibling, he's got the chance to show an above-average arm from behind the plate, but the Venezuela native has thrown out only 29.7 percent of attempted basestealers this season. Offensively, he's already shown good pop, and he was one of the one best hitters in the South Atlantic League, where he owned a 134 wRC+ that ranked seventh in the Class A circuit.