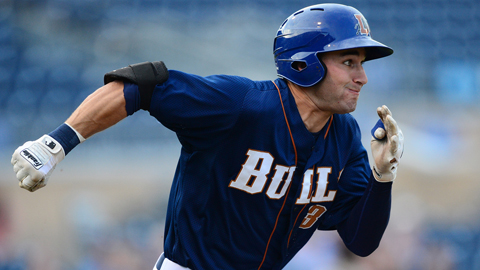 PAWTUCKET, R.I. -- With the night teetering on six hours without a run, the Durham Bulls may have pulled out a 2-0, 14-inning victory over Pawtucket in Game 3 of the Governors' Cup Finals on Friday behind the power of tomatoes.

"I'm glad we won, so I feel better about it," Durham manager Charlie Montoyo said. "That has to be one of the best games we've ever seen in the playoffs. The game was on the line almost every inning."

Running low on energy as extra innings wore on, Bulls center fielder Kevin Kiermaier dipped into the clubhouse and snacked on the only thing he could find in the refrigerator -- a Tupperware container full of tomato slices.

"I had no energy," Kiermaier said. "I ate before the game and then I didn't have anything until like the 10th inning. I was getting lightheaded in the outfield."

Leading off the 14th, Kiermaier laced a shot out to right field that bounced off the glove of Pawtucket's Bryce Brentz, allowing the speedy Kiermaier to get all the way to third.

"I felt really good after that," Kiermaier said. "I thought he was going to catch it. I kind of slowed up around first, but thankfully, he had to run far enough where it got me on third base with less than two outs."

Two batters later, Tim Beckham bounced an apparent double-play ball to second base. Instead, Brock Holt fired home and no one was there to receive the throw as Kiermaier scored the game's first run.

Durham added insurance when Jason Bourgeois beat out a double play at first base, allowing Cole Figueroa to score.

The first two games of the series were dominated by pitching and Friday night's affair followed the same blueprint. The staffs combined for 33 strikeouts, while allowing only 11 hits.

Matt Barnes, the Red Sox's No. 5 prospect, brought the heat as the New England air cooled around him. Pawtucket's starter consistently worked his fastball in the mid-90s, topping out at 96 mph, as he struck out seven over 5 1/3 innings.

Durham counterpart Matt Buschmann yielded only two hits but issued a season-high five walks and was pulled after 4 2/3 frames.

Both teams used eight pitchers, with each reliever seemingly faced with a near-impossible task of getting out of intense situations.

The Bulls loaded the bases twice but left 16 men on base and went 1-for-15 with runners in scoring position.

The PawSox totaled four hits, stranded 17 runners and were 0-for-13 with men in scoring position. Only twice were they able to get a runner to third base with fewer than two outs.

Despite its dormant offense, Pawtucket managed to load the bases in the 14th as Durham closer Kirby Yates hit a batter and issued a couple of walks. But with two outs, he blew his final pitch past Brentz, ending the marathon affair after five hours and 42 minutes.

"It came down to one final pitch," Yates said. "I think it was a little bit more mechanical than anything. I didn't repeat very well, but I was able to make some pitches when I needed to and battle and got out of it, and we won. That's all that matters."

What this series has lacked in offense, it has more than made up for in intensity as all three games have come down to the wire and the winning team has scored only two runs each time.

With a chance to win the Governors' Cup, the Bulls send Merrill Kelly to the mound in Game 4 on Saturday. The PawSox counter with knuckleballer Charlie Haeger.