Durham gets weekend off after three-game sweep of Indians 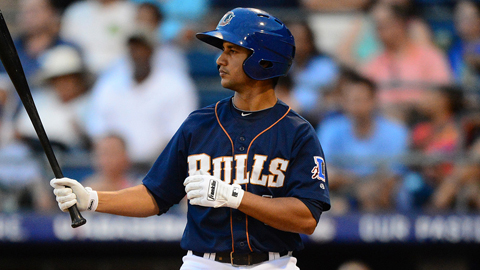 Even though the Durham Bulls would have had two more chances to advance if they lost, they viewed Friday night as a must-win game.

"Anytime you're up, 2-0, you don't want to wait around," Bulls manager Charlie Montoyo said. "If Indy won tonight, they would have made it interesting."

So much for interesting.

Merrill Kelly scattered seven hits over 5 2/3 scoreless innings as the Bulls held on for a 2-1 victory that completed a three-game sweep and secured a spot in the International League Championship Series.

"It was three great games, I'm telling you. It's awesome," Montoyo said. "This is an outstanding group of guys. I want nothing but a championship for them. And we beat a good group of guys in Indy -- it was a nail-biter every game. It was fun because we won, but every game could have gone either way."

Durham did all of its scoring in a scrappy third inning as Cole Figueroa singled home Kevin Kiermaier for his third RBI of the series.

"He's a steady Eddie, man. He knows how to play the game," Montoyo said of the 26-year-old infielder. "He hits in the clutch -- he hit second for us most of the year and he had [62] RBIs. He has great hands and can play third, second or shortstop. He's one of our MVPs, for sure."

Montoyo, who's managed the Bulls since 2007, also credited Kelly (1-0), who worked with runners on base in every inning but struck out six.

"The pitching was great, that's for sure," the skipper said. "Kelly [gave] us the chance when there was no room for error and then we left it to [Adam] Liberatore and [Juan] Sandoval in relief."

Liberatore allowed one hit over 1 1/3 innings and Sandoval carried the shutout into the ninth. A throwing error by Figueroa put the Indians on the board, and they had the tying run at third with two outs when Robert Andino bounced to Figueroa at third.

"Sandoval, after the error, now the game is on the line, he's got to make a big pitch and he makes it," Montoyo said, "And Figueroa makes a great play.

The Bulls missed the playoffs last year, ending a run of five postseason appearances. They last won the Governors' Cup in 2009.

The best-of-5 Championship Series begins Tuesday, and Montoyo plans to hold workouts on Sunday and Monday after giving his players Saturday off to rest and recover.

Knuckleballer Steven Wright worked 6 1/3 scoreless innings as the Red Sox shut down the Red Wings to take a 2-1 lead in the other semifinal series.

"He did a really good job commanding his knuckleball," Pawtucket manager Gary DiSarcina said of Wright. "He threw a lot of good fastballs for strikes, which I think surprised them a little bit. Outstanding job by him, he picked us up big-time."

Backed by the PawSox's 11-hit performance, Wright threw 117 pitches and struck out five. Mark Hamilton went 2-for-2 with a two-run homer in the fifth inning that stretched the lead to 4-0.

"[Hamilton] had great at-bats," DiSarcina said. "I know he'd been pressing a little bit in the first two games. I think he just really focused and stayed within himself and got a couple of pitches he could handle."