Kelly-Kiermaier combination proves too much for PawSox 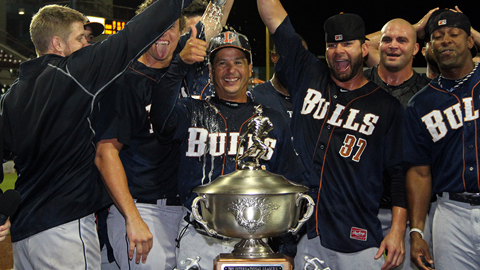 PAWTUCKET, R.I. -- After totaling five runs in the first three games of the Governors' Cup Finals, the Durham Bulls finally broke out the lumber to support another stellar pitching performance as they captured their fourth International League title with a 7-0 win over the Pawtucket Red Sox.

"Pitching was giving us a chance every day," Durham manager Charlie Montoyo said. "It's real special. It's really not that easy to get to this point. We've been here before and it's not that easy to win. It's a good feeling."

Merrill Kelly set the tone for the Bulls right off the bat, retiring the first 10 batters before giving up a fourth-inning single to Jonathan Diaz.

Diaz got Pawtucket's only other hit against Kelly (2-0) and three relievers as they combined for 11 strikeouts without walking a batter.

"I was able to walk into a good game right off the bat," Kelly said. "These guys have put their heart into it all year, I just wanted to wanted to go out there and give it back to them."

It was the second series-clinching win for Kelly, who picked up the victory in Game 3 of Durham's first-round sweep of Indianapolis. This time, he was afforded a comfortable lead from the outset.

After PawSox starter Charlie Haeger worked his knuckler to retire the first two batters, he walked Tim Beckham and gave up singles to Vince Belnome single and Jason Bourgeois that gave the Bulls a 1-0 lead.

Durham struck again with two outs in the second when Kevin Kiermaier sent Haeger's first pitch over the wall in right-center for his second Triple-A homer, a two-run shot that made it 3-0. At that point, it was the largest lead by either team in the series.

"There's not a whole lot I could do with a knuckleball that was dancing away from my barrel," Kiermaier said. "I was just kind of swinging first pitch, no matter what happened.

"It's been such a fun ride. I'm thankful I got the opportunity to come up here and play and help out the team."

The Bulls tacked on another run in the third as Shelley Duncan followed Brandon Guyer's triple with a double to the left-field corner.

Durham opened the floodgates in the sixth as Fontenot ripped its second triple of the night to the wall in center, scoring Duncan. Two batters later, Kiermaier struck again with a two-out RBI single. After racing from first to third on a wild pitch, Kiermaier trotted home on Cole Figueroa's single to center.

Coming into the night, the Bulls were hitting .194 in their first six postseason games, but they finally caught fire, punching out 12 hits and allowing their pitchers to finally settle in with a solid lead.

Providence native Jeff Beliveau struck out three of the four batters he faced before Steve Getz and Adam Libertatore finished off the PawSox the way Kelly started it -- by retiring the last 10 batters.

The PawSox managed three runs in the Finals and were held scoreless over the final 29 innings, totaling seven hits in that span. After dropping the opener, Durham won three in a row for its first Governors' Cup title since 2009.

The Bulls will face the Pacific Coast League champion in the Triple-A National Championship on Tuesday in Allentown, Pa.

"Whenever you have the chance to be in the postseason in Minor League Baseball, it gives you a couple of extra weeks to play," Duncan said. "It allows you to have fun with the guys and celebrate the year you had with your teammates. That's what these moments mean."