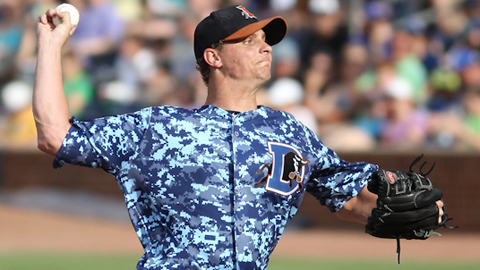 On one side of the International League Governors' Cup playoffs are two teams that have known they'd be in the postseason for several weeks and, truth be told, have been confident of their berths for several months.

On the other side are two clubs who punched their tickets quite late -- so late, in fact, that one of those squads was sweating out its chances on the season's final day.

The semifinal winners will meet in a best-of-5 series for the Governors' Cup championship starting Tuesday, Sept. 10. The IL champ then battles the winner of the Pacific Coast League in the Gildan Triple-A Baseball National Championship Game in Allentown, Pa., on Tuesday, Sept. 17.

Durham and Indianapolis cruised to division titles, and both squads have had plenty of time to plot their strategy for the playoffs. In fact, the Bulls were the only IL team with a winning record in each of the first four months of the season, including an 18-8 April and a 20-9 July that left the rest of the South Division in the dust.

The Indians posted a 20-7 mark in April and still had the IL's best record at the end of May (37-19) and June (55-30) before faltering in July. But the Indians were never challenged and won their division by nine games.

"Whether it's the key guys who get you through a playoff series will play a big role [in determining a winner]."

The two teams topped the IL in pitching, with Durham's 3.33 team ERA the best in the league while Indianapolis ranked second with a 3.43 mark.

The Bulls, who missed the playoffs last season to snap a string of five straight appearances, have been led by J.D. Martin, the league's Pitcher of the Year thanks to a 16-4 record and 2.75 ERA in 27 starts. But Durham also has been solid in the bullpen thanks to Kirby Yates, who has a 1.90 ERA and 20 saves.

While Indianapolis has lost several bullpen stalwarts, most notably Vic Black and his 17 saves, the rotation has been fortified by highly regarded prospect Jameson Taillon, who had a 3.89 ERA and 37 strikeouts in 37 innings in his first six Triple-A starts.

The difference may be that the Bulls have had the league's best offense, topping the IL in team batting average (.267) and runs scored (698). Among its leaders are Vince Belnome, who hit .300 with eight homers and 67 RBIs, and Leslie Anderson, who batted .292 with a team-high 14 home runs and 74 RBIs.

Among the players to watch on offense for Indianapolis, which is a playoff team for the second straight season, are Matt Hague, who hit .285 with eight homers and 69 RBIs, and former Bull Russ Canzler, who batted .252 with 12 homers and 62 RBIs.

While Durham and Indianapolis cruised to easy wins in their divisions, both Pawtucket and Rochester had to play well late to punch their playoff tickets. And both teams did exactly that. Pawtucket, for example, won 17-of-20 to clinch the North Division crown with just three games to play.

"Over the last three weeks, we've played really good baseball," Pawtucket manager Gary DiSarcina said. "For us, it's been our pitching, especially our starting pitching, that's really got us going in the right direction. The defense has been outstanding."

Meanwhile, Rochester used a 20-8 July to vault back into the race, then won its last three in a row, including a 13-3 rout of Scranton/Wilkes-Barre on the final day of the regular season to edge Norfolk for the final playoff spot. The Red Wings and Norfolk finished tied at 77-67, but Rochester won the tie-breaker by winning six-of-eight regular-season meetings.

The Red Sox will look to repeat as Governors' Cup champs after knocking off Scranton/Wilkes-Barre and Charlotte for last year's title. The key to that drive will be to continue to pitch as well as they did in August, when Pawtucket had a 2.82 team ERA.

Offensively, Pawtucket has been led by Jackie Bradley Jr., who hit .275 with 10 homers and 35 RBIs, and a deep group that has helped the PawSox score 663 runs, trailing only Durham and Rochester.

The Red Wings, meanwhile, are making their first Governors' Cup appearance since 2006 and just their second since 1997, when the team won its last title. Despite that recent drought, the Wings have more IL playoff appearances (now 44) and championships (10) than any other franchise.

The Wings recent success has been the result of its offense, which has propped up a pitching staff whose 4.21 team ERA is the worst in the IL.

While IL MVP Chris Colabello has taken his .352 batting average, 24 homers and 74 RBIs to Minnesota, Rochester still gets productions from players such as Jeff Clement, who had 16 homers and 70 RBIs.

The Red Wings pitching staff has been better late in the season, posting a 3.64 composite ERA since the start of August. Leading the way has been Scott Diamond, who was 4-0 with a 2.41 ERA in six late-season starts.

Champs crowned: There will be no Triple Crown winner in the IL this season, although Rochester's Chris Colabello gave it a valiant effort. Colabello won the batting title with a .352 mark, but his promotion to the Twins cost him in the other two categories. Buffalo's Mauro Gomez and Zach Walters of Syracuse tied for the league lead with 29 home runs, while Gwinnett's Ernesto Mejia won the RBI title with 83, one more than Danny Dorn of Toledo.

Pitching plaudits: Kris Johnson of Indianapolis won the IL's ERA race with a 2.39 mark before his promotion to Pittsburgh. Durham's J.D. Martin led the league with 16 wins, while Jairo Asencio topped the IL with 28 saves. Andy Oliver of Indianapolis had 138 strikeouts, five more than Omar Poveda of Gwinnett, but Oliver also lead the league with 112 walks in 124 1/3 innings.

What a way to go: Toledo manager Phil Nevin told his team before its Aug. 31 contest against Columbus that it would be his last as the team's manager, since Detroit has decided it will not renew Nevin's contract for next season. Not only did the Mud Hens win Nevin's last game, beating Columbus, 4-1, but they turned a triple play to end the contest. Gustavo Nunez caught a fly ball in left, then threw out Jeremy Hermida at the plate. After tagging Hermida out, Toledo catcher Bryan Holaday saw that the Clippers' Chun-Hsui Chen had wandered too far off first base, and Chen was tagged out to end the game.

John Wagner is a contributor to MiLB.com. This story was not subject to the approval of the National Association of Professional Baseball Leagues or its clubs.