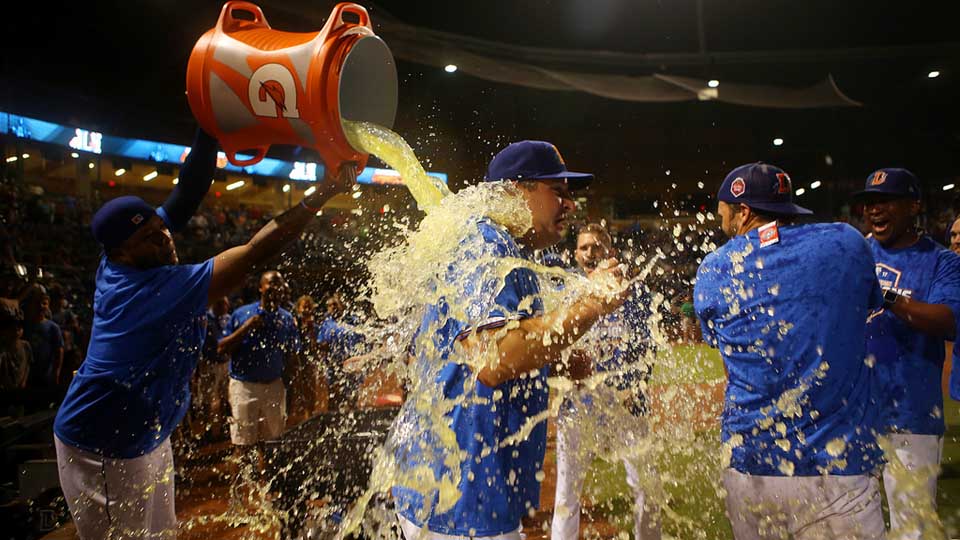 Durham is going to the Governors' Cup Finals for the third time in the last five years. (Durham Bulls)

Indianapolis was done in by one of its own on Saturday night.

Indianapolis native Justin O'Conner delivered a two-out, two-run single in the eighth inning to push Durham into the Governors' Cup Finals with a 4-3 victory over the Indians at Victory Field. The Bulls won the best-of-5 series, 3-1.

"Justin's hit was huge," Bulls manager Jared Sandberg said. "We were down. After getting shut out for a game and a half and then for us to crawl back and for him to provide that hit in the eighth in front of his friends and family was a pretty special moment for him."

It was clear that the game was going to be tight from the start, as Rays top prospect Brent Honeywell and Indians starter Drew Hutchison traded zeros for three innings.

Video: Durham advances to the Finals

Indianapolis struck first on an RBI single by Jacob Stallings in the fourth. Erich Weiss hit a two-run double an inning later to make it 3-0.

The Bulls got back into the game with a pair of runs in the sixth. Taylor Featherston produced one with a double-play grounder and Kean Wong delivered an RBI single.

"We had to deal with a little adversity after we won the first two games," Sandberg said. "We knew they are a good ballclub and they're well-coached. They shut us out last night and [Drew] Hutchison was pitching a shutout through five today and they had all of the momentum. We did a nice job answering with those two runs in the top of the sixth."

After a scoreless seventh, O'Conner stepped to the plate with the bases loaded and two outs in the seventh. The hometown boy ripped a 1-0 offering from Jack Leathersich into center field to score Patrick Leonard and Shane Peterson.

Hunter Wood, Adam Kolarek and Diego Castillo each recorded an out in a 1-2-3 eighth and Castillo shut the door in the ninth to send Durham to the best-of-5 Championship Series, where the Bulls will play Scranton/Wilkes-Barre or Lehigh Valley.

"We have a lot of confidence," Sandberg said. "We had a great season and want to bring back a winning tradition to Durham. Grinding this one out through some adversity there, we're going into the Finals on a pretty high note."

In other playoff action

Brady Lail allowed one run on seven hits and struck out five over six innings to put the RailRiders within one win of a second straight trip to the Governors' Cup Finals. Yankees No. 24 prospect Billy McKinney hit his second homer of the series and Donovan Solano plated a pair of runs to pace the offense. Box score