Rays' No. 8 prospect strikes out nine over seven scoreless innings 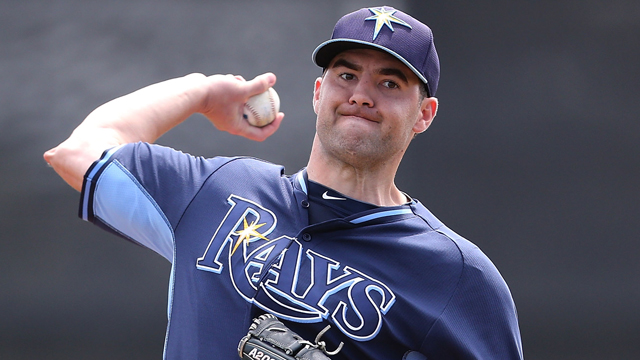 Nathan Karns joined the Rays as part of an offseason trade with the Nationals. (Leon Halip/Getty Images)

Nathan Karns has his early-season adjustment period out of the way and the International League is beginning to take notice.

"After the first two [starts], I was trying to balance some adjustments I made in Spring Training," Karns said after earning his second win of the season. "When you get in those games, your adrenaline's going. Every little adjustment's a large adjustment when you're that jacked up. For me, it was kind of just getting that new season feel out of the way and just get back in the rhythm of how the game goes and slow everything down."

The Rays' No. 8 prospect was terrific for the second straight outing after surrendering six runs in each of his first two starts this season. He beat Gwinnett five days ago, allowing one run on three hits over five innings. Against the Tides, he was even better.

Karns (2-1) did not allow a baserunner until the third inning when he plunked leadoff man David Adams and walked Ivan DeJesus two outs later. He did not yield a hit until the fourth, when Henry Urrutia singled with one out but was erased on a double play off the bat of Caleb Joseph.

"Today, I was just focused on getting strike one, controlling the counts and keeping them in my favor," Karns said. "That was pretty much it -- working in and out, changing speeds, throwing pitches for strikes across the board and pitch to the hitter. Don't try to be too perfect. If they put it in play, I have a great set of defenders behind me and all around me. I just try to do my job and let everyone else do what they're supposed to do."

Karns (2-1) got the lead in the third on a leadoff homer by Mike Fontenot. In the fourth, Jerry Sands scored all the way from first base as Urrutia misplayed a single by Roman Ali Solis.

Wilson Betemit plated Kevin Kiermaier with a seventh-inning sacrifice fly to cap the scoring. Karns and his bullpen did the rest as the 26-year-old turned in his longest outing of the year and matched a season high in strikeouts.

"I just kind of took the approach with what they gave me when I got optioned down during camp," Karns said. "They told me there are some things they want me to work on and improve on. That was just my main goal, to make the adjustments. That's pretty much the only reason I felt like I was optioned down.

"With Neil [Allen], the pitching coach here, he's doing a great job with me every day. He's just trying to put me together. Every day we get to work, and that's all I can do is focus on the task at hand."

Adam Liberatore worked a scoreless eighth for the Bulls before Jeff Beliveau struck out two in a perfect ninth for his second save of the season.

Norfolk starter Suk-min Yoon (0-3) was effective through 5 2/3 innings, allowing two runs -- one earned -- on eight hits while striking out four.