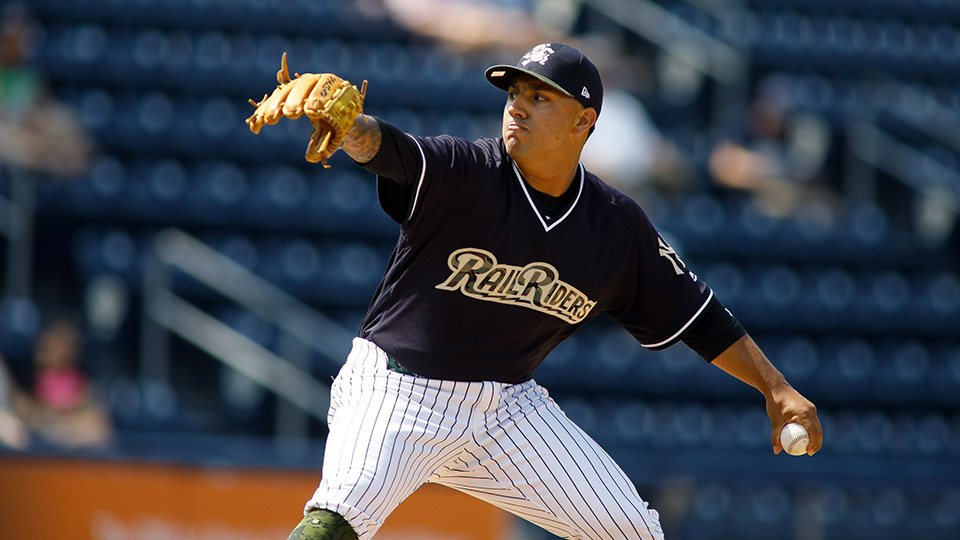 Nestor Cortes went 6-6 with a 3.71 ERA in 23 appearances with Scranton/Wilkes-Barre this season. (Todd Hiller)

Having reached the Majors for the first time in 2018, Nestor Cortes is no stranger to pitching in high-leverage situations. It couldn't get more pressure-packed than coming within a handful of outs of a no-hitter in the playoffs.

The Yankees' left-hander took a no-hit bid into the eighth inning and faced two over the minimum as Triple-A Scranton/Wilkes-Barre blanked Lehigh Valley, 3-0, to take a 2-0 lead in the International League semifinals. Cortes struck out seven and walked one through eight frames.

Video: Scranton/Wilkes-Barre's Cortes with the K

The 23-year-old fell five outs shy of becoming the first Scranton/Wilkes-Barre hurler to throw a no-hitter since Jeremy Cummings on Sept. 3, 2006.

"Nobody was really able to put a good swing on my sidearm fastball," Cortes said. "But [Knapp] was able to do it and sent it up the middle. That's just playoff baseball right there. It's a different animal now. But it was a great game for us and my defense played well behind me. We just clicked on all cylinders out there."

After sitting through a 41-minute rain delay, Cortes took the mound and proceeded to retire 21 of the first 22 batters he faced. His only blemish through the first seven frames was a two-out walk to Mitch Walding in the first inning. From there, the Cuba native set down the next 20 batters he faced on 72 pitches. He got ahead of Andrew Knapp, 0-2, but the backstop found the outfield grass on a bouncer up the middle to spoil the bid. Cortes retired Danny Ortiz on a groundout to second base and ended his 94-pitch outing by fanning Zach Green to complete eight innings for the first time in his career.

"I knew what was going on out there," he said. "You look up and see the scoreboard and you notice. I saw it around the third or fourth inning, and then it's always on your mind. As the game went on and I knew I was getting closer, I tried to bear down even more. My pitches and execution were great all night. He just put a good swing on a good pitch and hit it up the middle."

It's been a whirlwind season for the former 36th-round Draft choice out of Hialeah High School in Florida. After playing the first five years of his career with the Yankees, he was selected in the Rule 5 Draft by the Orioles in December. He made the team out of Spring Training and debuted in The Show on March 31. After posting a 7.71 ERA in four appearances with Baltimore, he was designated for assignment and ultimately returned to New York.

Cortes headed to Double-A Trenton for one appearance before moving up to Scranton/Wilkes-Barre. Between the two levels, Cortes went 6-6 with a 3.68 ERA in 24 outings, including 18 starts.

"It's been a roller-coaster season," he admitted. "Going to Baltimore and making my [Major League] debut was amazing. But I struggled some, so when I came back to the Yankees, the coaching staff and guys down here helped me refocus to be the pitcher I know I am. It's been a nice ride, though, and I'm clicking at the right time. Hopefully we can make a push here towards the end."

Yankees No. 13 prospect Chance Adams struck out two of the three batters he faced in the ninth to complete the one-hitter. It was the first save of his professional career.

One night after hitting a walk-off homer, Mark Payton went 3-for-4 with a triple and two runs scored for the RailRiders. Wilkin Castillo chipped in a solo homer.

Lehigh Valley starter Cole Irvin (0-1) surrendered two runs on six hits and a walk with four strikeouts in seven innings. Philadelphia's 10th-ranked prospect paced the circuit with 14 wins, a 2.57 ERA and a 1.05 WHIP in 26 appearances, including 25 starts.

The series shifts to Lehigh Valley for Game 3 Friday at 7:05 p.m. ET. A Scranton/Wilkes-Barre win would propel them into the Governors' Cup Finals for a third consecutive season.

In other IL playoff action:

Micah Johnson's two-run triple snapped an eighth-inning tie and helped Durham even its semifinal series with Toledo at 1-1. The 27-year-old added an RBI single in the second and finished a homer shy of the cycle. Rays No. 13 prospect Nathaniel Lowe doubled, singled and scored a run. Kyle Bird (1-0) picked up the win with 1 2/3 scoreless innings out of the bullpen. Tigers 10th-ranked prospect Willi Castro homered, drove in two runs and finished a triple shy of the cycle for the Mud Hens. Gameday box score