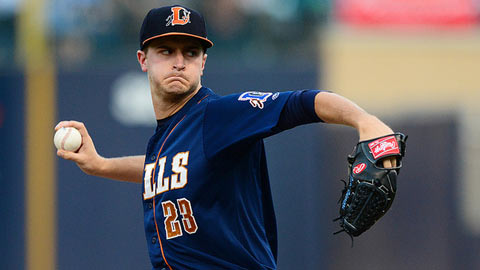 DURHAM, N.C. -- Jake Odorizzi pitched like he belongs back in the Major Leagues with a sterling -- and at times dramatic -- performance for the Durham Bulls in their International League playoff opener.

"It was good, can't really sum it up," Odorizzi said. "Kind of what we needed. Their guy [Brandon Cumpton] was throwing pretty good."

The 23-year-old right-hander most recently pitched for the Rays last week. The only hit Odorizzi allowed was Brett Carroll's two-out single in the second inning. That came after Jared Goedert walked and was caught stealing.

"It just continued from where I left off (before the last promotion)," Odorizzi said. "Doing what I have to do."

Indianapolis threatened in the seventh. Robert Andino got aboard on a throwing error by Tim Beckham and two full-count walks loaded the bases with one out. But the No. 2 Rays prospect struck out Carroll on a full-count fastball and then induced Lucas May's flyout to right-center field to cap a 38-pitch inning.

"All I could do was make my pitch," Odorizzi said. "It was a lot of pitches thrown. I think it was more relief of getting out of that. A happy relief."

It was a lost opportunity for the Indians.

"Against someone like Odorizzi, you've got to get one there," Indians manager Dean Treanor said. "We do that and I think we put it away."

In the bottom of the eighth, Durham's Kevin Kiermaier reached on a one-out double and scored on Beckham's single -- his third hit of the game.

"I feel like it was just my job to put a barrel on the ball and make something happen," Beckham said.

Beckham scored on Vince Belnome's two-out single, though Cole Figueroa was thrown out at the plate by right fielder Carroll to end the inning.

Jeff Beliveau, who was recalled by the big league club without pitching for the third time this season, notched the win with a perfect eighth.

In the ninth, closer Kirby Yates allowed a two-out walk and a single before pinch hitter Russ Canzler -- the 2011 league MVP with the Bulls -- walked to load the bases. May flied out to end the game.

Durham pitchers stretched their scoreless streak to 21 innings, but the Bulls failed to score more than two runs for their fourth consecutive game.

Cumpton, who gave up only one earned run in his last 18 1/3 innings of the regular season, set down 17 consecutive batters during one stretch.

"Just being aggressive, that's his strength," Treanor said. "We haven't been scoring a lot of runs, and we know that. I don't think you can compete any better than (what Cumpton provided)."

Home plate umpire Dave Soucy was struck in the midsection by a pitch in the bottom of the eighth. Four pitches later -- after Beckham's go-ahead single -- he departed and Kevin Bultron moved from second base to behind the plate. There was a 10-minute delay.

James Beresford produced four hits, including a run-scoring double in the first inning, as the Red Wings won the series opener at home. Eric Fryer drove in two runs as Rochester racked up 16 hits.

Bryce Brentz lofted a towering solo homer for Pawtucket in the second inning.

Cole DeVries allowed one run on five hits over six frames to pick up the victory. Gameday box score»

Bob Sutton is a contributor to MLB.com. This story was not subject to the approval of the National Association of Professional Baseball Leagues or its clubs.