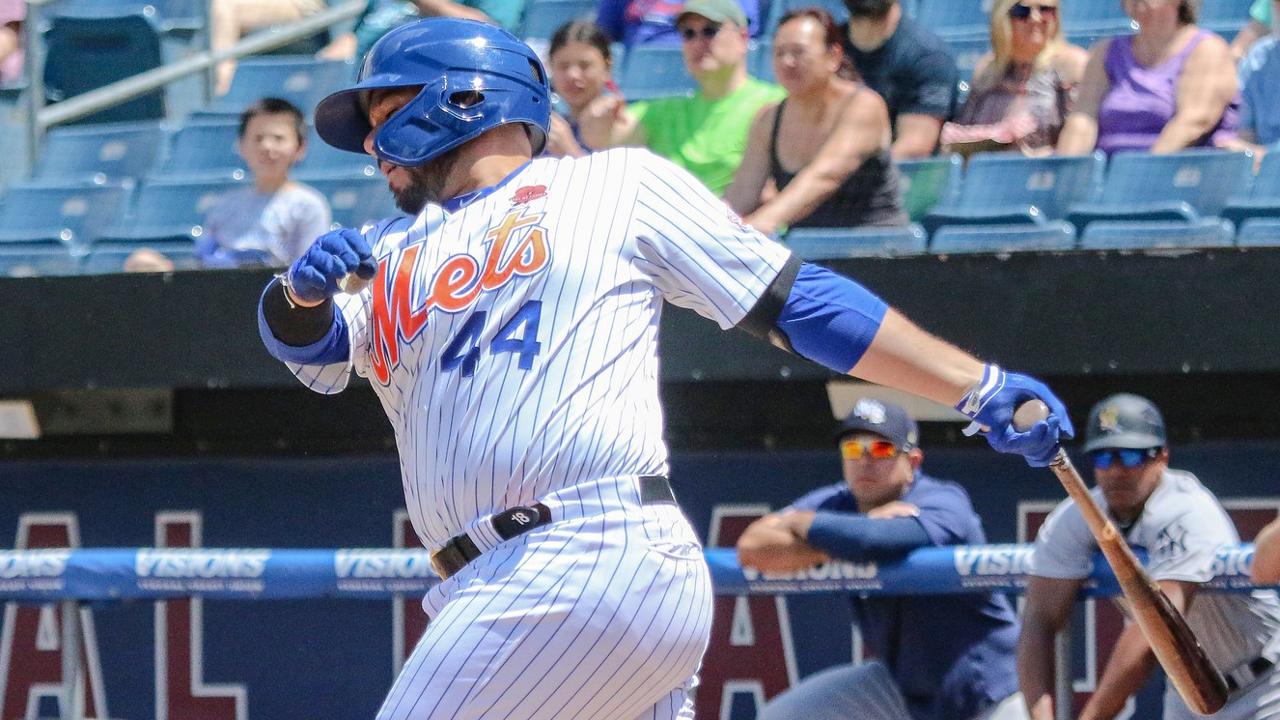 Rene Rivera has collected 12 home runs and 42 RBIs in 57 games for the Syracuse Mets. (Danny Tripodi)

There's a lot of power left in the swing of Rene Rivera.

Rivera got his big day started with a two-run shot to left field off Conor Fisk in the first inning. The 35-year-old got to the right-hander again in the third, smacking a solo shot over the wall in left-center.

After grounding out in the fifth and striking out in the seventh, Rivera smashed the first pitch he saw from righty Jordan Romano to right-center in the ninth, his 12th long ball of the year. It marked his first three-homer game in his 16-year career and his first multi-homer game since belting two for the Mets against San Francisco on June 25, 2017.

"I don't think anyone knew," Syracuse hitting coach Joel Chimelis said. "He was the one that told me that this was his first three-homer game in his career. I was like, 'Wow, that's awesome.' He was pretty excited about it."

The second-round pick by the Mariners in 2001 made his Major League debut with Seattle in 2004. During six separate stints in the big leagues with eight different teams, the Puerto Rico native has amassed 40 home runs, 62 doubles, two triples, 164 RBIs and 110 runs scored in 506 games.

"His body works right," Chimelis said. "He still uses his lower half very well when he gets into position, so he creates some torque when he's going well."

As a veteran, Rivera has the opportunity to help out the young prospects around him. But Chimelis pointed out, he's not the only older player on the team that takes this responsibility upon themselves.

"We have a bunch of older players on the team and each one always tries to help out," the coach said. "They always communicate and if they see something, they let the players know or let me know."

"He's always one of the first ones in the cage and has a routine with a heavy bat and some drills," he said. "They know he's going to be there. He's usually the first one to hit and when he's not, the players are like, 'Hey, where's Rene? What's going on?' So when they see stuff like that it makes everyone else have a routine."

There's only one problem for the 52-year-old coach, and it is a good one to have.

"They wear me out sometimes," Chimelis laughed. "I've been coaching for a while and these guys love to hit and get their work in."

Bo Bichette, MLB.com's No. 8 overall prospect, collected three hits and a walk and scored once for the Bisons.