Rays' patience with prospects results in Triple-A ring for Durham 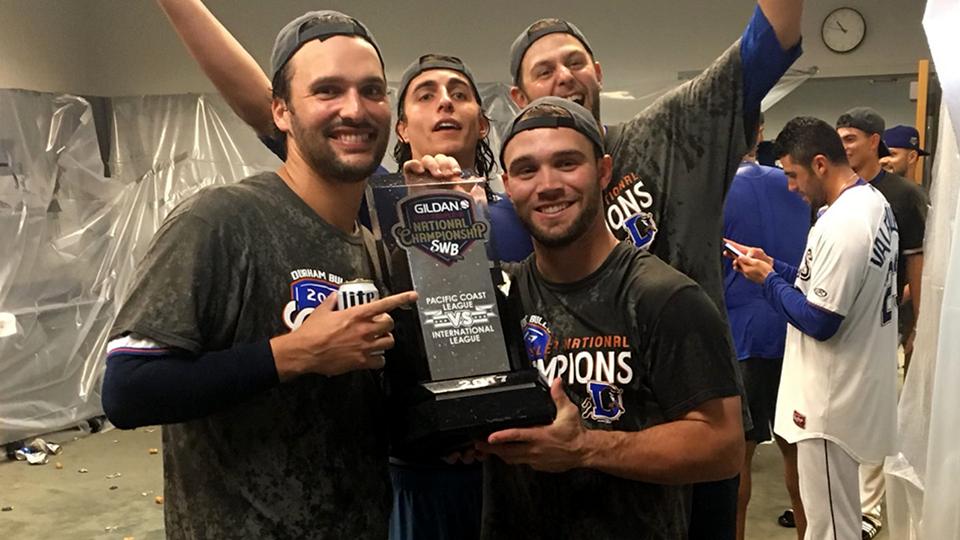 Memphis, a club that survived a bevy of Major League promotions and big trades by the Cardinals to win a level-best 91 games and a Pacific Coast League title, started three players last night who were with team the back in April. By comparison, International League champion Durham fielded seven starters who had been with the Rays' Triple-A affiliate from the Minors' opening month.

When Durham defeated Memphis, 5-3, to claim the Minors' top crown last night, the win seemingly finished a plan the organization laid out from the moment Spring Training camp broke in Port Charlotte about six months ago.

A big part of the focus back then was on a pitching staff that was set to feature ranked Rays prospects Jaime Schultz, Jake Faria, Chih-Wei Hu, Taylor Guerrieri, Ryan Yarbrough and Ryne Stanek, among others -- with the injured Jose De Leon waiting on the disabled list and Brent Honeywell primed for a quick promotion for Double-A Montgomery. However, the spotlight was also on a pair of 21-year-olds and top-100 prospects: first baseman/outfielder Bauers and shortstop Adames, the International League's second- and third-youngest players on Opening Day.

Nothing breeds excitement in the Minors like youth and talent, and the Bulls could sense something special was under way.

"We're definitely younger," said Durham manager Jared Sandberg. "We're talented. We're hungry. They wanted to win. They knew we could win. Guys were sitting around the postgame spread in April saying this is the best team they've ever been on. We just started to roll, continued to win games and got better along the way. We've got some young players, some big-time prospects and they got better. They dealt with some adversity along the way, but they got better as the season went on."

In the case of the club's most prominent offensive stars, it took some time. Bauers, in the midst of a move from first base to the outfield, hit .229 with one homer and a .619 OPS in April, while Adames saw his cold streak last until the end of May, when he still had a .230 average and .653 OPS through 46 games. Being at Triple-A -- one step from their goal of making it to Tampa Bay -- both sluggers needed to stop trying to force a call-up before they could really take off. Bauers called the strategy "staying in Durham while you're in Durham."

• Recap: "Wong does it all as Bulls win Triple-A title" »

Bauers hit .270/.375/.437 with 11 homers in 111 games from May 1 on and eventually took back full-time first-base duties after Casey Gillaspie was traded to the White Sox in late July. Adames took a little longer to hit his stride, but when he did, he showed his true potential, hitting .303/.389/.455 in his final 84 games once the calendar flipped to June. The Dominican Republic native even earned a spot in the Triple-A All-Star Game.

But even as big-name prospects struggled at the plate, the team itself still managed to forge a winning identity, entering the All-Star break with a 55-34 record. Patrick Leonard played a big role in that. The 24-year-old slugger was the IL's Player of the Month for April after hitting .412 with a 1.027 OPS in his first 22 games, also earning a trip to the midsummer classic. Peterson, an offseason Minor League free agent signing, was twice added to the Rays' 40-man roster and twice designated for assignment but consistently produced during his time in the IL, hitting .286/.313/.504 with 12 homers and 10 steals in 76 games.

Meanwhile, pitching dominated, just not necessarily with the names expected. Schultz -- the IL strikeout leader in 2016 -- managed only 11 2/3 innings out of the bullpen due to a groin injury. Guerrieri made only two starts before elbow issues shut him down in April. De Leon (right forearm) couldn't shake the injury bug either, making only three starts during his first season in the Tampa Bay system. Faria and Hu combined for 120 2/3 innings at Triple-A because of Major League call-ups.

Those left did a tremendous job of picking up the pieces. The Bulls set an IL record with 1,421 strikeouts, 172 more than any other staff in the Triple-A circuit. Yarbrough led the way with a league-best 159 in 157 1/3 innings with Honeywell, who was promoted from Montgomery after only two starts, not far behind with 152 in 123 2/3 frames. Yonny Chirinos also enjoyed a breakout year after moving up from Double-A on May 2, finishing with a 2.74 ERA, 120 strikeouts and 22 walks in 141 innings.

The Bulls finished the season 86-56, 15 games ahead of Gwinnett for the IL South Division's best record and just half a game behind Scranton/Wilkes-Barre for the circuit's best mark.

On an individual basis, Triple-A success is defined by what a player can do to jump to the game's highest level. The Rays announced after Tuesday's game that only Hu, infielder Daniel Robertson and the rehabbing Xavier Cedeno will be called up to Tampa Bay. The season is over for the rest.

This is not the first time the Rays have preached patience with big Triple-A names. The last time the Rays had a top-ranked talent knocking down the door from Durham was Blake Snell in 2015, when he climbed three levels to post a 1.41 ERA with 163 strikeouts in 134 innings. He still made 12 starts for Durham at the start of the following season. If the Rays' three top-100 prospects are looking for sympathy come Spring Training in Port Charlotte, they might find it at Snell's locker.

The Cardinals have taken a different tact, albeit with similar Triple-A results. Cases could be made that top-eight prospects Carson Kelly, Jack Flaherty, Harrison Bader and Magneuris Sierra should have been on the field in Moosic on Tuesday. Instead, St. Louis summoned them to the Majors in their quest to chase a National League Wild Card spot, leaving No. 4 Tyler O'Neill and No. 8 Dakota Hudson as the only top-ranked prospects to start the National Championship. The Cards sit 3 1/2 games back of the Rockies in that hunt. The Rays, by comparison, are five games out of a crowded AL field. It's difficult to argue they couldn't close that gap with some help from Honeywell's arsenal, Adames' glove and bat and Bauers' solid hit tool and improved speed.

The Durham skipper hinted that his organization would rather see their prospects become finished products and enjoy sustained Triple-A success before pushing them to the biggest stage.

"It all depends where the big league team is in its state on the current day," Sandberg said. "They've called up some young players here and there. They've let prospects pay their dues, take their lumps and develop. But I mean, this is an exciting core of young position players that we have. We've sent countless pitchers to the big leagues, but to have these position players knocking on the door is pretty exciting."

Bauers believes there's something to be said for consistency.

"I think just having an easy clubhouse to walk into everyday helps," he said. "It makes the season go by a little easier when it can become a grind, part of it. A lot of us have been here just this season, but it goes back to three seasons now, at least since I've been here. It's been the same group of guys that I've been around. We're all buddies. We're all boys. We're all going out to eat after the games, before the games, hanging out on off-days. It makes the season go by quicker. It makes the game more fun when you're playing with your friends. Everything's going to be more fun."

The Bulls reaped the rewards Tuesday, perhaps none more than game MVP Kean Wong, who went 3-for-4 with a grand slam and made several key plays at second base. Like the others, Wong was with the club Opening Day, only to be sent down to the Southern League for 12 games in May. The message his manager and teammates delivered Tuesday was a little different after months of patience paid off.

"Guys were joking in the dugout, saying hey, this is going to put you on the map," Sandberg said. "This is going to get you into the big leagues and onto the 40-man roster. It definitely elevated him. This game can elevate you because everyone's watching. Obviously, we're super proud."

The goal for every Triple-A club back in April might have been to win Tuesday's tilt, but it was also to develop players into future Major League stars. The Rays are hoping they threaded the needle by accomplishing both goals, and the newly ringed players can feel it.

"I think you saw it with the Royals a couple years ago," Bauers said. "They kept that core group of guys together. They won championships all the way through the Minors, and they won the World Series. So I think for us, a lot of our mind-sets -- obviously, it's a little premature -- but next thing, we'd like to win a World Series together. I think we have a good core group of guys who can help the big league team. Whenever we get the opportunity, we'll see what happens."