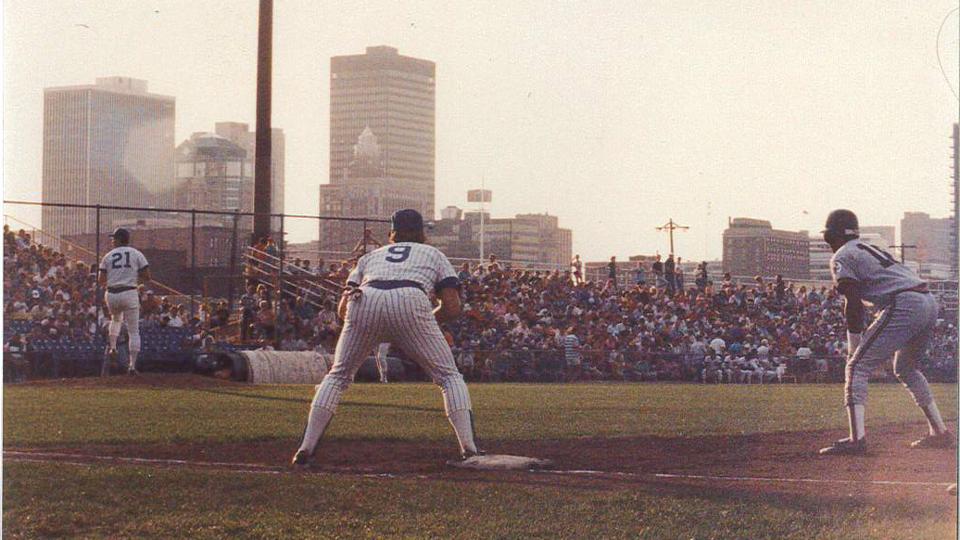 And for parts of three centuries - the 19th, 20th, and now the 21st - the national pastime would be an important part of life in the capital city.

Professional baseball would come and go as leagues and teams rose and folded. The Hawkeyes became the Colts and Prohibitionists of the Western Association. The Western League teams had nicknames that included Midgets, Undertakers, Underwriters, Champions, Champs, Boosters, Demons and Bruins. Since 1969, Des Moines has been fortunate to lay claim to a Triple-A franchise. The Iowa Oaks were among the six American Association teams that year. And in 1982, the Oaks became the Cubs - one year after they became the Chicago Cubs' top minor league team.

But there is more to the history of professional baseball in Des Moines than names and dates.

• The first games in 1887 were played at Athletic Park on the old Polk County Fairgrounds in front of Seventh Street along the Raccoon River. And according to baseball historian Jay Sanford, here are some interesting anecdotes of the early years:

• In 1890, to attract fans to the ballpark, the team owners tried novelties such as balloon ascensions, Ladies' Day, parachute jumps and even a May Day festival. But because of low attendance, the franchise moved to Lincoln, Neb., in August that season.

• In 1894, baseball returned to Des Moines. Although the team was known as the Prohibitionists, one newspaper account noted that "Gambling syndicates are numerous and players are heavy drinkers."

• In 1896, Des Moines won an all-time Western League record 26 straight games, and many of the league teams pulled out. Still, because of lack of attendance, Des Moines' home games were moved to Ottumwa.

• In 1910, the Des Moines team was forced to play on the road for six weeks due to poor support at home games.

• On May 2, 1930, the first night professional baseball game under permanent lights was played in Des Moines. The Demons defeated Wichita, 13-6.

• In 1947, professional baseball return after a 10-year absence as Pioneer Memorial Stadium was built on the current site of the stadium.

• In 1969, after seven years without professional baseball, the Iowa Oaks made their debut.

• In 1970, Iowa pitcher Vida Blue led the American Association with 165 strikeouts, including 16 in one game. Both records still stand.

- In 1973, the Oaks won 22 games in July en route to the American Association Eastern Division title.

• In 1981, the Oaks became an affiliate of the Chicago Cubs. A year later the team changed name to the Iowa Cubs.

• In 1993, the Iowa Cubs won the American Association title.

• In 1998, the Iowa Cubs won the Pacific Coast League Central Division title. A crowd of 13,660, then the largest ever at Sec Taylor, watched a Fourth of July fireworks show.

• The Iowa Cubs won 24 of their last 32 regular season games to win the PCL Central Division title in 2001.

• In 2002, the Iowa Cubs broke the franchise record for attendance, topping the half-million mark for the first time. A total of 509,384 fans saw the Iowa Cubs play.

• On June 24, 2005, a crowd of 13,669 - then the largest in stadium history - watches Chicago Cubs pitcher Kerry Wood in a rehab assignment start and a post-game fireworks show.

• In 2007, the Iowa Cubs set a new franchise record with 576,310 people passing through the gates at Principal Park.

• In 2008, the Iowa Cubs finished with a 83-59 record, winning the American North Division. Their .585 winning percentage was the highest in the Pacific Coast League. The 2008 season marked the 40th of triple-A baseball in Des Moines. On June 14, 2008, no fans were admitted to the home game against the Nashville Sounds after floods hit Des Moines and voluntary city evacuations were in order. On August 9, the I-Cubs hit a franchise record eight home runs in one game in a 15-3 victory against the Round Rock Express.

• In December of 2009, the Iowa Cubs hired Baseball Hall of Fame Inductee, Ryne Sandberg as manager for the 2010 season.

• During the 2014 season, the Cubs welcomed the 15-millionth fan to the new Principal Park.

• Following the 2014 season, President and General Manager Sam Bernabe was named Baseball America Minor League Executive of the Year. The award came in Bernabe's 31st season with the organization.

• In 2015, Principal Park installed a state-of-the-art HD Daktronics video board above the bleachers in right field. The grounds crew also installed a new playing surface prior to the season, comprised of 265 tons of sand and two-and-a-half acres of sod.

• Prior to the 2016 season, Principal Park also extended the backstop netting to the far ends of each dugout to increase the safety of fans. The I-Cubs were the first team in the PCL to announce the netting extension and were pioneers of Major League Baseball's recommendation that each ballpark follow suit.

• In 2016, the Chicago Cubs made their historic run to the team's first World Series title in 108 years. Of the players on the postseason rosters, 19 had played in an Iowa Cubs uniform.

• In 2017, Principal Park became one of the first in the country to install LED lighting. In 2017, too, another Daktronics video board was added, this one in left field. Principal Financial extended its naming-rights contract until 2027 and the team extended its lease on the city-own park until 2037.

• 2018 brought the 50th season of Triple-A baseball in Des Moines. On April 12 Manager Marty Pevey surpassed Joe Sparks to become the winninest manager in Iowa's history with victory number 356. Pevey, in his sixth season at the helm of the I-Cubs, also earned his 1,000th career managerial win in the same victory over Nashville.