BACK TO BACK: Generals rally past Biloxi, 6-2, for second straight title 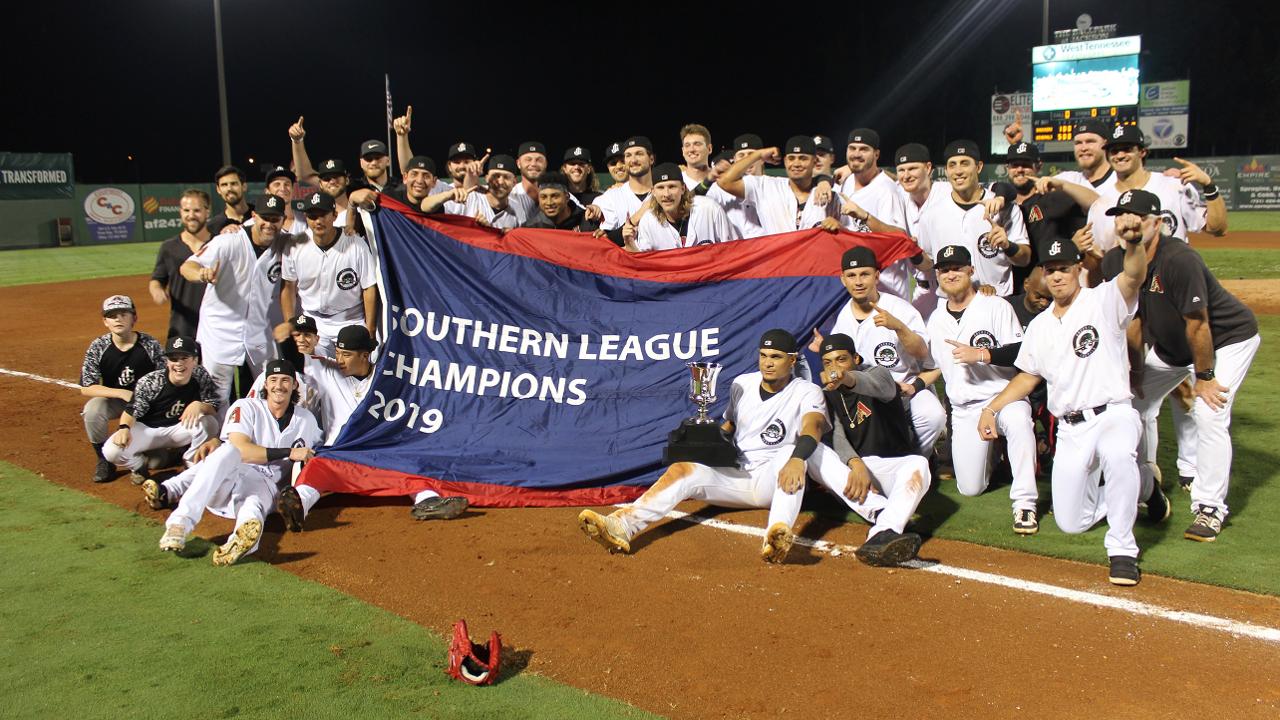 The Jackson Generals beat Biloxi, 3-2, in the BC Powder (R) 2019 Southern League Championship Series with a 6-2 win in the finale. (Chris Dishman)

Jackson, Tenn. - The Jackson Generals, the Double-A affiliate of Major League Baseball's Arizona Diamondbacks, charged past the Biloxi Shuckers with a five-run first inning on Sunday night, rallying to claim a 6-2 victory and take home the 2019 BC Powder ® Southern League Championship.

The Generals won the SLCS, 3-2, to become the first team since the 2011-2012 Mobile BayBears --- another Diamondbacks affiliate --- to earn back-to-back Southern League titles.

For the second time in two seasons, Emilio Vargas (1-0, 1.29 ERA) got the ball with the championship hanging in the balance, and the 23-year-old delivered the goods again. Vargas allowed a first-inning run to Biloxi on a double by Cooper Hummel and an RBI single by Weston Wilson, but he didn't give in again. Vargas allowed just three hits after the first inning and five in total, finishing seven innings with nine strikeouts and no walks. The seventh-year pro retired fifteen of the final sixteen men he faced, including thirteen in a row between the bottom of the second and the top of the seventh. In relief of Vargas, Miguel Aguilar tossed a clean eighth inning to finish the playoffs with a 0.00 ERA. Biloxi scored on West Tunnell in the top of the ninth with two walks and an RBI single by Bruce Caldwell. However, the right-hander finished with a flourish, inducing a groundball double-play completed by shortstop Galli Cribbs Jr., second baseman Camden Duzenack, and first baseman Pavin Smith that brought the Generals' reserves racing out of their dugout in jubilation.

Down a run entering the bottom of the first, the Generals offense whirred to life with singles by Ben DeLuzio and Daulton Varsho to put two men on base. Pavin Smith smacked a grounder off the hip of Biloxi starter Drew Rasmussen (0-1, 135.00 ERA) that caromed toward second baseman Bruce Caldwell, allowing DeLuzio to score the tying run. Drew Ellis followed by slapping an RBI single to left that brought home Varsho for a 2-1 lead. After Seth Beer was hit by a Rasmussen pitch to put two men aboard, Ramon Hernandez crushed a two-run triple to the gap in right-center, pushing the lead out to 4-1 and chasing Rasmussen from the hill. In his place, Tyler Spurlin gave up a run-scoring hit to Renae Martinez that made the lead 5-1, where it would hold until the seventh inning.

After Smith led off the bottom of the seventh inning with a single, Ellis wore a pitch from Biloxi's Anthony Bender to put two men aboard. A wild pitch by Bender pushed Smith and Ellis into scoring position, and Hernandez hit a sacrifice fly to right that gave Smith time to score the Generals' final run in 2019. Varsho earned Southern League Championship Series MVP honors by batting .300 (6-for-20) with six hits, four runs scored, nine total bases, and three RBI while playing both in centerfield and behind the plate. Beer had a superb series, pouring in seven hits with nine total bases, and a team-high .438 batting average. Hernandez was equally clutch, batting .333 (6-for-18) while recording a team-high five RBI with six hits and eight total bases.

Manager Blake Lalli and the Jackson staff of Doug Drabek, Rick Short, and Jorge Cortes oversaw a Generals team that set a franchise record for home runs in the 2019 regular season (128) despite losing five games to inclement weather. Drabek's pitching staff registered top-three marks in franchise history for walks-per-nine (3.2), strikeouts-per-nine (8.5), and strikeout-to-walk ratio (2.61). The Generals' four titles in the 21st century are now the second-most in the league behind Jacksonville (5).