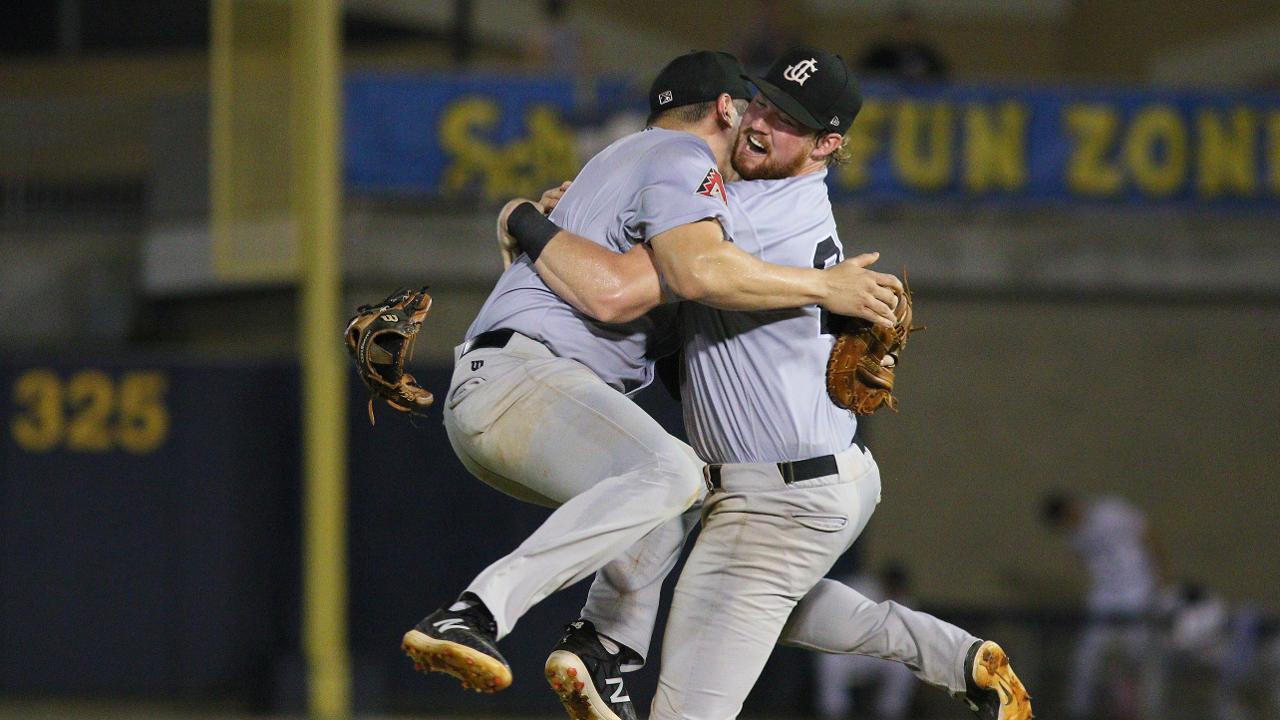 BILOXI, Miss. - The Jackson Generals, the Double-A affiliate of the Arizona Diamondbacks, used a ninth-inning rally to beat the Biloxi Shuckers on Saturday, winning the 2018 BC Powder ® Southern League Championship Series with a 3-2 victory at MGM Park.

Facing Southern League All-Star closer Nate Griep (0-1) with the game tied 2-2 in the top of the ninth, Jackson made their move. After an inning-opening strikeout by Rudy Flores, Generals third baseman Marty Herum fouled off an 0-2 pitch from Griep and bopped a single up the middle to put the tying run on base. Griep fought back to record his second strikeout of the inning, setting down Jay Gonzalez on six pitches to bring up catcher Dominic Miroglio. The Jackson backstop, a playoffs revelation, lined his 15th postseason hit into center field, moving Herum into scoring position at second base.

With the title hanging in the balance, Jackson skipper Shelley Duncan put his trust in a veteran, calling on 27-year-old outfielder Evan Marzilli to pinch-hit for shortstop Galli Cribbs. Marzilli, a two-time national champion in college with South Carolina, stepped to the plate with no previous at-bats against Griep during the regular season. Griep had gone 13 appearances without giving up an earned run, working 16 scoreless innings since allowing three runs at Jackson on July 27. Marzilli put that history aside and made some of his own.

On a first-pitch changeup, Marzilli ripped a double just inside the first base bag, scoring Herum from second base to catapult the Generals in front, 3-2. Biloxi's Trent Grisham and Keston Hiura combined on the relay throw from the right field corner to nab Miroglio at home plate for the third out, sending the game into the final half-inning with Jackson needing three outs to seize the trophy. The game-breaking hit marked Marzilli's second consecutive at-bat with a run-scoring double, bearing resemblance to his Game 3 plate appearance in the eighth inning that also scored Herum.

For the fourth time in the playoffs, Jackson closer Kevin Ginkel (S, 1) entered with the Generals on top. The Southern League's BC ® Relief Pitcher of the Month in August needed only three batters to crystallize the win, inducing a groundout from Hiura and a strikeout by Lucas Erceg for the inning's first two outs. Weston Wilson bounced a full-count offering to Herum at third base, and Herum's successful toss across the diamond to Flores sent the two corner infielders rushing towards each other, meeting at the mound in a leaping embrace as teammates streamed out of the dugout to join the celebration.

Knowing a victory would equal a banner, Jackson right-hander Emilio Vargas bounced back from a rough outing in the North Division Series with a strong start on the hill. The 22-year-old native of the Dominican Republic pitched five innings against a loaded Biloxi lineup that featured five of the Milwaukee Brewers' top prospects, including Southern League MVP Corey Ray. Vargas worked quickly and gave up only one earned run, a solo home run by Troy Stokes Jr. in the fourth inning. Vargas finished his day with eight strikeouts and no walks on 76 pitches, facing three batters more than the minimum before turning the game over to the bullpen.

In relief, Miguel Aguilar entered with a 2-1 lead in the sixth inning and allowed his first earned run since August 18, permitting Biloxi to tie the game on an RBI single from Hiura that scored Stokes. Michael Blazek (W, 1-0) followed with two scoreless frames that allowed the Generals to enter the ninth inning neck-and-neck with the South Division champs.

At the plate, Kevin Medrano started the game with an early bang. The Southern League batting champion whacked a two-run homer off the top of the right field wall in his first at-bat, giving Jackson a 2-0 lead in the top of the first. League Championship Series MVP Domingo Leyba had a quiet night on Saturday after a 4-for-6 effort in Game 3, ending the playoffs with a 14-for-40 mark at the plate, two home runs and a league-best 11 RBI. Vargas collected his first professional hit with a lined single to right center in the second inning. Miroglio went 2-for-4 to complete a dazzling playoff run in which he batted a league-high .484 (15-for-31) with nine runs scored and 7 RBI.

For Duncan, the 2018 Southern League title is his first championship shared with hitting coach Vince Harrison, and the second he shares with pitching coach Doug Drabek and coach Javier Colina. Duncan, Drabek, and Colina won the Northwest League title with the 2015 Hillsboro Hops, a short-season Arizona Diamondbacks affiliate that featured 2018 Generals players Cribbs, Jared Miller, Tyler Mark, Justin Donatella, Kirby Bellow, Raymel Flores, and Jose Queliz. The Generals are the only Arizona Diamondbacks affiliate to win a league championship in 2018.

The Jackson Generals, a West Tennessee franchise since 1998, are the Double-A minor league affiliate of Major League Baseball's Arizona Diamondbacks. In 2017, The Ballpark at Jackson was named the Professional Sports Field of the Year by the Tennessee Turfgrass Association.