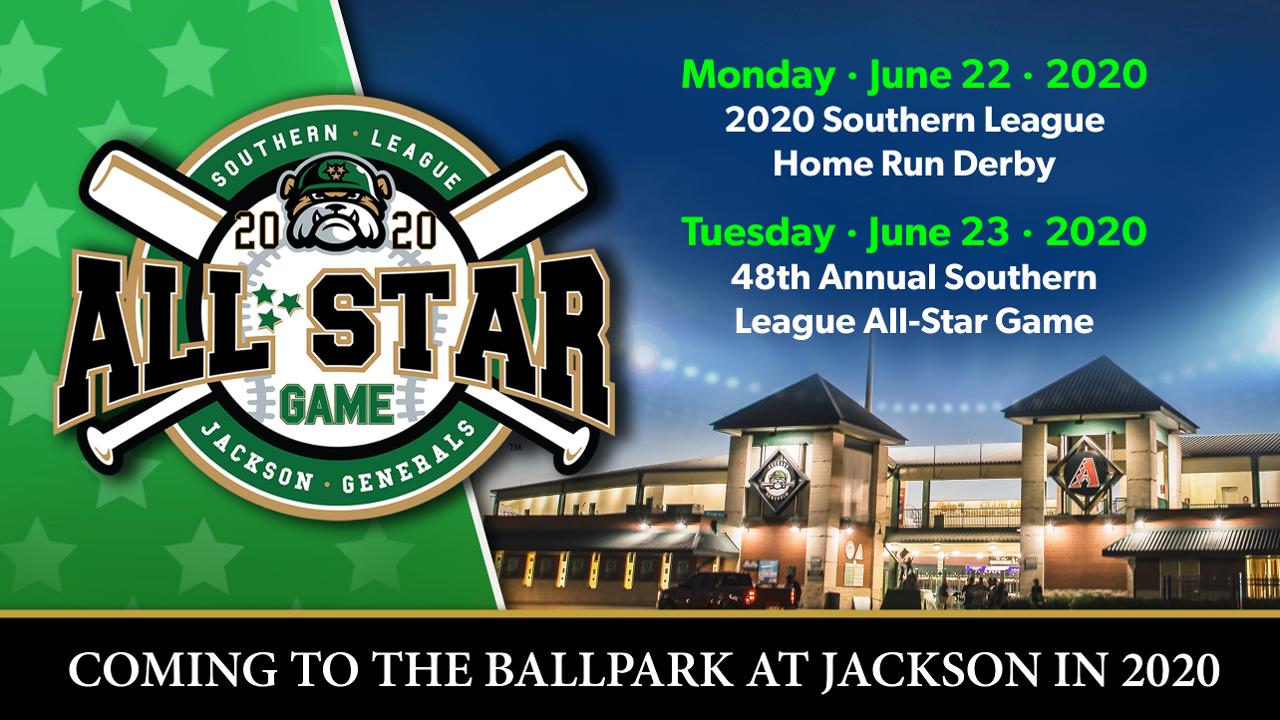 (Logo and art by Sheila MacDiarmid/Photo by Dave Wegiel)

Jackson, Tenn. - The Jackson Generals, the Double-A affiliate of Major League Baseball's Arizona Diamondbacks, will have the privilege of hosting the 2020 Southern League All-Star Game at The Ballpark at Jackson, according to an announcement made in consultation with the Southern League this week.

This will be the first Southern League All-Star Game hosted by the Generals since 2011, and Jackson's first as an Arizona Diamondbacks affiliate. The Southern League's 2020 All-Star Break events will occur June 22-23, 2020, with the game being played on the evening of Tuesday, June 23, 2020.

"The Jackson Generals are thrilled to host the 2020 Southern League All-Star Game," Generals assistant general manager Marcus Sabata said. "The talent in the Southern League is second to none, and we couldn't be more excited to gather these future Major Leaguers in Jackson for a few days next June. Make plans now, because it will be a must-see event."

"Having the Southern League All-Star Game back in Jackson will be an exciting event for Jackson and all of West Tennessee," Jackson Chamber president and CEO Kyle Spurgeon said. "We look forward to welcoming players and fans to what promises to be a memorable mid-summer celebration."

This year's 2019 All-Star Game was hosted by Biloxi, with the North Division claiming a 7-3 win. Luis Robert of Birmingham was named Most Valuable Player, and Generals Riley Smith, Bo Takahashi, Daulton Varsho, Drew Ellis, Jamie Westbrook, and Jeffrey Baez all contributed to the victory. Baez and Westbrook also starred in the 2019 Home Run Derby, which Baez won.

"The Southern League is so pleased to have the 52nd annual All-Star Game return to The Ballpark at Jackson next year," Southern League president Lori Webb said. "We look forward to featuring a lot of talent at 4 Fun Place, and we will see if the North Division can prevail again! We hope the Jackson community will support their team and watch some of the best prospects the Southern League has to offer playing in their home town stadium."

The league's top performers will descend upon Jackson at the midway point in the season on Monday, June 22, 2020, along with scouts, team executives, media, and fans from around the country. Specific details regarding the 2020 Southern League Home Run Derby, additional All-Star Game shoulder programming, and a first-pitch time for the Southern League All-Star Game on Tuesday, June 23, 2020, will all be finalized at a later date. The Southern League's full 2020 schedule of games is expected to be released later this week.

"We plan on pulling out all the stops to make this a memorable event for players and fans alike," Sabata said. "West Tennessee has been so good to the Generals and the Southern League. We look forward to showcasing all the elements that make this city and area special."

Information on tickets for the 2020 Southern League All-Star Game, as well as season tickets for the Jackson Generals' 2020 campaign, will be made available in a subsequent release. Twenty regular-season home dates remain for the Generals in 2019, and single-game tickets can be purchased either in person at The Ballpark at Jackson's box office or online at JacksonGeneralsBaseball.com. Group outings --- including picnics, birthday parties, Field of Dreams celebrations for youth teams, and luxury suite and party deck rentals --- can also be made by phone at 731.988.5299.