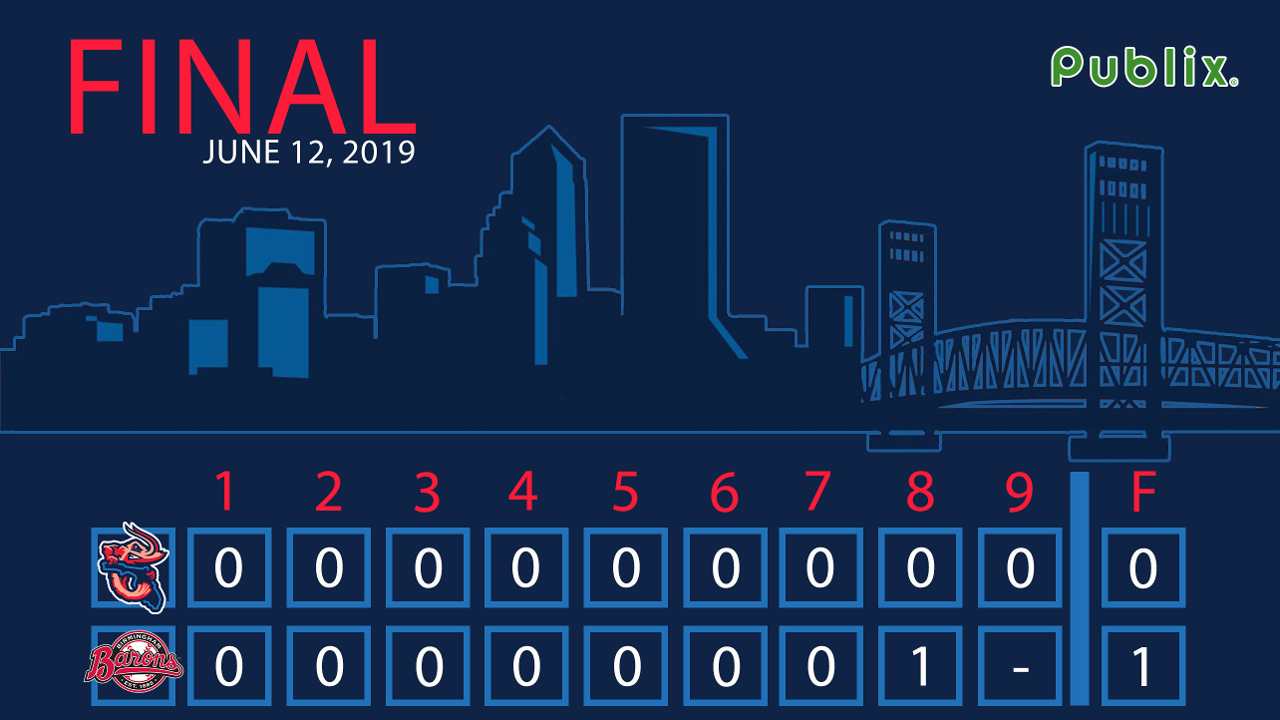 BIRMINGHAM, Ala. - The Jacksonville Jumbo Shrimp (25-41) fell to the Birmingham Barons (27-38) by a 1-0 score in the first game of the five-game series at Regions Field on Wednesday night.

Jacksonville right-handed starting pitcher Kolton Mahoney worked the first six innings of his spot start in perfect fashion, striking out five batters as he retired the first 18 Barons batters of the game in order. Mahoney was pulled from the game after those six innings, and Jacksonville right-handed relief pitcher Brett Graves continued a bid for a combined perfect game by working a perfect bottom of the seventh.

Graves walked the first two batters of the bottom of the eighth. Then Luis Gonzalez delivered an RBI single up the middle to score Ramon Torres from second to give the Barons a 1-0 lead, which would be the final. That hit was the only one for the Barons in the game.

Birmingham right-handed relief pitcher Luis Martinez (3-1) earned the victory, while Graves (1-4) took the loss for Jacksonville. Birmingham right-handed relief pitcher Nick Burdi earned his third save of the year by working a perfect ninth. Barons right-handed starting pitcher Blake Battenfield had a no decision, working five scoreless innings with two walks and six strikeouts.
The Jumbo Shrimp and Barons will continue their series with the second game of the five-game set on Thursday night at 8:05 p.m. eastern. Right-handed pitcher Jorge Guzman (2-6, 3.93 ERA) will start for Jacksonville against Birmingham left-handed pitcher Tanner Banks (1-3, 3.00 ERA). Fans can listen to the game on the Jumbo Shrimp Network presented by Community First, beginning at 7:50 p.m. with the pregame show "Shrimp On Deck" locally on Sunny 102.3 FM, on the TuneIn Radio app, and www.jaxshrimp.com.
ABOUT THE JUMBO SHRIMP: The Jacksonville Jumbo Shrimp offer affordable family fun at the Baseball Grounds of Jacksonville. Their inaugural season garnered the Southern League's Don Mincher Organization of the Year, Promotional Trophy and Jimmy Bragan Executive of the Year, won by General Manager Harold Craw. To experience the excitement with the terrific value of ticket and group options, call the Jumbo Shrimp at (904) 358-2846 or visit www.jaxshrimp.com.