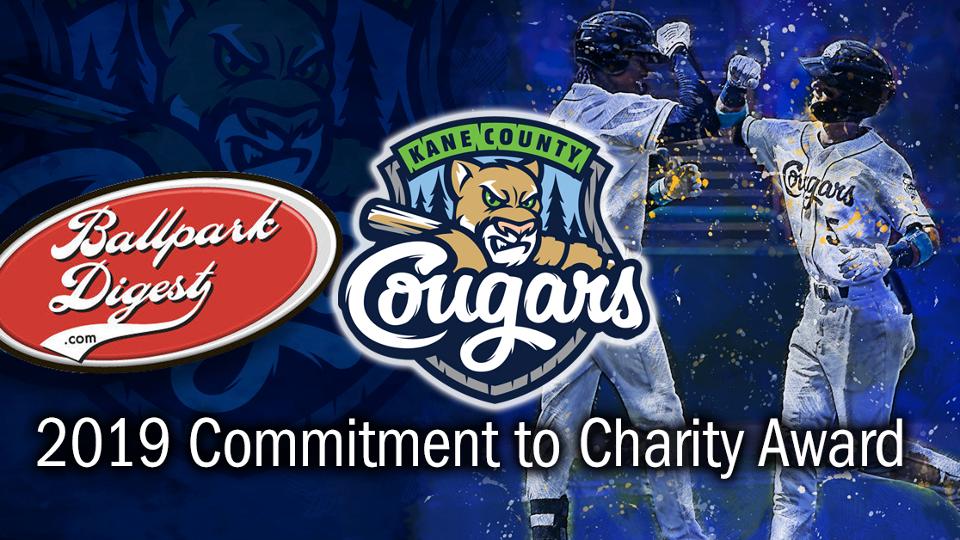 GENEVA, Ill. - The Kane County Cougars, minor league affiliate of the Arizona Diamondbacks, have been announced as the 2019 Ballpark Digest Commitment to Charity Award winner. Since 2015, the award has been handed out to the team that has shown growth in their charitable giving and community programs making the Cougars one out of 160 teams across the country to be recognized by Ballpark Digest for their charitable outreach this season.

In 2018, the organization announced A Million Smiles campaign with a fundraising goal of $1 million. The goal was surpassed thanks in part to over 20 local programs that have been put into place via the Kane County Cougars Baseball Foundation, including the Cougars Reading Club and the Summer Reading Program which helped raise over $750,000.

This season, two new programs were implemented to expand the organization's community outreach with Mental Health Awareness and Deaf Awareness Night. Local charities were selected that focus on improving the quality of lives for those who deal with mental illness and hearing impairments. For each strikeout recorded by a Cougars pitcher during those two nights, the Kane County Cougars Baseball Foundation made a $100 donation with a portion of the total proceeds provided to the selected charities.

Another unique program that was recently implemented is in partnership with AmazonSmiles. Fans who purchase items on Amazon can select the Kane County Cougars Foundation as their desired charity to receive one percent of the purchase and assist in the expansion of the Foundation's local reach.

"Our goal has always been not only to give back to our community, but also to honor the people of our community," said Cougars owner Dr. Bob Froehlich. "Each of our programs is focused on how we can give back and it has helped us to strengthen our community relationships. When people hear the name Kane County Cougars, they know that we are about more than just baseball."