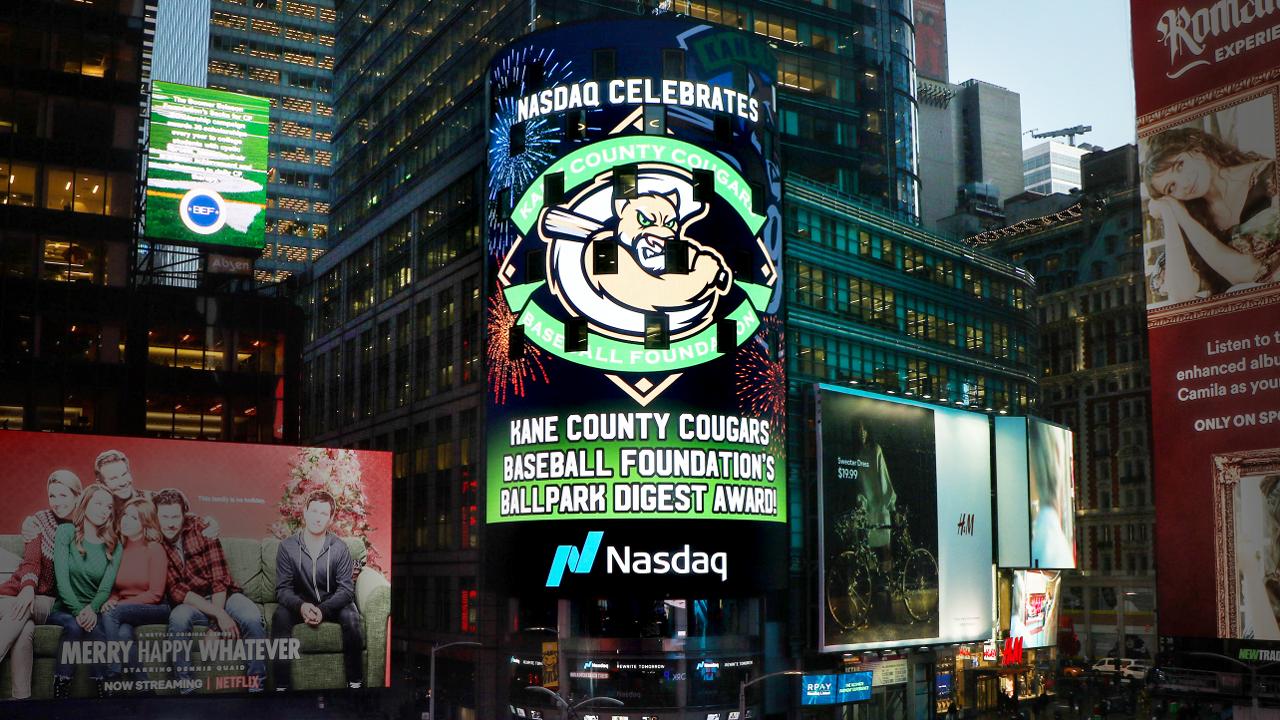 Located at 43rd and Broadway in New York City, the high-tech electronic display is over seven stories tall and wraps around the NASDAQ building providing financial news, market highlights and advertisements. Featured in films, TV programs and news articles the modern-day icon is illuminated 24 hours a day and receives worldwide coverage.

Since 2015, Ballpark Digest has selected one team among the 160 total MiLB teams to receive their prestigious Commitment to Charity Award. The 2019 season represented a record-setting year filled with milestones for the Kane County Cougars Baseball Foundation which led to their selection for the award.

The Cougars Foundation giving exceeded $1 million in 2019, marking the second consecutive year of giving above and beyond the $1 million milestone. The Cougars were also ranked fifth overall following the issue of MiLB's Charity Report for 2018 which covers the charitable giving for all 160 Minor League Baseball teams. This marks the second consecutive year the Cougars have been ranked in the top ten teams for charitable giving.

The Kane County Cougars Baseball Foundation now manages 24 individual charity programs, the largest number of programs in the Foundation's history. These programs provide cash contributions to 32 different community organizations which is also the largest number of recipients in the Foundation's history. Additional highlights for the 2019 season included the Cougars Reading Club reaching over 450 schools with 138,000 students participating in the organization's reading incentive program as well as the Summer Reading Program which included 89 libraries with over 5,400 students participating. The Cougars Foundation also operates two scholarship programs issuing six scholarships to grade school children as well as five college scholarships. In addition to the reading and scholarship programs, the Foundation's Military Outreach touched over 1,100 current and former military service members with the Senior Citizens Outreach touching over 2,500 local citizens over the age of 65.

Anticipation is high for the 2020 season as the Cougars celebrate their 30th anniversary. Several capital improvements will be made at Northwestern Medicine Field, home of your Cougars, to enhance the fan experience. In addition, a special logo reveal and 30th-anniversary team will be announced starting in mid-January.