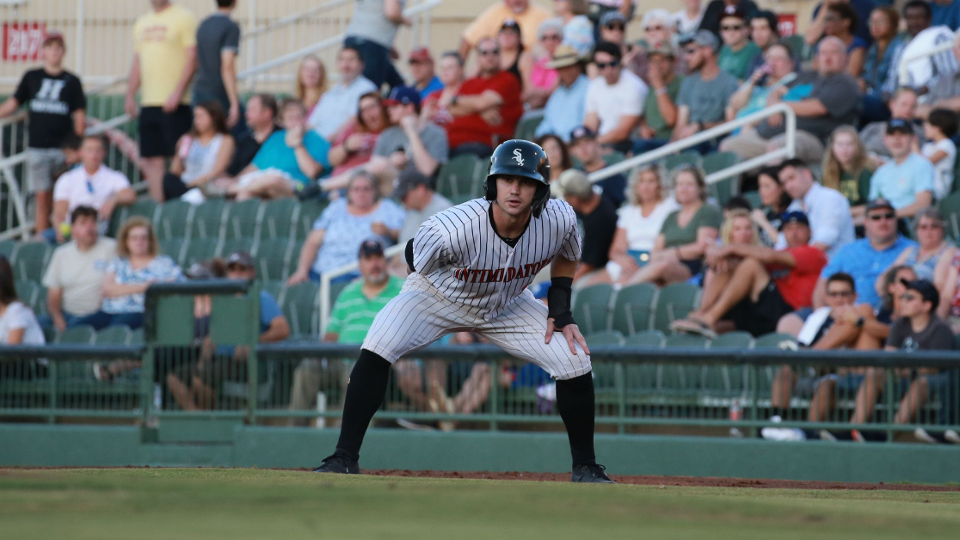 SALISBURY, MD - Using a three-hit day from Corey Zangari, including a two-run homer in the fourth, the Intimidators cruised by the Shorebirds Sunday night 5-2 at Perdue Stadium.

In the second, Tyler Osik kept his hot-hitting alive with a single to left field on a 2-2 pitch. After a strikeout from Romy Gonzalez, Zangari collected his first of three hits with a single up the middle to put two runners on for Cam Simmons. On the second pitch of his at-bat, Simmons collected an infield single to shortstop Ryne Ogren to load the bases for Kannapolis. Next up, Michael Hickman hit a ball deep enough to right field to score Osik and to give the Intimidators and Johan Dominguez an early 1-0 lead.

In the bottom half of the second, Dominguez got himself into a little bit of trouble after helping load the bases for the Shorebirds by issuing two free passes. After a single and a mound visit, Dominguez induced a groundball double play to Gonzalez at second, preserving Kannapolis' early advantage.

After a clean inning in the third for both arms, the Intimidators struck again in the fourth. Gonzalez led off the frame with a five-pitch walk, as Zangari then homered (15) to left field on a 1-0 pitch to push the lead to three for the Intimidators.

One inning later, Ian Dawkins walked to lead off the inning after five pitches with Delmarva's Dallas Litscher (L, 2-2). Two batters later, Alex Destino doubled (20) to right field on a 1-2 pitch, scoring Dawkins from first to increase the lead to four runs.

Dominguez worked around early trouble in the bottom of the fifth inning, as Alexis Torres doubled (13) to right field to lead off the inning. However, Dominguez received a flyout and groundout, and then struckout Adley Rutschman after a seven-pitch battle to keep Torres at second.

In the sixth, Dominguez (W, 6-5) punched out his sixth and final batter, allowing no runs on four hits and two walks. With his quality outing, Dominguez lowered his ERA to a 2.98.

Kannapolis tacked on another run in the top of the eighth as Destino reached on a seven-pitch walk to lead off. Two batters later, Gonzalez singled on a fly ball to center field to put runners at the corners for Zangari. Collecting his third RBI of the game, Zangari hit a ball deep enough to right field to score Destino and extend Kannapolis' lead, 5-0.

In the bottom half of the same inning, Rutschman hit a two-run homer (2) to right-center field off Kannapolis' Caleb Freeman to cut the lead to three, 5-2.

In the bottom of the ninth, still up by three runs, Austin Conway (S, 13) recorded two strikeouts to give Kannapolis the four-game series lead in game three of the series.