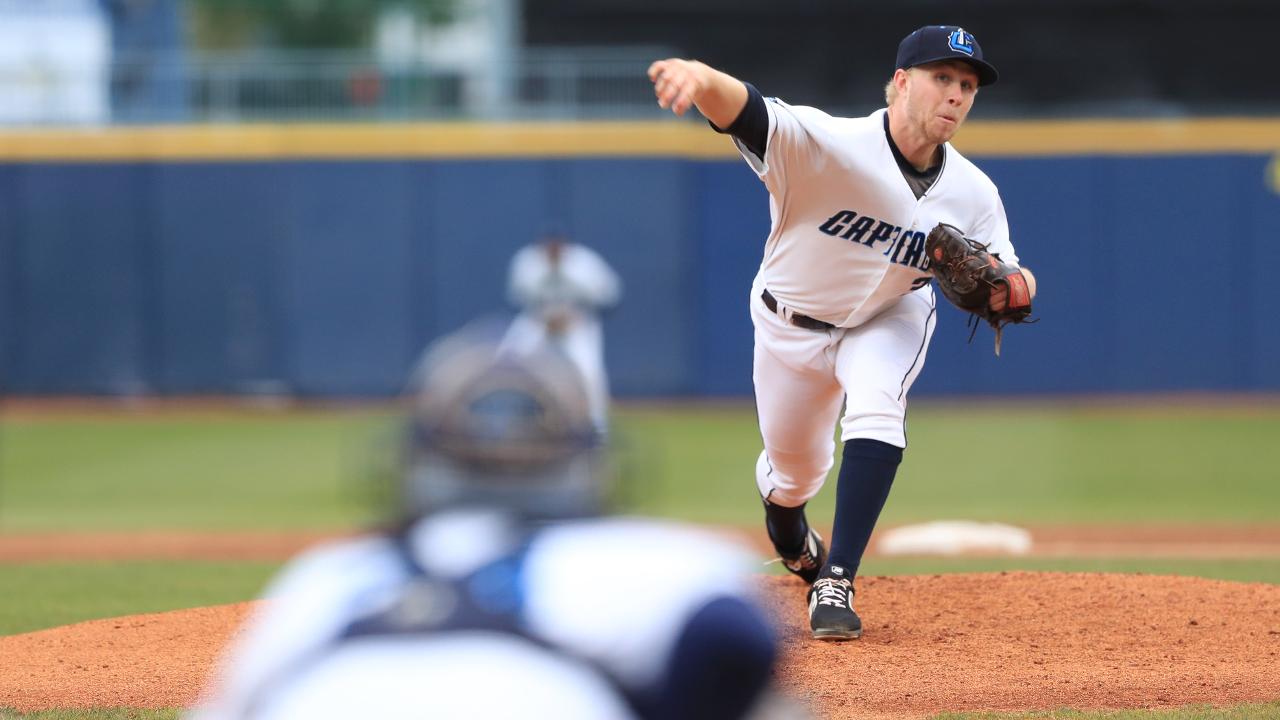 Shane McCarthy is slated to start game one of the playoffs for the Captains on Wednesday night. (Tim Phillis - TCP Photography)

(Eastlake, OH) - The Lake County Captains, Class-A Affiliate of the Cleveland Indians, will host the opening game of the Midwest League Playoffs on Wednesday night at Classic Park. The Captains will take on the Great Lakes Loons, Class-A Affiliate of the Los Angeles Dodgers, in the best-of-three Midwest League Quarterfinals. First pitch for Wednesday's postseason opener is scheduled for 7:00 p.m. Gates to Classic Park will open at 6:00 p.m.

The first 500 fans through the gates for game one will receive a free "Rock the Boat" playoff t-shirt, presented by the Captains' playoff sponsors: Patriot Car Wash, CPR Cell Phone Repair, The Red Roof Inn and Monreal Funerals & Cremations. The limited-edition t-shirt is navy blue and features the Captains' ship logo and the team's playoff rallying cry, "Rock the Boat," on the front, along with the sponsors' logos on the back.

Before the game, the Captains will be holding a special ceremonial first pitch by Matt Loede. A staple of Cleveland sports media for over 20 years, Loede has covered the Indians since the opening of Jacobs/Progressive Field in 1994. Loede is the founder and editor of NEO Sports Insider, covering all Cleveland sports, from the Indians, Cavs and Browns, to Ohio State and local high school athletics. He is also an integral part of Captains broadcasts, as the lead sports instructor at the Ohio Media School, the Captains' official broadcast partner. Loede was diagnosed with stage four non-Hodgkin lymphoma, a form of blood cancer, on April 29, and has been undergoing treatment. To date, Loede has received five rounds of chemotherapy and is due for a cell transplant this month.

The Captains clinched their sixth playoff berth in team history by winning the Eastern Division Wild Card in the first half of the 2019 season. Lake County was initially part of the South Atlantic League when the team played its inaugural season in 2003. The Captains made the South Atlantic League playoffs in 2003 and 2008 before joining the Midwest League in 2010. The Captains reached the Midwest League postseason in 2010, 2012, 2014 and now 2019. The team won its lone league championship in 2010, defeating the Clinton LumberKings at Classic Park in the fifth and deciding game of the best-of-five series.

About the MWL Playoffs

The Captains face the Great Lakes Loons in the Midwest League Quarterfinals. Lake County will host game one, while the Loons will host game two and game three (if necessary) at Dow Diamond in Midland, MI. The Captains and Loons split their 12-game season series, 6-6. The teams even finished the regular season with a series at Classic Park and split a pair of games (the series was scheduled for three games, but one was cancelled due to rain). During the season series, the Captains have posted a 3.67 team ERA against the Loons and hit a collective .230. The Captains are 5-2 at home against Great Lakes and 1-4 at Dow Diamond.

Lake County will start RHP Shane McCarthy in game one of the playoffs. McCarthy, whom the Indians drafted in the 18th round last year out of Seton Hall University, has made 11 starts with the Captains this season, posting a 4-3 record with a 4.14 ERA. Since returning from the Injured List, the right-hander has made two starts, striking out 15 men and walking just one over 7.1 innings pitched.

The Loons will counter with RHP Ryan Pepiot. In nine starts with Great Lakes this season, Pepiot has no decisions and a 2.45 ERA. The Dodgers drafted Pepiot in the third round this year out of Butler University.

Captains playoff tickets are available for purchase online at www.captainsbaseball.com, by phone at 440-954- (9467) and by visiting the Classic Park Box Office. Tickets cost $10 in advance and $12 on the day of the game.