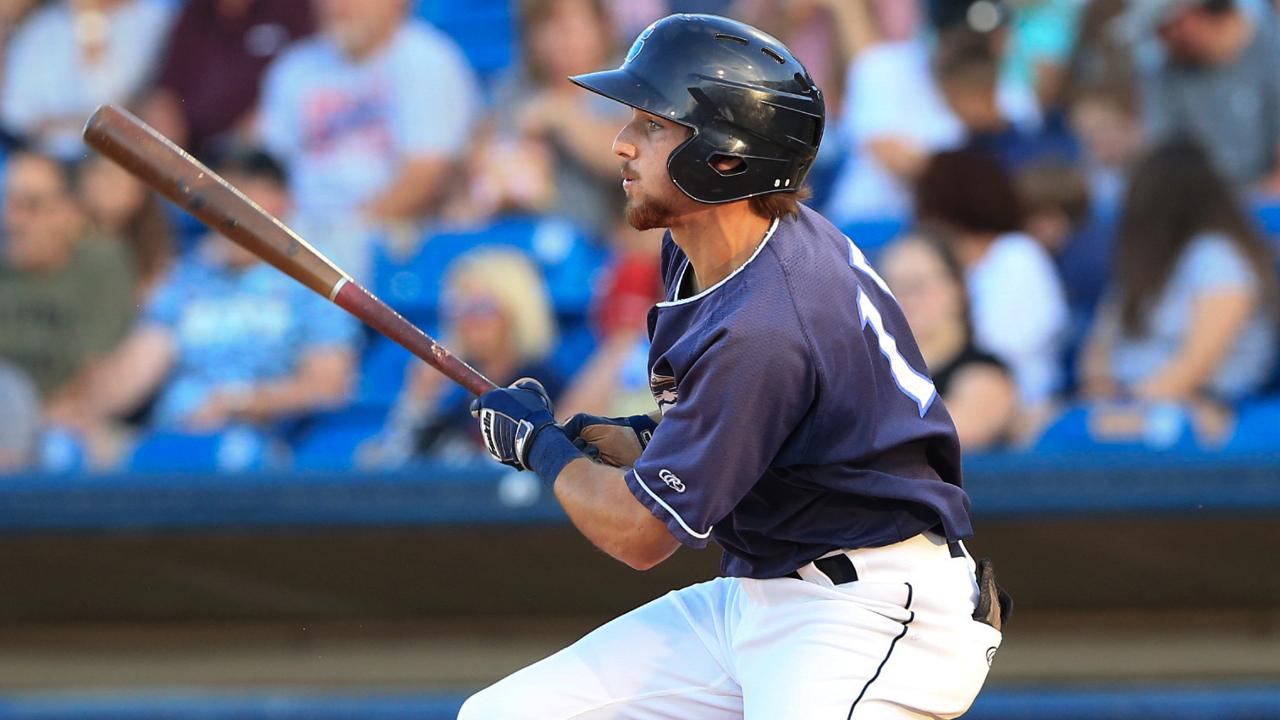 Daniel Schneemann hit a two-run single in the ninth to break a scoreless tie and help the Captains push the Midwest League Quarterfinals to a third and final game. (Tim Phillis - TCP Photography)

(Midland, MI) - The Lake County Captains needed a win to extend their season on Thursday night and got a clutch rally in the ninth inning to beat the Great Lakes Loons in game two of the Midwest League Quarterfinals. The Captains broke a scoreless tie with a four-run ninth, en route to a 4-0 win over the Loons at Dow Diamond. With the victory, Lake County has forced a decisive third game in the best-of-three series.

Both Lake County and Great Lakes threatened for the first time in the fourth and both teams came up empty with bases-loaded opportunities. In the top of the fourth, Jose Fermin led off with a double, but was caught taking a wide turn around second and tagged out in a rundown. With two outs, Loons starter Robinson Ortiz walked three straight men to fill the bases, but reliever Edward Cuello came in from the bullpen and struck out Quentin Holmes to end the inning.

Great Lakes loaded the bases with nobody out in the bottom of the fourth. Romer Cuadrado singled to begin the inning and Captains starter Ethan Hankins followed with back-to-back walks to Leonel Valera and Dan Robinson. Hankins then struck out Luke Heyer looking for the starter's eighth strikeout and the first out of the inning. Kyle Marman then came out of the bullpen, struck out Gersel Pitre swinging and got Sam McWilliams to fly out to centerfield.

The Captains' defense came up with a big play in the seventh inning to keep the game scoreless. Pitre singled with one out off of reliever Jake Miednik . Two batters later, James Outman roped a two-out double down the right field line. Clark Scolamiero dug the ball out of the corner, fired to Fermin and the second baseman relayed the throw home, as Pitre tore around third. Catcher Bo Naylor tagged out Pitre to end the inning.

Lake County finally broke the scoreless deadlock in the ninth. Loons lefty reliever Jeff Belge walked Bryan Lavastida to start the inning. Raynel Delgado struck out while attempting to bunt Lavastida to second, but Scolamiero worked a walk and so did Holmes to load the bases with one out. Right-hander Yeison Cespedes came out of the Loons' bullpen to faces the bases-loaded jam and Daniel Schneemann gave the Captains the clutch hit they needed. Schneemann pulled a grounder under the diving glove of first baseman Justin Yurchak, scoring both Lavastida and Scolamiero to give the Captains the lead. Jonathan Engelmann extended the lead to 3-0 with an RBI ground out to third that plated Holmes and a throwing error by third baseman Heyer, on a grounder by Fermin, allowed Schneemann to score and make it 4-0.

Jake Miednik closed out the win in the ninth with a one-two-three inning, capped by a diving stop by Fermin at second to end the game. Miednik (1-0) earned the win after spinning three scoreless innings. The lefty struck out four, walked one and allowed two hits.

Belge (0-1) took the loss for the Loons. The Great Lakes southpaw pitched 1.1 innings and allowed three runs on three walks with three strikeouts and no hits.

The Captains and Loons play the final game of the best-of-three Midwest League Quarterfinals on Friday night at Dow Diamond. The winner will go on to face the South Bend Cubs in the best-of-three Midwest League Semifinals on Saturday. If the Captains win, they will travel to South Bend, IN for game one and return home to Classic Park for game two on Saturday and game three on Sunday (if necessary). If Lake County loses, the Loons advance and the Captains' season comes to a close. First pitch for the decisive third game against Great Lakes is scheduled for 7:05 p.m.