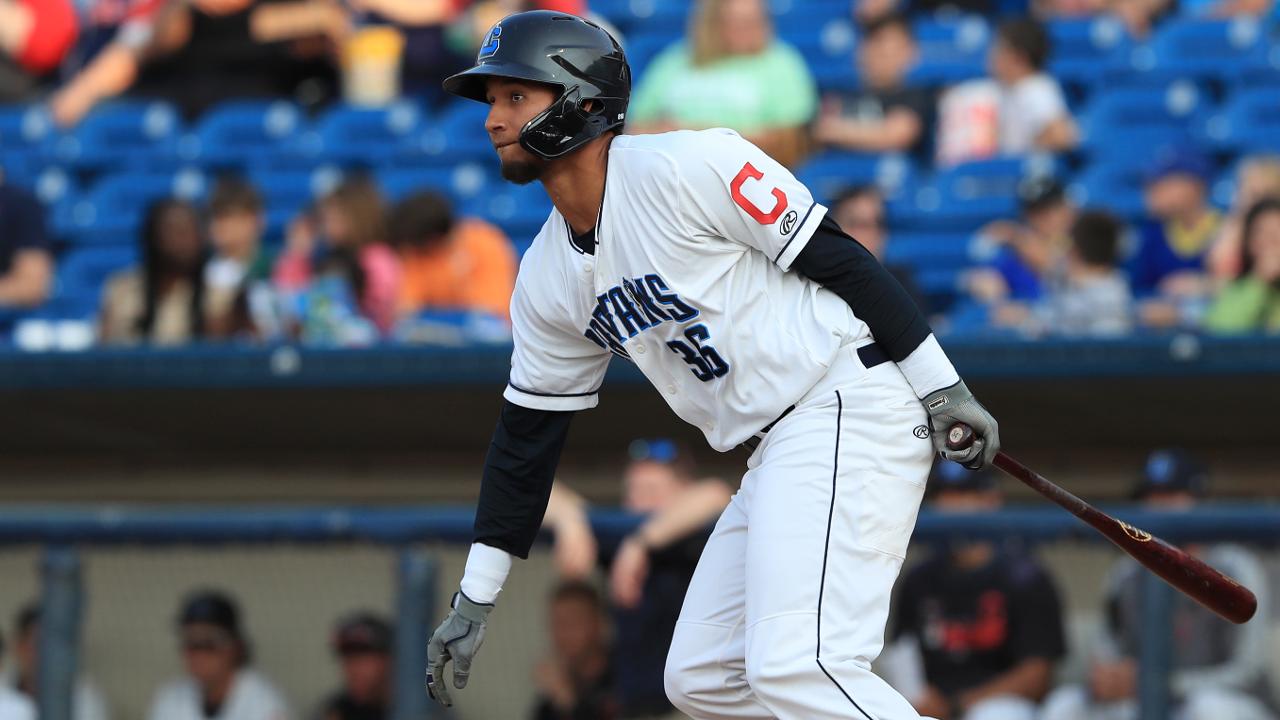 Miguel Jerez's RBI single in the eighth gave the Captains the lead for good in their come-from-behind win on Sunday. (Tim Phillis - TCP Photography)

(Burlington, IA) - For the second day in a row, the Lake County Captains (14-9, 54-38) erased a 2-0 deficit to defeat the Burlington Bees (9-14, 48-45) at Community Field. A four-run eighth inning propelled the Captains to a 5-2 victory on Sunday afternoon, pushing Lake County's winning streak to three games and notching a series win.

The Bees scratched across the game's first run in the third. Francisco Del Valle singled and Captains starter Alex Royalty issued a walk to Harrison Wenson, the right-hander's fifth walk of the ballgame, to put men on first and second with nobody out. Royalty got Keinner Pina to bounce into a double play, but Justin Jones came up next and attacked a 3-0 pitch, pulling it into left for a double that plated Wenson. Jordyn Adams added insurance the next inning with a two-out solo homer down the left field line.

Despite the walks, Royalty battled through four innings and held the Bees to just two runs and the bullpen took over from there. Brendan Meyer blanked the Bees in the bottom of the fifth before the Captains drove home their first run in the top of the sixth.

Bees starter Robinson Pina had held Lake County scoreless on just one hit over the first five innings, but the Captains solved the right-hander in the sixth. Ruben Cardenas singled with one out and Jose Fermin yanked a double down the left field line to score Cardenas from first and pull the Captains within one run at 2-1.

Meyer put up another zero in the sixth inning and Luis Araujo followed suit with a one-two-three seventh, setting the stage for the Captains' big eighth-inning rally.

Burlington reliever James Varela walked Connor Smith and Cardenas back-to-back to begin the frame and the Bees called on Mayky Perez to relieve the right-hander. Fermin dropped down a sacrifice bunt to move the runners to second and third and the Bees pulled the infield in. Hosea Nelson came up next and hit a tall pop up into shallow left. Left fielder Nonie Williams could not sprint in fast enough to make a play and the ball evaded the outstretched glove of shortstop Justin Jones. Smith raced home on the dunk single to tie the game. Miguel Jerez then hit a chopper that bounded over third baseman Morgan McCullough and landed in left. Cardenas scored on the single to give the Captains the lead at 3-2. After Perez walked Josh Rolette , Cody Farhat drilled a double into the right-centerfield alley that scored two and gave the Captains a 5-2 advantage.

Araujo (2-3) closed out the game and earned the win. The right-hander worked three scoreless innings and limited Burlington to two hits. He struck out four and did not issue a walk. The Captains' bullpen combined to pitch five scoreless frames and has spun nine scoreless innings over the first two games of the Burlington series.

Varela (0-1) took the loss. The reliever pitched one inning and allowed two runs on one hit with two walks and one strikeout.

The Captains will wrap up their Western Division road trip on Monday with a chance to sweep Burlington and clinch a winning road trip. First pitch at Community Field is scheduled for 7:30 p.m. ET.