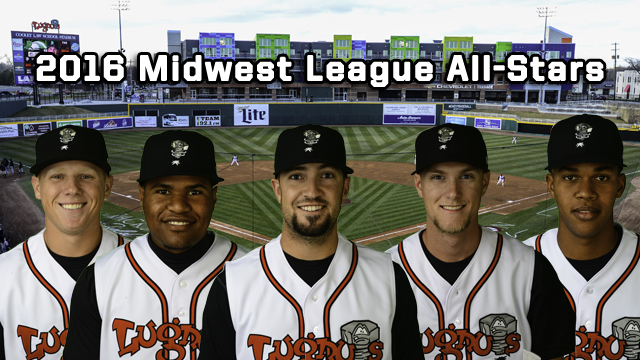 The deserving quintet was selected in a vote of the MWL's field managers. They will represent Lansing at the 52nd MWL All-Star Classic on Tuesday, June 21, at the home of the Cedar Rapids Kernels, Perfect Game Field at Veterans Memorial Stadium.

Juan Kelly, 21, was named the Eastern Division starter at first base. A native of Santo Domingo, Dominican Republic, the switch-hitter is tied for second in the Midwest League with 18 doubles in addition to ranking second in the circuit with 25 extra-base hits.

Andrew Guillotte, 23, was selected as a reserve outfielder for the East. In his first season in the Midwest League, the native of Lake Charles (LA) leads the Lugnuts in games, at-bats and base hits and is tied for first on the team in runs scored.

Jon Harris, 22, was the 29th overall pick in the 2015 draft, the Toronto Blue Jays' top selection. After allowing three runs in his first inning of the season, the Florissant (MO) native allowed just one unearned run in his 34 1/3 innings, including 28 consecutive scoreless innings.

Dusty Isaacs, 24, is the Midwest League's top closer, ranking atop the league with 11 saves and 18 games finished. A native of Lebanon (OH), the former Georgia Tech Yellow Jacket has a 1.07 ERA, allowing only three earned runs in 25 1/3 innings.

Angel Perdomo, 22, leads all of Minor League Baseball with a .132 opposition batting average, allowing only 22 hits in 49 1/3 innings. In his first year in the Midwest League, the native of San Cristobal (DR) has a 2-1 record with a sparkling 1.28 ERA in 11 games, nine starts.

Lansing opens a six-game road trip with the first of a three-game series at Lake County at 7:00 tonight. The Lugnuts' next home date is a doubleheader against the Great Lakes Loons on Monday, June 13th. For more information, call (517) 485-4500 or visit lansinglugnuts.com.