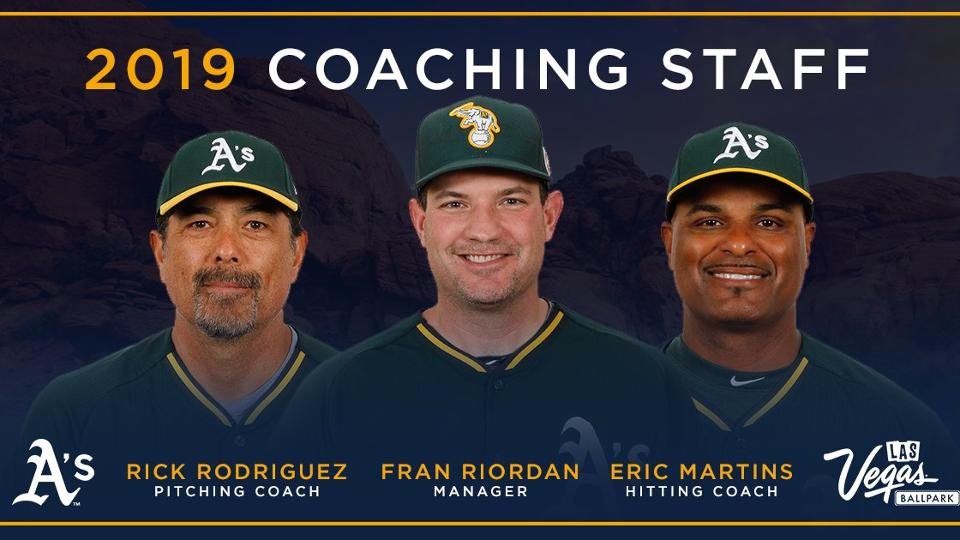 The Las Vegas coaching staff was also announced as Rick Rodriguez was named pitching coach; Eric Martins named hitting coach and Craig Conklin named coach (previously worked as a scout in the A's organization). The athletic trainer position is Brad LaRosa and Henry Torres is strength & conditioning coach. The entire field staff were together at Triple-A Nashville in 2018. In 2019, the A's will add a fourth coach to all affiliates.

Riordan (pronounced REAR-den), 43, has compiled 18 seasons overall in professional baseball and has been a member of the Oakland Athletics organization for the past four seasons (2015-18).

He has compiled an overall managerial record over 18 seasons of 941-925 (.504). In 2018, he made his Triple-A debut as manager with the Nashville Sounds and compiled an overall record of 72-68 (.514) and finished in second place in the American Southern Division to the PCL and Triple-A National Champion, the Memphis Redbirds. Nashville compiled a PCL-best 15-game winning streak from July 29 - August 14.

In 2017, he compiled a record of 67-71 (.486) with Double-A Midland and his squad captured the Texas League Championship. The prior two seasons, he was the skipper of Single-A Beloit of the Midwest League.

Before joining the Oakland organization, Riordan spent four seasons as manager of the Florence Freedom of the Frontier League (2011-14). He led the team to two playoff berths and is the all-time Frontier League leader in wins with 625. He was a 2014 Frontier League Hall of Fame inductee. Prior to his time with Florence, he managed the Northern League's Lake County Fielders (2010) and Kalamazoo Kings for six seasons (2004-09), leading the Kings to the 2005 Frontier League title. He also served as player-manager in the Frontier League from 2000-02, leading the Richmond Roosters to back-to-back-league championships in 2001 and 2002.

"The Athletics organization is very happy to be in Las Vegas," New Manager Fran Riordan said. "Las Vegas is a great place to have a Triple-A franchise and the proximity to Oakland provides a great situation for us. Personally, it will be tremendous for our team to open the Las Vegas Ballpark and with all the excitement that it will bring playing in the new stadium.

"The last three or four years, the A's organization have done a great job developing home grown talent to go along with some trades bringing some good prospects into the system. We will have exciting players in Triple-A Las Vegas and our fans are going to have the opportunity to watch a very exciting product on the field."

The Virginia Beach native played seven seasons of professional baseball as a first baseman/outfielder (1997-2003) after playing college baseball at Allegheny College in Pennsylvania.

Rick Rodriguez has enjoyed a long-time professional baseball career and will enter his 35th year in the Oakland Athletics organization (in 2019), including seven seasons as a player and 26 as a minor league coach. In 2019, he will also enter his fourth straight season as pitching coach for the A's Triple-A affiliate (Nashville, 2016-18). He served in the same role with the Advanced-Single-A Stockton Ports of the California League in 2015.

His playing career concluded in 1991 when he made three appearance for Triple-A Phoenix in the Giants organization.

An East Bay, California native, Rodriguez was born in Oakland and graduated from Castro Valley High School in 1978. He attended Chabot Junior College in Hayward and the University of California, Riverside and was named to the Castro Valley Sports Hall of Fame in 2011.

Eric Martins will enter his fourth season as the hitting coach for the A's Triple-A affiliate (Nashville, 2016-18). He previously served in the same role for Double-A Midland of the Texas League in 2015. From 2007-14, he served as an A's scout and was responsible for signing A.J. Griffin, Daniel Robertson and 2014 first-round selection Matt Chapman, among others.

The East Los Angeles, California native was selected by Oakland in the 17th round of the June 1994 First-Year Player Draft out of Long Beach State University. He played professionally for 11 seasons, including parts of four seasons with the A's Triple-A affiliates. He was a part of the 1997 Edmonton team that captured the Pacific Coast League Championship and the 1999 Vancouver team that won the Triple-A World Series in Las Vegas.

Martins has run the A's Scoutball Team for the past eight fall seasons and has also served on the staff of the Southern California Area Code Game team.

He is a certified member of the National Athletic Trainers' Association (NATA) and the Illinois Athletics Trainers Association. He is licensed in Illinois and Missouri. LaRosa obtained his bachelor's and masters degrees in kinesiology at Southern Illinois University at Edwardsville.

Henry Torres will enter his sixth season in the Oakland Athletics organization as a minor league strength and conditioning coach. He also enters his third season on the staff on the Triple-A level (Nashville, 2017-18). He spent the 2016 season in the same capacity with the Double-A Midland of the Texas League; 2015 with Advanced-Single-A Stockton of the California League and 2014 with Short-season Vermont of the New York-Penn League.

Prior to joining the A's, Torres began his professional career in 2013 as the strength and conditioning coach with the Short-season Idaho Falls Chukars in the Kansas City Royals organization.

A native of San Antonio, Torres earned his bachelor's degree in kinesiology from the University of Texas-San Antonio and is a certified member of the National Strength Coaches Association (NSCA) with the title of Registered Strength and Conditioning Coach (RSCC).

Las Vegas will open their 37th season in the Silver State on Thursday, April 4 against the El Paso Chihuahuas, Triple-A affiliate of the San Diego Padres, at Southwest University Park in El Paso, Texas.

Las Vegas will open the new Las Vegas Ballpark (10,000) on Tuesday, April 9 against the Sacramento River Cats, Triple-A affiliate of the San Francisco Giants, at 7:05 p.m.