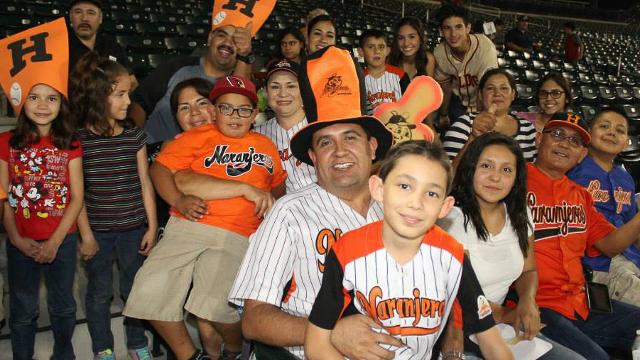 Spring training is coming to Las Vegas Ballpark this weekend - and it's coming in the form of the Mexican Baseball Fiesta, right as summer gives way to fall.

Confused? Here's the explanation: Since 2011, the Mexican Winter Leagues - which feature 10 professional teams that compete from October through February - has been playing several "spring" training games in the United States, mostly in Phoenix and Tucson, Arizona. These exhibition contests have come to be known as the Mexican Baseball Fiesta, and as the name suggests, it's one huge, colorful party in which fans partake in authentic Hispanic food and frosty libations while enjoying nonstop music, playful mascots and quality baseball.

Two years ago, the Mexican Baseball Fiesta traveled north to Las Vegas for the first time, playing games at Cashman Field. Now it's returning to town, with Las Vegas Ballpark serving as host for a pair of games between two of the top teams in Liga Mexicana del Pacifico (the Mexican Pacific League). Those teams - Los Naranjeros de Hermosillo and Águilas de Mexicali - will square off Friday and Saturday, with both games starting at 7:05 p.m.

"This is truly a party - I really don't know what else to call it," said Mike Feder, president of the Mexican Baseball Fiesta who spent 30 years as minor-league general manager. "It's a lot of music, a lot of drinking, mascots on the field and great baseball. It's just great entertainment."

In fact, Castilla - who is as popular as any baseball player who has ever come out of Mexico - is Hermosillo's current manager.

"It's excellent baseball," Feder said. "The teams' rosters include some former big leaguers and some prospects trying to get to the big leagues, but the majority of players are from Mexico. The quality of play may be a notch [below Triple-A] - you don't have those top prospect pitchers who are throwing 95 to 99. But these are guys who have been around a little; they're more veteran players."

Liga Mexicana del Pacifico has long been extremely popular throughout Mexico, with natives developing a passion for their hometown teams and passing that passion on from one generation to the next. "It's no different than the Diamondbacks or the Dodgers or the Yankees," Feder said. "Teams that play in this league are thought of the exact same way, and it's taken very seriously."

Don Logan, the Aviators' president and COO, echoed that sentiment. "The Mexican Baseball League is as popular in Mexico as Major League Baseball is in the U.S., if not more so," Logan said.

Local fans who attend the Mexican Baseball Fiesta but who aren't familiar with the festive atmosphere that has long been a staple of professional baseball south of the border are in for a unique treat. For instance, unlike with baseball in the U.S., music is played throughout the entirety of the game, even while the ball is in play. Also, multiple mascots roam the field between innings, fans dance the night away in the stands and traditional Mexican food - rather than hot dogs and peanuts - is the cuisine of choice at concession stands.

"Constant excitement is the best way to describe the Mexican Baseball Fiesta," Logan says. "The energy, the fans, the music, the food and the fun make this a unique experience for all baseball fans. We encourage everyone to come out for the party."

Adds Feder: "This product will bring [a piece of] home back to Las Vegas residents who are from Mexico. Their grandmothers and grandfathers who grew up in Mexico, they know Hermosillo and they know Mexicali. If you have any ties to Mexico, you understand this event."