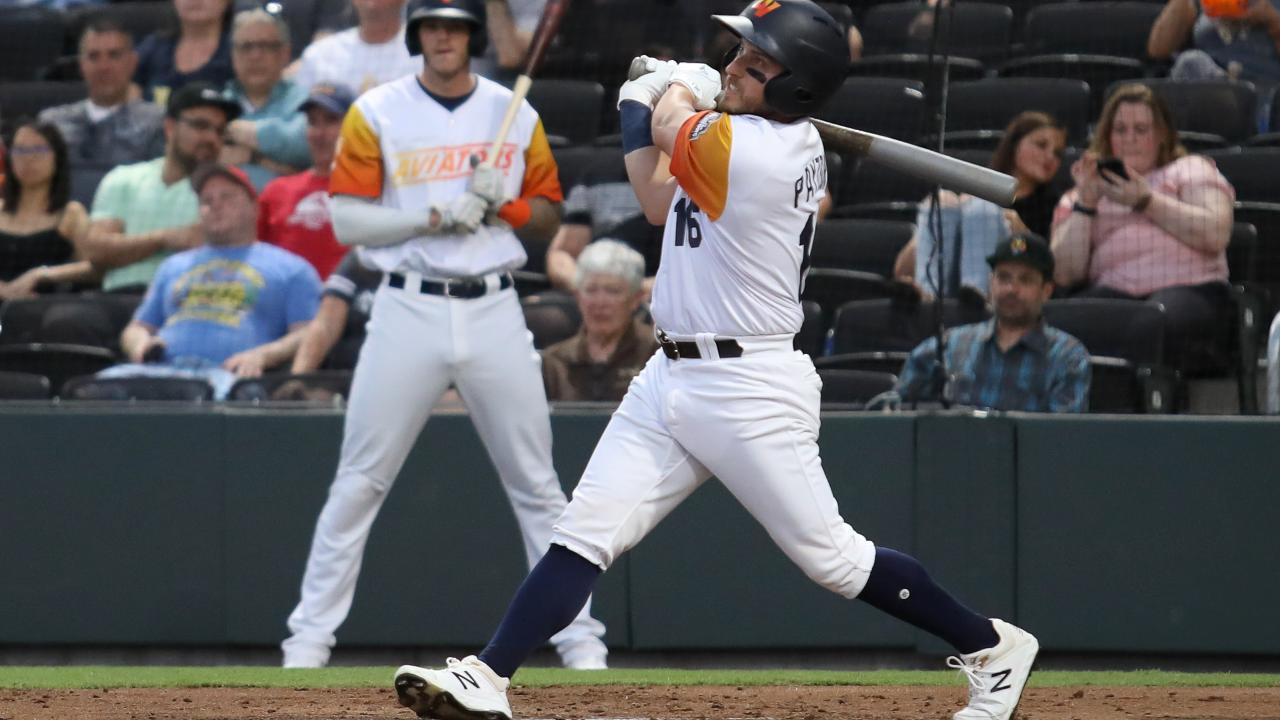 Aviators outfielder Mark Payton had two of his team's five hits in Saturday's 5-3 loss to the Sacramento River Cats. Payton is batting .500 (8-for-16) in the playoffs and has a 12-game hitting streak dating back to the regular season. (Darryl Ginwright darryl@ginwright.net)

It took the Aviators 139 games of a 140-game season to lock up the Pacific Coast League Pacific Southern Division title and the franchise's first postseason berth since 2014. If they're going to extend their season once again and secure the franchise's first playoff series win since 1988, they'll need to come away victorious in a winner-take-all showdown against the Sacramento River Cats on Sunday afternoon at Las Vegas Ballpark.

Las Vegas fell behind early in Game 4 on Saturday, struggled mightily against River Cats starting pitcher Carlos Navas and saw its late-inning rally fall short, as Sacramento escaped with a season-saving 5-3 victory before a crowd of 7,242 at Las Vegas Ballpark. With their victory, the River Cats avoided elimination and evened the best-of-5 Pacific Conference Championship Series at 2-2.

The two squads will return to the stadium for Sunday's 12:05 p.m. series finale with a crystal-clear picture of what's at stake: The winner will move on to next week's PCL Championship Series and face either the Round Rock Express or Iowa Cubs, while the loser will pack up the equipment bag for the final time in 2019 and head home.

Making the challenge all the more daunting for the Aviators? They're handing the ball to a starting pitcher (James Kaprielian) who will be making just his second career Triple-A start. Also, they might not have the services of Jorge Mateo, their leadoff hitter/shortstop/All-Star/season-long catalyst who was forced to leave Saturday's game after being hit by a pitch on his right hand leading off the bottom of the first inning.

Las Vegas manager Fran Riordan said after the game that Mateo injured the top part of his fingers, but he hadn't received X-ray results. Thus, Riordan is unsure of his shortstop's status for Game 5.

If Mateo is unable to play, the Aviators' infield will look just as it did for the final eight innings Saturday: two players (Trace Loehr and Alfonso Rivas) who spent the majority of this season at Class-A Stockton (California), and another (Mikey White) who was at Double-A Midland (Texas) until being called up in the final week of the regular season.

The bright spot? All three of those players have come up big at various points since joining the Aviators, including Loehr, who replaced Mateo on Saturday and made several solid defensive plays and also scored his team's first run.

"He's been our catalyst all year, and our offense kind of goes as he goes," Riordan said of Mateo. "So to lose him after his first at-bat hurt. I don't know if he's going to play tomorrow, but like we've been saying the entire season, it's the next man up. We're going to have to go with what we have, and I have full confidence that these guys can get it done."

That they nearly got it done in dramatic fashion in Game 4 was somewhat remarkable, considering how Sacramento dominated early on, both on the mound and at the plate. Navas, who was 0-5 with a 5.08 ERA in 15 appearances (five starts) with Sacramento in the regular season, pitched like an ace, holding the Aviators without a hit for the first 4 2/3 innings.

The right-hander from Venezuela ended up allowing just that one hit - a double off the center-field wall by Skye Bolt - over five innings, walking two and striking out three in an extremely efficient 77-pitch outing.

"Navas threw a really good ballgame tonight," said Riordan, who actually managed the former Oakland A's prospect in 2017 when both were at Midland. "He kept us off the barrel of the bat, he pitched inside well, he mixed up his arsenal and we just couldn't do anything against him."

While Navas (1-0) was carving up the Aviators, his offense backed him with a 3-0 lead, scoring once in the first on Cristhian Adames' RBI groundout and twice in the fifth when Zach Houchins led off with the first of his team's three home runs (a solo shot) and Abiatal Avelino followed two batters later with an RBI single that scored Ryan Howard, who doubled after Houchins' homer.

All of that damage came against Las Vegas starting pitcher Grant Holmes, who was making his second career Triple-A start after himself being called up from Midland a week earlier. Despite yielding the three runs, the hard-throwing right-hander didn't pitch poorly, as he scattered five hits, didn't issue a walk and struck out five in 4 1/3 innings. In fact, after giving up hits to the first two River Cats he faced, Holmes (0-1) retired 11 of the next 13 batters before surrendering Houchins' homer.

After Avelino's single put Sacramento ahead 3-0, Kyle Lobstein replaced Holmes and got out of the fifth on a double play. However, added to its lead in the sixth when Adames led off by hitting Lobstein's 0-2 pitch over the left-center field wall.

Just when it looked like the River Cats might be on their way to a blowout win, the Aviators' offense finally sprung to life. Not surprisingly, outfielder Mark Payton - who is now riding a 12-game hitting streak dating back to the regular season - delivered the big hit, a one-out RBI single that scored Loehr from second to cut Sacramento's lead to 4-1.

That score held until the bottom of the eighth, when the Aviators strung together three consecutive hits against flame-throwing River Cats reliever Melvin Adon. The big blow came from Dustin Garneau, whose double off the base of the wall in left field scored Eric Campbell from second and sent Payton to third. Rivas then followed with a groundout that scored Payton, and suddenly Las Vegas had the tying run just 90 feet away.

Alas, that would be as close as the Aviators would get. After Jonah Heim grounded out to end the eighth, Peter Maris gave the River Cats an insurance run with a two-out homer in the top of the ninth. Then Sacramento right-hander Enderson Franco came on and retired the side in order to close out the game, even the series and force Sunday's deciding fifth game.

"We put ourselves in position to tie the game or even take the lead in the bottom of the eighth," Riordan said of his team's late rally. "We kept fighting, and that's what we do - that's been our calling card all season."

And the reigning PCL Manager of the Year doesn't expect that to change come Sunday - no matter what names he pencils in on his lineup card.

"I expect the same thing we've gotten for 144 games to this point," Riordan said. "We're going to put this game behind us, and the guys are going to shower, get something to eat, go home, get a good night's sleep and wake up ready to go."

GAME NOTES: Bolt (1-for-3), Campbell (1-for-3, run), Garneau (1-for-4, RBI) and Payton (2-for-3, run, RBI) were the only Aviators to record hits Saturday. … Payton raised his batting average in the series to .500 (8-for-16). Also, during his 12-game hitting streak, he's batting .469 (23-for-49) with two home runs, five doubles and nine RBI. He has multiple hits in 10 of those 12 contests, including three of four playoff games. … Avelino (2-for-5), Mike Gerber (2-for-4) and Houchins (2-for-4) accounted for six of the River Cats' 10 hits. … Maris entered the game in the bottom of the sixth inning after Levi Michael was ejected after taking a called third strike to end the top of the inning. … Iowa and Round Rock also will play a deciding Game 5 in the PCL American Conference Championship Series on Sunday after the Cubs staved off elimination by pulling out a 5-4 home victory in 11 innings Saturday. All four games in the series have been decided by one run, with three of those contests going extra innings.

ON DECK: Kaprielian is scheduled to oppose Sacramento left-hander Caleb Baragar in Sunday's series finale. Like Kaprielian, Baragar has only made one career Triple-A start, and it came back on May 2 at Albuquerque, where he gave up five runs on six hits in 4 1/3 innings, although the River Cats prevailed 13-5.

Conversely, Kaprielian's first Triple-A start a week ago Sunday was much more successful. The right-hander held Tacoma to one run on six hits with no walks and six strikeouts in four innings, as the Aviators went on to an 8-1, playoff-clinching victory at home. Kaprielian, who started the season at Stockton before being promoted to Midland, threw 52 of 73 pitches for strikes.

"It's only going to be the second time I've seen him pitch, but he sure made a good impression in his first outing," Riordan said of his Game 5 starter. "He attacks the strike zone, he's got good stuff and we're going to need his best tomorrow. He's a guy who has pitched in a lot of big games in his career, he's got a big pedigree behind him, and we're going to expect great things."