Tacoma Rallies for 4-2 Victory Over Aviators 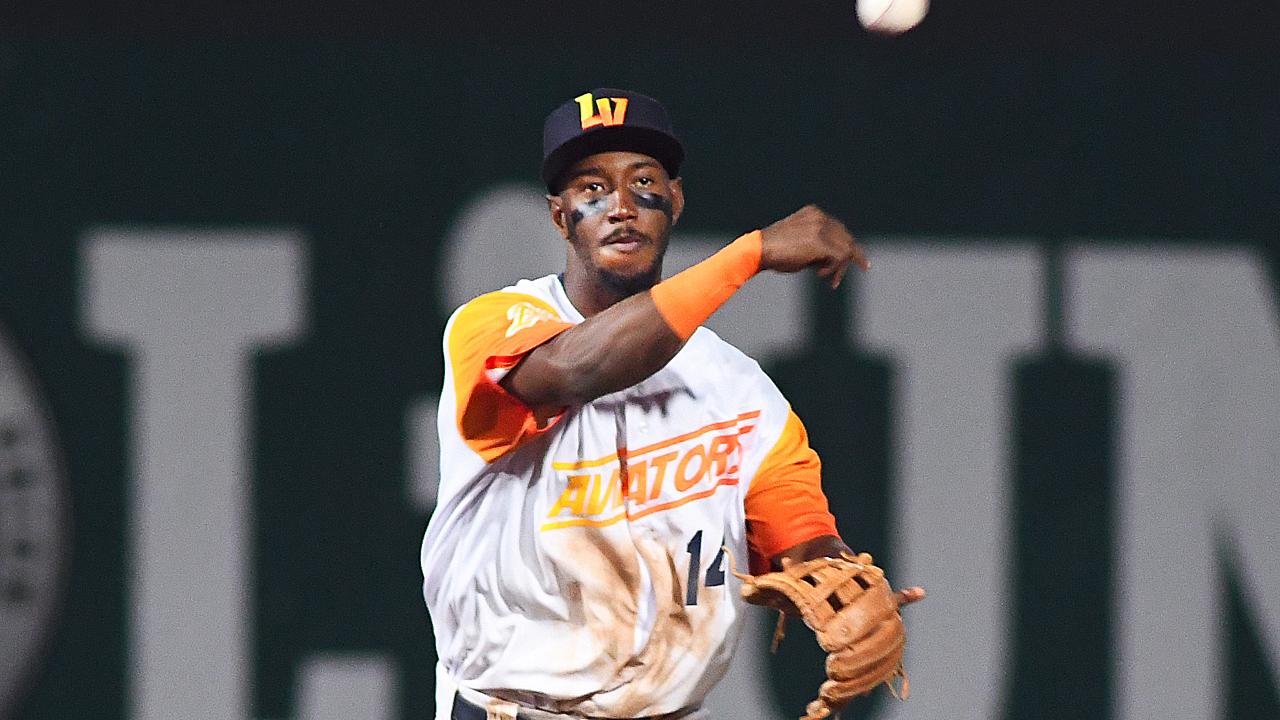 Roster upheaval is as much a part of Triple-A baseball as strikeouts, home runs and cheap hot dogs, especially late in the season when the needs of the major-league club fighting for a postseason berth supersede those of their top affiliate. Still, no Triple-A team - particularly one in the midst of its own playoff race - expects to lose three players in the span of three days who combined for 382 hits, 72 home runs and 248 RBI over the season's first 130-plus games.

Yet that's what happened to the Aviators this week when the Oakland A's promoted infielders Seth Brown (.298 batting average, 37 homers, 104 RBI) and Sheldon Neuse (.317, 27 HRs, 102 RBI) to the big leagues. And to make room on the 40-man roster for Brown, Nick Martini (.328, eight HRs, 42 RBI) was designated for assignment and subsequently claimed off waivers by the San Diego Padres.

Needless to say, it's not easy to replace that much offensive production, as Las Vegas is quickly finding out.

Despite rapping out 10 hits in Friday's opener of a season-ending four-game homestand, the Aviators only managed to cross home plate twice in a 4-2 loss the Tacoma Rainiers before a sellout crowd of 10,153 at Las Vegas Ballpark. Las Vegas (81-56) has now followed a season-best nine-game winning streak by losing four of its last five, scoring a total of just six runs in its last three contests.

The silver lining? The El Paso Chihuahuas, who are chasing the Aviators in a battle for the Pacific Coast League's Pacific Southern Division championship, also lost Friday, falling 2-1 in 10 innings at Sacramento. As a result, Las Vegas still has a two-game division lead with three games remaining. That means any combination of Aviators victories over Tacoma or Chihuahuas losses in Sacramento that adds up to two, and Las Vegas will claim the division crown.

That actually could happen as soon as Saturday night, but only if El Paso loses again and the Aviators string together the kind of run-producing hits that have defined their sensational inaugural season. Unfortunately, the latter didn't happen Friday, as Las Vegas stranded 10 baserunners and went 2-for-10 with runners in scoring position.

Tacoma (60-76) wasn't any better, leaving eight runners on base and going 2-for-11 in clutch situations - but both of those hits came in the decisive eighth inning. That's when the Rainiers sent nine men to the plate and scored three runs against three Aviators relief pitchers to erase a 2-1 Las Vegas lead.

Tacoma closer Matt Festa then made quick work of the Aviators in the eighth and ninth innings, retiring six of the seven hitters he faced to nail down his fifth save.

Beyond the fact that the defeat kept Las Vegas from inching closer to clinching a playoff spot, it spoiled a sensational start by Jesús Luzardo. Making his seventh start of the season for the Aviators, the 21-year-old southpaw turned in by far his most dominant outing, allowing just a first-inning run while scattering six hits (five singles and a double) over six innings.

Showing why he's the A's top prospect - and the No. 1 left-handed pitching prospect in all of baseball - Luzardo had a season-high 10 strikeouts, issued no walks and hit 99 mph on the radar gun multiple times while throwing a season-high 93 pitches (57 for strikes).

It was exactly the kind of starting pitching effort the Aviators will need if they are going to not only reach the playoffs but do damage once there - especially without Brown, Neuse and Martini.

GAME NOTES: Las Vegas left at least one runner on base in every inning but the second and ninth. ... The first six batters in the Aviators' lineup accounted for nine of the team's 10 hits, with Jorge Mateo (2-for-5), Mark Payton (2-for-5) and Franklin Barreto (2-for-4) finishing with multiple hits. For Payton, it was his fifth consecutive multi-hit game, during which the outfielder is 10-for-20. … Barreto (first-inning single) and Alfonso Rivas (sixth-inning double) drove in the Aviators' two runs. Rivera was called up earlier this week from Class-A Stockton (California) to replace Brown, and through the first five Triple-A games of his career, he's batting .421 (8-for-19). ... Tacoma leadoff hitter John Andreoli had four of his team's 10 hits. He singled in his first three at-bats, then doubled to jump-start the Rainiers' eighth-inning rally. The outfielder's bid for a perfect night ended when he struck out looking against Wendelken in the ninth. ... Friday's sellout was the 44th of the season at Las Vegas Ballpark. … Las Vegas infielder Eric Campbell, who has been sidelined with a left hamstring injury since August 18, is scheduled to test his leg during pregame baserunning drills Saturday. Assuming he doesn't suffer any setbacks, he's expected to be activated in time for Sunday's game.

AND THE WINNERS ARE …: The Aviators recognized several players with season-ending awards following Friday's game. Mateo won the Mayor's Trophy, as voted on by fans, while Brown was named the team's Most Valuable Player. Right-hander Paul Blackburn took home the Most Valuable Pitcher award, while Lobstein was honored with the Community Service Award.

Also on Friday, Baseball Digest announced that it has named the Aviators and Las Vegas Ballpark as its Team of the Year and Ballpark of the Year. It's the first time in the publication's history that a single franchise has won both honors in the same season.

TRANSACTION ACTION: In addition to Brown, Neuse and Martini, the Aviators this week also lost left-handed relief pitcher Wei-Chung Wang, who was designated for assignment Thursday. The move was made to clear a roster spot for Neuse, who made his first career big-league start Friday and went 0-for-3 with a walk in Oakland's 8-2 victory over the Yankees in New York.

In other roster news, the A's on Friday elevated right-handed pitchers Grant Holmes and James Kaprielian from Double-A Midland (Texas) to Las Vegas. Holmes was 6-5 with a 3.35 ERA in 22 starts for Midland, while Kaprielian was 2-1 with a 1.63 ERA in seven outings for the RockHounds. Kaprielian also pitched in 18 games for Stockton, where he was 2-2 with a 4.46 ERA.

Holmes is slated to make his first Aviators start Saturday, while Kaprielian is scheduled to take the mound Sunday.

ON DECK: Holmes will start opposite Tacoma left-hander Anthony Misiewicz (7-6, 5.62) as the Aviators and Rainiers continue their four-game series at Las Vegas Ballpark. First pitch is at 7:05 p.m., and the first 2,000 fans in attendance will receive a free Aviators jersey. There also will be multiple giveaways throughout the game as part of Fan Appreciation Night festivities.

Catch every Aviators game throughout the season on NBC Sports Radio 920-AM, and follow us on Twitter @AviatorsLV.