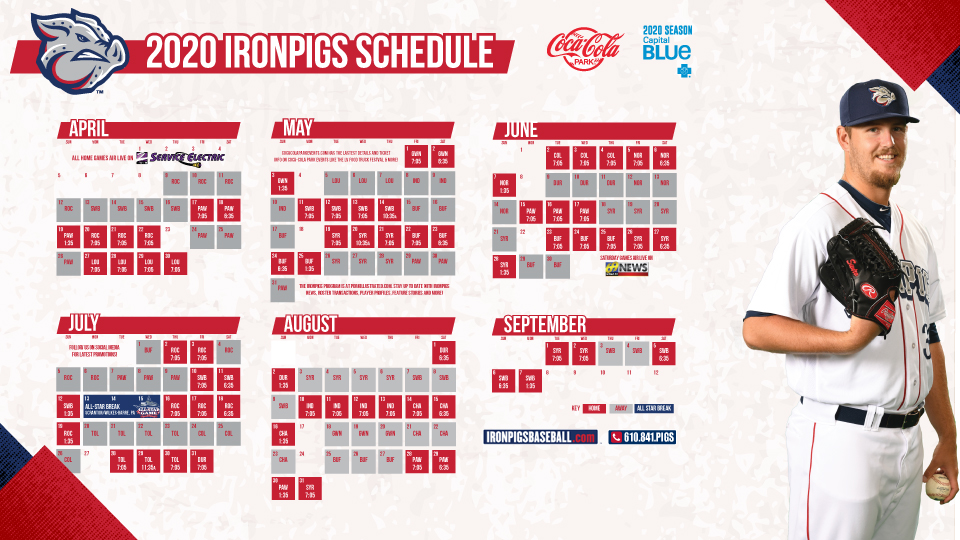 The Lehigh Valley IronPigs, in conjunction with the International League, have released their schedule for the 2020 season.

Opening Night for the IronPigs will be Friday, April 17 at 7:05 p.m. against the Pawtucket Red Sox. The opening homestand features seven games - four against Pawtucket and three against the Rochester Red Wings.

The RailRiders, the Triple-A affiliate of the New York Yankees, will make three trips to Coca-Cola Park in 2020. The Iron Rail Series at Coca-Cola Park will be May 11-14, July 10-12 and September 5-7. The IronPigs will also play nine road contests against their rivals from the north.

All game dates and times are subject to change.

In conjunction with today's schedule reveal, the Lehigh Valley IronPigs have announced the dates for their 10-game Bacon, USA, memberships. Fans who purchase 10-game Bacon, USA, memberships will be able to exchange just ONE GAME for another at any point during the season. Online orders for 10-game plans will begin on Monday, August 26. 10-game plans will go on sale to the general public at the ticket office and by phone next Tuesday, August 27.

For all ticket information, fans can visit call the IronPigs at 610-841-PIGS (7447), go online at PigsMemberships.com or visit the Provident Bank Ticket Office at Coca-Cola Park.