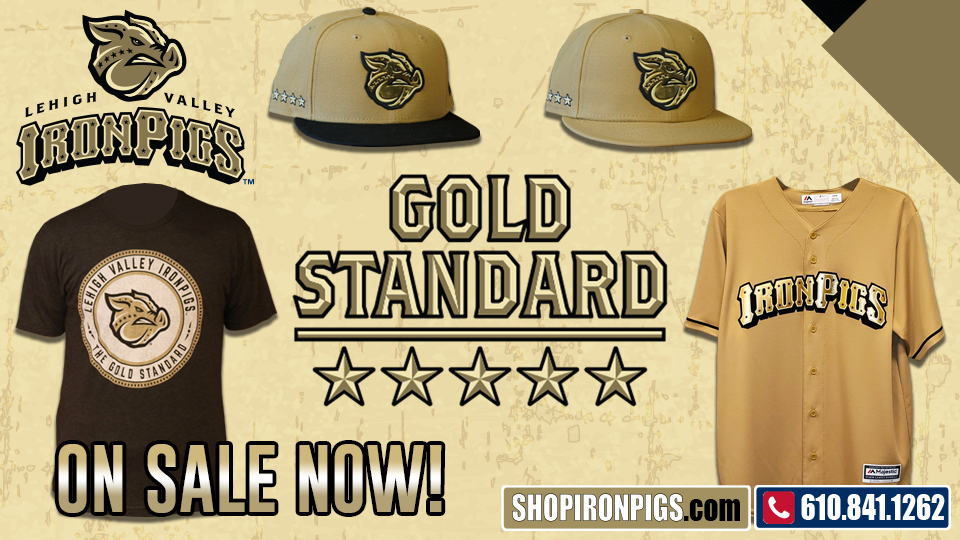 The Lehigh Valley IronPigs will honor the best fans in Minor League Baseball in a very special way this season. "Gold-Standard" jerseys and caps will be worn during Friday home games beginning on Opening Night, Friday, April 17, when the IronPigs play the Pawtucket Red Sox. These jerseys will be replacing the black "Molten" jerseys that had previously been worn on Friday nights. This will also be the first jersey unveiling since 2018, when the IronPigs introduced their maroon Sunday uniforms.

SHOP THE LOOK: Pick up your own Gold Standard gear now at ShopIronPigs.com

"These uniforms represent what we as an organization think of our fans - the 'Gold Standard' in Minor League Baseball," said IronPigs President and General Manager, Kurt Landes. "Our team will wear these uniforms every Friday home game knowing that they have the best fans in Minor League Baseball behind them. Symbolically, these Gold-Standard uniforms will be the epitome of what being an IronPigs fan is all about."

The "Gold Standard" initiative was brought to life when the IronPigs were awarded the Larry MacPhail Award in October. The annual award acknowledges the top marketing and promotional team in Minor League Baseball. In addition to winning the industry's most coveted award, the IronPigs have also won more Golden Bobbleheads (5) than any other team in baseball. Golden Bobblehead awards are given to the year's top promotions and events within Minor League Baseball. The "Gold Standard" uniforms are a direct tribute to IronPigs fans whose support has allowed for the organizations' numerous successes since the franchise's inception in 2008.

The uniforms will feature a gold base with "IronPigs" across the chest in metallic gold with black trim. A black stripe will be at the base of each sleeve with a "Gold-Standard" patch, featuring five gold stars, on the left sleeve. The five-stars represent the top rating of the IronPigs and their fans. The team will also be wearing all-gold caps with a gold liquid chrome IronPigs logo on the front with five stars located on the side.

These brand-new on-field "Gold-Standard" jerseys and caps, as well as other innovative merchandise, are now available at the Majestic Clubhouse Store at Coca-Cola Park and ShopIronPigs.com. Store hours are Monday-Saturday, 10 a.m. -6 p.m. and Sundays, 12-5 p.m.

The 2020 IronPigs season is the team's 13th as the top affiliate for the Philadelphia Phillies and 13th at Coca-Cola Park. Follow the IronPigs on Twitter at @IronPigs and like them on Facebook via www.facebook.com/LHVIronPigs.

The 2020 IronPigs season is presented by Capital BlueCross.