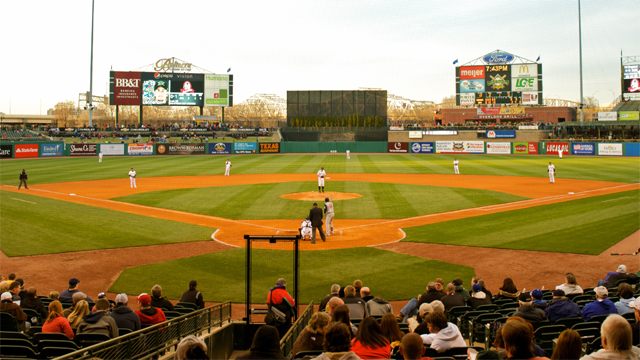 LOUISVILLE, Ky. - Tom Nielsen has wanted the playing surface at Louisville Slugger Field switched from Bluegrass to Bermuda grass since he became the head groundskeeper of the Louisville Bats 14 years ago.

However, he understood why others might have been hesitant to make the switch.

"It's the Bluegrass State and people want Bluegrass," Nielsen said. "I'm not from here and I didn't start growing grass here, but I assumed I could grow Bluegrass. I found out the problems with the (climate change) make it very difficult."

Thanks to a cool, wet fall in 2013, Nielsen finally got his wish. A disease known as Gray Leaf Spot inhabited and spread across the grass at Louisville Slugger Field and left the front office and grounds crew with no choice but to remove the Bluegrass and lay down the Bermuda grass.

"You never want the field to fail because that's what we're solely judged on -- what the field looks like," Nielsen said. "But it's kind of a blessing in disguise that it actually happened."

What some people may not realize is the work is far from over once the grass is laid. In fact, it's only just begun.

The scientific terminology and technicalities would confuse almost anyone shy of a botanist, so here's the gist of if: different types of grass grow in different ways and Bermuda grass grows best during the heat of the summer.

With that being said, Nielsen and the grounds crew were forced to develop a plan that would have the field ready and looking pristine by the Bats' home opener. It would be no problem for the two-time International League Sports Turf Manager of the Year (2003, 2009).

"We overseeded the Bermuda with Ryegrass," Nielsen explained. "In the early months, the Bermuda would be completely brown and the Ryegrass will give it the nice green color. We're playing throughout two different seasons - the cool season in the spring and the hot season in the summer - and the surface we have now should react well to it."

The problem is, thanks to a tumultuous winter climate that saw near record amounts of snowfall coupled with 60 degree weather, there hasn't been much of a spring thus far and the grounds crew hasn't had as many days as they would've liked to be able to work on the field.

"It's always stressful because we can do things to make our chances better, but Mother Nature has the full control over it," Nielsen said. "What you do a year in advance, in the spring or fall before, leads you into a better position now.

"The way I manage my field and my crew is we prepare for the worst and hope for the best."

Although Nielsen doesn't like to complain because he knows some people always have it worse, this winter was one of the worst he could have imagined.

Nevertheless, after working almost endless hours and with the help of a growth blanket that covered the field from mid-February to mid-March, he and his crew have the playing surface at Louisville Slugger Field in mid-season form.

"The only thing that would need to be done for a game to be played today would be to paint the lines on the field," Nielsen said. "With all of our preparation, we're excited. We're right on schedule and everything's good. You don't know what's going to come up, but we're right on target and I think everything's going to be great."