A new season brings new experiences at the ballpark 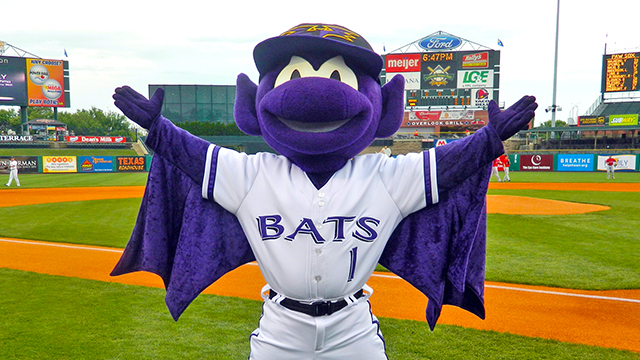 This season at Louisville Slugger Field the Bats will have a few new things for fans to enjoy. These range from kids eating for free to brand new theme nights. Without further ado, let's reveal what will be new in 2015.

At each Sunday home game all kids (12 & under) with paid admission receive a FREE ballpark meal that includes a hot dog, junior nachos, and a small soda. Combine this with Kids Inflatable FunZone and Kids Run the Bases for a great Sunday for the entire family. | Learn More

2. Promo of the Month Ticket

There will be a new ticket offer this season that combines a ticket with a guaranteed giveaway item. Each month the giveaway will change. In April, the giveaway will be a Fleece Blanket, May, a Reds Hat, June, a Bats Grill Set, July, Buddy Bat Bobblehead, and finally August, a Louisville Slugger Field Stadium Replica. | Learn More

At each Sunday home game this season the Bats will wear camouflage jerseys to benefit the Kentucky-Indiana Chapter of the Paralyzed Veterans of America. Koetter Construction will provide the jerseys, which will be auctioned following the conclusion of the season with 100 percent of the funds being donated to the local PVA chapter. So come out and see the Bats in camo on Sunday's this season and support a good cause! | Learn More

The Louisville Bats will introduce four new theme nights this year at the ballpark. College Night, Frozen Day, Superhero Night and Star Trek Night will each have their own designated game night this season.

College Night - Friday, April 10: College students can come out to the yard and enjoy a $3 discount on their admission ticket with a valid ID. The first 1,500 fans thru the gates will also receive a free koozie brought to you by the UofL College of Business.

Frozen Day - Sunday, April 19: Be sure to come to the ballpark for a chance to meet your favorite Frozen princesses. Meet and greet plus photo opportunites will be available for all fans in attendance.

Superhero Night - Saturday, May 23:  Dress up as your favorite superhero and come to the ballpark for our first-ever Superhero Night. The Bats players and coaching staff will be wearing themed Bats Batman jerseys. A special appearance will be made by Spider-Man and Captain America!

Star Trek Night - Saturday, August 1: Star Trek will have it's own night at the ballpark after Star Wars was introduced last season. Dress up as a Star Trek character for a chance to win prizes, on a night with sights and sounds themed just for Star Trek fans.

For a full list of promotions and additional theme nights be sure to check out our Full Promo Schedule.

Have you had a mini plan with us in the past? If you haven't, here is your chance to come out to the ballpark on six days for a very affordable price. Our brand new Six Pack Mini Plans offer six games in premium seats for only $60 a seat. Each pack includes free parking, unused ticket exchange dates and more! | Learn More