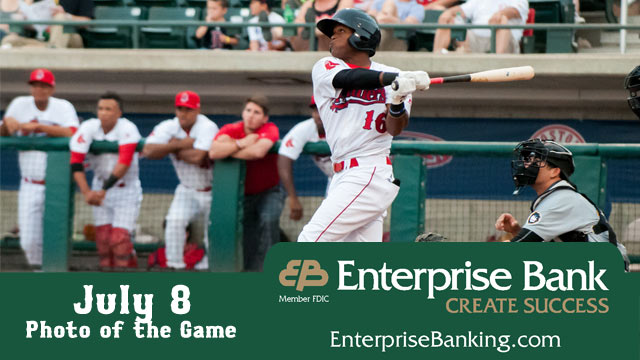 LOWELL, MASS. - Luis Alexander Basabe hit two home runs, one from each side of the plate, and Jake Cosart threw five hitless innings as the Spinners opened their first prolonged home stand of the season with a 4-1 win over the West Virginia Black Bears Wednesday night at LeLacheur Park.

Lowell (13-6) took the lead in the third inning when Basabe took a two-out, 2-0 offering 404 feet over the video board in left field to give the Spinners

After Cosart walked the bases loaded with two outs in the fifth, Basabe made a great leaping catch at the wall in right field to keep the no-hitter intact and preserve the Lowell lead.

The Spinners extended their lead in the fifth inning with Basabe again leading the way. A one-out walk by Jeremy Rivera and single by Jordon Austin chased West Virginia's Hector Garcia and Basabe greeted Edgar Santana with a three-run home run to extend the Lowell lead to 4-0.

Cosart was lifted after 84 pitches through five innings without allowing a hit and West Virginia promptly broke up the no-hitter with back-to-back singles against Ben Taylor to lead off the sixth. A two-out wild pitch would plate the Black Bears first run but it would be their last as the score held as a 4-1 final.

Basabe, who became the first player in Lowell franchise history to hit home runs from both sides of the plate June 30 at Vermont, did it for a second time in two weeks. He finished the night 2-for-4 with all four runs driven in.

The Spinners and Black Bears will meet again Thursday night for Military Appreciation Night presented by US Family Health Plan. Jose Almonte (2-0, 1.53) gets the ball for a 7:05 first pitch.