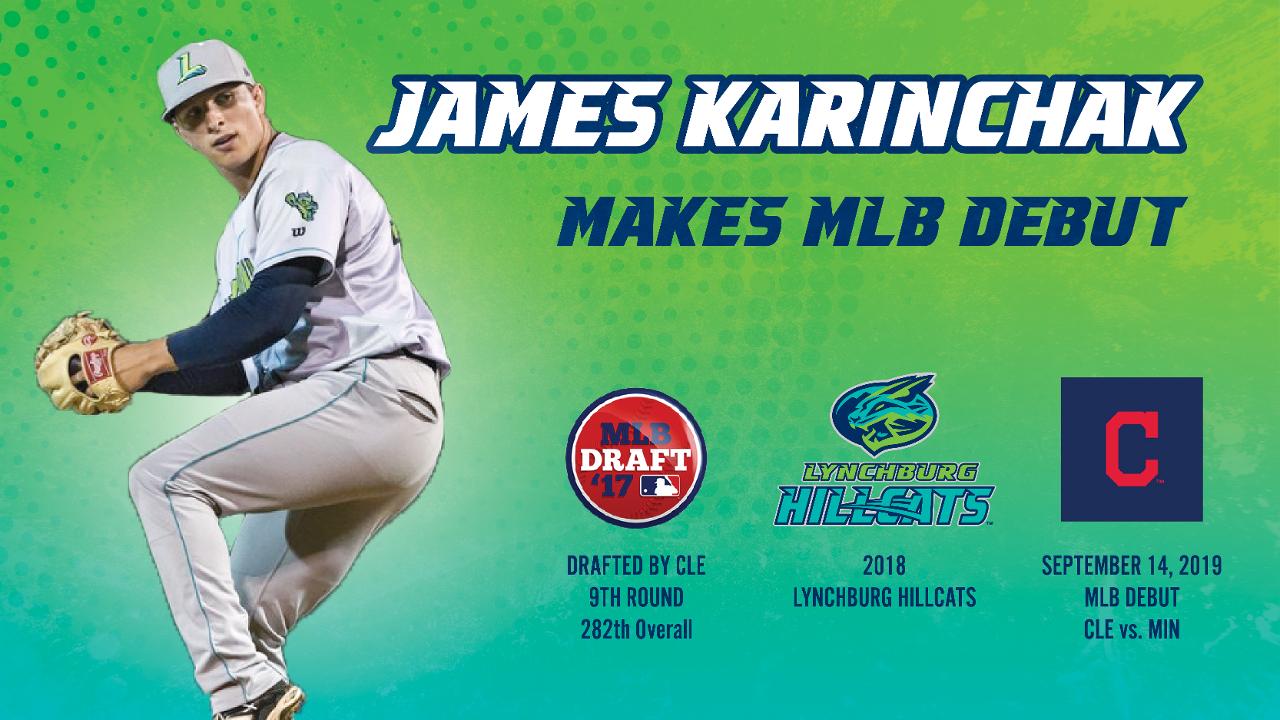 Lynchburg, Va. -  Former Lynchburg Hillcats right-hander James Karinchak made his Major League debut for the Cleveland Indians on Saturday, September 14, against the Minnesota Twins. He entered the game in the eighth inning and fired 1.1 scoreless frames, striking out three of the four batters he faced. The Twins beat the Indians, 9-5, at Progressive Field.

The Walden, N.Y. native was drafted by the Indians in the 9th Round of the 2017 MLB Draft after playing his college ball at Bryant University in Rhode Island. The right-hander began his career as a starting pitcher before transitioning to the bullpen full-time at the start of the 2018 season.

Karinchak appeared in 25 games in a Hillcats uniform during the 2018 season after beginning the year in Single-A Lake County. Promoted to the Hill City on May 3, he went 1-1 with a 1.00 ERA across 27 innings, striking out 45 batters--good for a strikeout rate of 15.00/9IP. He also went a perfect 13-for-13 in save opportunities for Lynchburg. On August 1, Karinchak was promoted to Double-A Akron where he spent the rest of the 2018 campaign.

The 23-year-old returned to the RubberDucks to begin the 2019 season. Through 10 games, Karinchak fired 10 scoreless innings with six saves and an eye-popping 24 strikeouts. He was promoted to Triple-A Columbus on May 3, but missed action on the Injured List from May 13-July 23 with a hamstring injury. Healthy again, the flame thrower rebounded to strike out 42 batters over 17.1 Triple-A innings, a strikeout mark of 21.81/9IP. Overall, In 30.1 minor league innings this season, Karinchak struck out 74 batters and 81 percent of his outs came via strikeout.

Karinchak was one of the best pitchers in Bryant University history. He was named the Northeast Conference Rookie of the Year after winning eight games as a freshman in 2015. Then a starting pitcher, Karinchak put together the best season for a pitcher in Bulldogs program history in 2016, going 12-3 with a program-record 112 strikeouts and a 2.00 ERA on his way to All-American honors. He is just the second player in Bryant history to make it to the MLB, joining Keith MacWhorter who played for the Boston Red Sox in 1980.