All Betts are on at Midwest All-Star Game 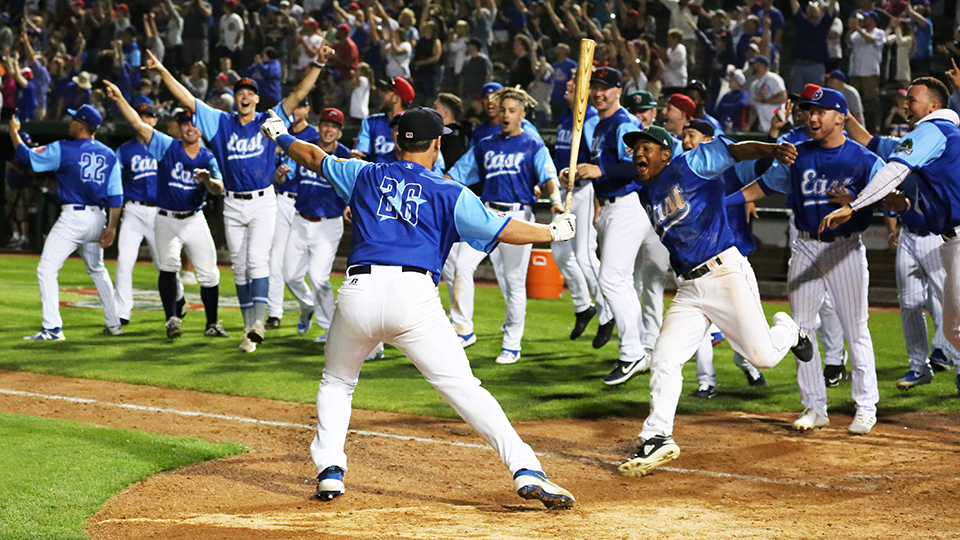 Chris Betts sets off a raucous celebration for the East with two long balls in the Home Run Derby. (Curt Rallo/MiLB.com)

As the entire West All-Star Team screamed and taunted every pitch during a sudden-death Home Run Derby to decide the Midwest League All-Star Game, the East's Chris Betts of Bowling Green stepped out of the batter's box and called his one time out.

After the East and West battled to a 3-3 tie through nine innings, the contest was needed to decide the All-Star Game champion Tuesday at South Bend's Four Winds Field. The West's Blaze Alexander of Kane County belted one homer in his 90-second round.

With 28 seconds left, Betts stepped back into the batter's box and launched a towering blast to right field. A few seconds later, the 6-foot-2, 215-pound left-handed-hitting catcher crushed another homer to give the East the victory.

Betts was quickly mobbed by his East teammates, who doused him with a bath of icy orange Gatorade. It was a moment the second-round pick in the 2015 Draft savored.

Regarded as a raw power guy when he was taken by the Rays, Betts underwent Tommy John surgery in 2015. In 2017, he underwent another round of elbow surgery due to bone spurs. But with the Midwest League's brightest lights on him, Betts showed he's back in full force.

After Monday's power show, Bailey picked Betts to represent the East in the first use of the sudden-death Home Run Derby to decide the All-Star Game winner in lieu of extra innings.

"This is so special," the 22-year-old said. "It really means so much to me. I've had quite the support system, from my parents, my girlfriend … and the training staff and everybody with the Rays stayed with me and allowed me to get to this point.

"There are a lot of organizations, after two elbow surgeries, I don't get back to this point. The Rays have kept the faith and let me do my thing and get healthy and come and show what they drafted me for."

Betts stands third in the Midwest League this season with 12 homers. He's hitting .226.

"There was a lot of time down in the dumps," he said of his long and winding road. "To come back and do this in front of my Dad, my agent and my girlfriend … it's really special. It's been a journey, but a lot of people have stuck by me, and I think it's for the better now.

"The surgeries and all … I got humbled really young. Right after the Draft, I was humbled with the Tommy John, laid up in an apartment for a year doing a bunch of nothing. It's been a grind, but I tried to use it to an advantage."

West Michigan's Ulrich Bojarski hit a pair of sacrifice flies and Dodgers No. 27 prospect Miguel Vargas of Great Lakes smacked an RBI double to account for the East's offense.

Clinton's Jerar Encarnacion belted a two-run homer and Peoria's Delvin Perez stole third and scored on an error for the West.

Curt Rallo is a contributor to MiLB.com This story was not subject to the approval of the National Association of Professional Baseball Leagues or its clubs.