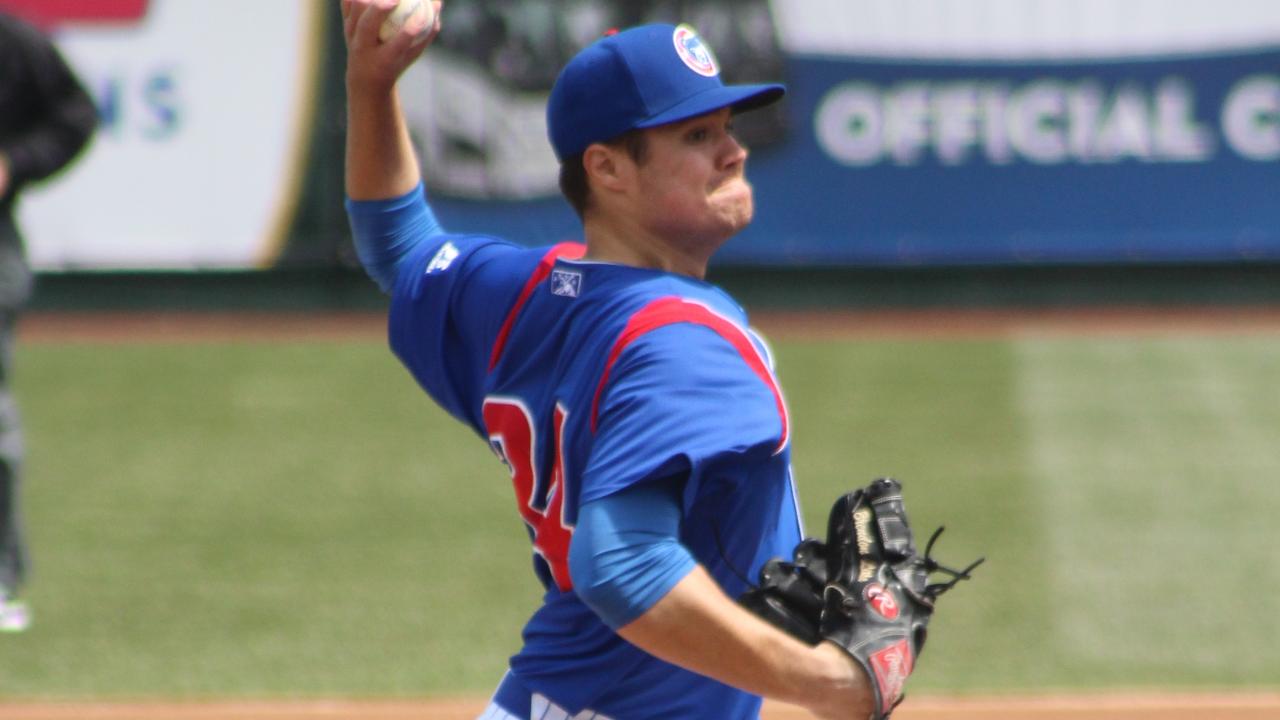 Brendon Little has a 2-2 record over six Midwest League starts with 23 strikeouts and a 1.57 WHIP. (Rikk Carlson/South Bend Cubs)

On May 5, Brendon Little walked off the mound after surrendering five runs on nine hits and a walk over six innings -- and felt good about his outing. The 21-year-old left-hander believed that there were a lot of positives to build from.

It didn't take long for the Cubs' No. 6 prospect to cash in on those positives, as he turned in five scoreless frames on Friday, setting the tone for Class A South Bend in a 5-1 victory over Clinton at Four Winds Field. He gave up a pair of hits and four walks while striking out five.

"I know the line from my last start looked absolutely brutal, but I actually felt great out there and it gave me something to build off of," he said. "Every one of those hits seemed to find a gap or a hole, but I had every pitch working for me and I felt really good, and I was able to carry that feeling into tonight."

Little (2-2) allowed a single to No. 23 Mariners prospect Joseph Rosa to start the game and a leadoff single by Jack Larsen in the fourth. He set down six of the final seven hitters he faced, walking Rosa in the fifth.

"I really had my curveball working tonight and I relied on it a lot for strikes, and I was happy about that," said Little who threw 48 of 80 pitches for strikes.

"I used my curveball to get ahead early in counts and then late to put guys away. I got a little tight as the game went on and lost control of my fastball, and that's what led to the walks. I really wasn't trying to nibble with any of the hitters. My arm just kind of started to tighten up a little and I was spinning off my fastball too hard and lost command. But my off-speed pitches stayed with me and helped me get out of jams."

Selected 27th overall in last year's Draft, Little has had a roller-coaster start to his first full season of pro ball. He's surrendered four runs or more in three of his six starts, posting goose eggs in the other three. Over 23 innings, he has a 5.09 ERA, having given up 22 hits and 14 walks while notching 23 punchouts.

"The big thing for me is just staying within myself and sticking to my mechanics," he said. "Sometimes my glove side opens up, and that causes me to lose command when I'm throwing. So my focus now is just to keep that glove side in and find a good rhythm and stay in it. Every rep now has more intention on that and as long as I can do that and stay in the zone, everything else will fall into place."

Righty Enrique De Los Rios took the ball in the sixth and tossed two scoreless frames, striking out two and giving up one hit. Brian Glowicki, another righty, permitted a run on four hits and a walk while fanning three over two innings to lock down his fourth save and preserve the win for Little.

"I've got five days off now to work on everything until my next start, and to be able to hit that on a win is awesome," the State College of Florida, Manatee-Sarasota product said.

South Bend scored three times in the first inning, when No. 10 Chicago prospect Miguel Amaya worked a bases-loaded walk and ninth-ranked Nelson Velazquez and Brandon Hughes hit RBI groundouts. In the eighth, the Cubs scored two runs on a bunt single by Yeiler Peguero that resulted in a throwing error by right-handed reliever Scott Boches.

Ariel Sandoval accounted for the LumberKings' offense with his sixth homer.