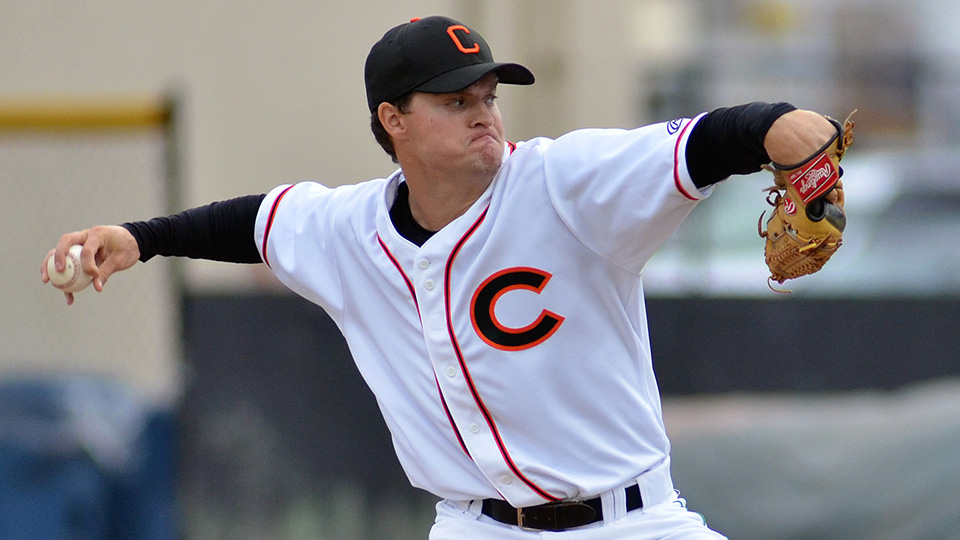 For the second straight game, Jake Walters didn't allow a hit. And that dominance punched the Class A LumberKings' ticket in the Midwest League semifinals Thursday night.

The right-handed Miami prospect gave up an unearned run on two walks and five strikeouts as Clinton romped past Kane County, 10-1, at Northwestern Medicine Field in the best-of-3 quarterfinals series.

Walters retired the first seven batters and took a 4-0 lead into the third inning when he walked Zachery Almond on five pitches. The 2018 ninth-round pick stranded Almond on first base by whiffing Steven Leyton and Keshawn Lynch.

"It always takes the pressure off," he said of the early run support. "Sometimes we score a little too much where I'm sitting down for about 30 minutes. But our offense right now is definitely helping me not be on edge. I had a little more jitters than usual, but I calmed myself down.

"It's a playoff atmosphere. In college I didn't get many postseason opportunities, but it was a big game and I had to remember it's the same old thing. Some stuff worked out for sure."

The 23-year-old needed only nine pitches to retire the side in the fourth. D-backs No. 24 prospect Dominic Fletcher was called out on strikes in a pitch down in the zone and 27th-ranked Buddy Kennedy was set down on three straight pitches.

Blaze Alexander reached second base on a throwing error by shortstop Christopher Torres to begin the fifth, and Arizona's No. 17 prospect moved to third on a flyout to center field by MLB.com's No. 89 overall prospect Kristian Robinson. Tra Holmes plated Alexander with a groundout.

Walters checks the scoreboard every inning, so he knew he had a no-hit bid going.

"It's just out of habit," he noted. "But it didn't really hit me until the fifth. A lot of guys go hitless through the first four innings, then they get a couple hits. I had a great defense behind me. They made some really nice plays behind me."

The University of Alabama product said most of teammates seemed unfazed by the bid and he had a lot of interaction with them, rather than following the baseball superstition of leaving a hurler throwing a no-hitter alone.

"It was still kind of consistent throughout the game," Walters said. "They were giving me fist bumps. I was also asking guys what they saw on certain hitters so I could stay ahead. A couple guys may have been standoffish, but that's understandable."

The LumberKings added six more runs by the seventh with Marlins No. 20 prospect Will Banfield plating 10th-ranked Kameron Misner twice.

"We scored four in the sixth. I told our catcher J.D. Osborne, 'Hey if another runner gets on, we are going to go down and throw' because I was getting a little cold. Then (Kane County) got the next two outs," Walters said. "When I got back out on the mound, I didn't feel as confident as the earlier innings. I was a little off. I was yanking the fastball and my off-speed stuff wasn't sharp. I had to take a deep breath when I got back in the dugout. I thought I was a little more crisp in the seventh."

He dispensed the Cougars on six pitches in the seventh to cap his night. Walters threw 48 of his 76 pitches for strikes.

Although he wanted to pitch the eighth, the 6-foot, 190-pound hurler knew he was on a limit.

"Talking to our pitching coach (Mark DiFelice) for the playoffs, our coordinators don't want us going to deep, pitch count-wise," Walters said. "I was at a certain point where they felt comfortable to take me out. I wanted to go out. I was shocked, but after taking a couple minutes to think about it, it makes sense. There's no telling what the eighth would have been like."

The seven hitless innings in the playoffs extended his hitless and scoreless streaks to 14 innings following seven no-hit frames against Burlington on Aug. 20 in his last start of the regular season.

"It's pretty simple," Walters said. "My fastball command has been really good. I'm commanding both sides of the plate. The catchers have been doing a really great job in our gameplan and reading swings. The defense really deserve the credit."

After walking Lynch with two outs in the eighth, the no-hitter ended when Fletcher beat out an infield single to second base on a 1-2 offering from Cam Baird -- Kane County's only hit of the ballgame.

Banfield went 3-for-5 with two doubles, four RBIs and a run while Misner added three hits and three runs.

"We are all excited," Walters said. "We've been riding a pretty good hot streak in the second half. We've all bonded and really grown together. We are glad to see each other having some success. ... We know we have an off day tomorrow, so we can kind of rest. We still need to maintain this level of play that we're at right now and continue our momentum to the second round of the playoffs."

In other Midwest League action:

Quad Cities hurler Brett Daniels struck out 10, but gave up an RBI single by Tyler Webb in the fourth and a run-scoring double by Jared Akins in the seventh. Twins No. 13 prospect Matt Canterino allowed a run on two hits over five innings and Dylan Thomas struck out two in two innings of relief for the win. Astros No. 17 prospect Ronnie Dawson scored Quad Cities' run on a single by Alex McKenna in the fifth. Gameday box score