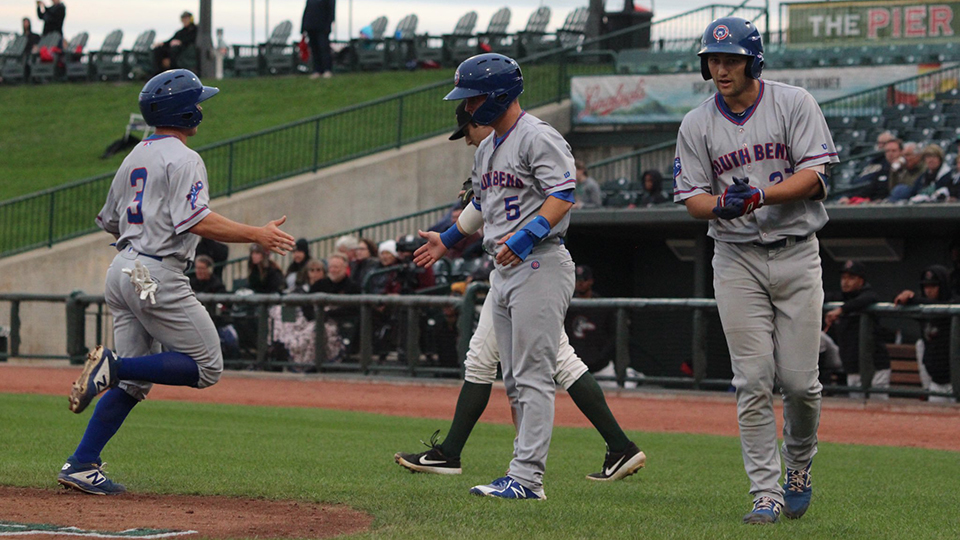 The top four batters in South Bend's lineup combined to go 9-for-18 with six RBIs in Game 2. (South Bend Cubs)

There's one thing Buddy Bailey likes about what his team is doing right now.

"Winning," the South Bend manager said with a chuckle.

The Cubs have a spot in the Midwest League Championship Series and not a playoff loss to their name. After sweeping Bowling Green in the opening round, South Bend used a 7-3 win over Great Lakes on Sunday night at Dow Diamond to do the same in the best-of-3 semifinals. The top four batters in the lineup combined to go 9-for-18 and accounted for six RBIs in the clincher.

The Cubs will play Clinton or Cedar Rapids in the Finals. It will be the franchise's first appearance there since 2013 and it seeks its first championship since 2005 as a D-backs affiliate.

Third-ranked Cubs prospect Brennen Davis supplied the first hit for South Bend in Game 2, a one-out double to left field off right-hander Kevin Malisheski in the opening frame that moved Andy Weber -- who walked -- to third base. Weber came home on cleanup hitter Nelson Maldonado's single and the Cubs led for good four batters into the game.

Davis contributed again in the second by singling home a run against southpaw Justin Bruihl. Maldonado produced two more runs with a double in the fourth, leadoff man Clayton Daniel delivered a two-run knock in the fifth and Maldonado capped his four-RBI night with a sacrifice fly in the eighth.

A series of transactions within the Chicago system left South Bend with its current roster in early August. Bailey tried different lineup combinations until late in the season, when he locked in on the one that hasn't lost a playoff game. And while the top of that order clicked on Sunday, Levi Jordan reached base four times and scored three times out of the ninth spot. Bailey stressed that it takes an entire lineup to produce consistently.

"It's been a combination of 1-9, and the guys that have been finding ways to get on base and get them in," he said. "Tonight, the No. 9 and No. 1 hitters had six hits between them. If you're doing that and getting back to the guys that you have in the lineup to knock them in, things will happen."

Davis, who bats third, fills that role. Two extended stints on the injured list caused by repeatedly getting hit by pitches on his hand limited him to 50 regular-season games in his first full year in the Minors, but he's produced when healthy. The 19-year-old batted .305 with 20 extra-base hits and a .907 OPS. He went 0-for-4 in his first playoff game but has seven hits in three contests since, including a pair of doubles in Game 2 against Bowling Green on Thursday.

"It's pretty amazing what he did," Bailey said.

Brandon Hughes surrendered three hits and a walk and was tagged for a sacrifice fly in the seventh, but Brendan King picked him up and ended the threat by getting Luke Heyer to ground out. The right-hander finished up, retiring all seven batters he faced.

King was the 13th Cub to appear in the game. But, Bailey said, it's taken dozens of players, coaches and staff to get the Cubs three wins from a trophy.

"We've got 35 different hearts," the veteran manager said, "but right now we're playing with one pulse."

In other Midwest League playoff action:

Clinton took a 2-1 lead into the bottom of the ninth inning and handed the ball to right-hander Zach Wolf. But a throwing error by shortstop Christopher Torres put Matt Wallner on second base to begin the inning and DaShawn Keirsey came through with the last of three straight singles, plating Seth Gray with the winning run. The comeback forced a decisive Game 3 on Monday in Cedar Rapids. Gameday box score