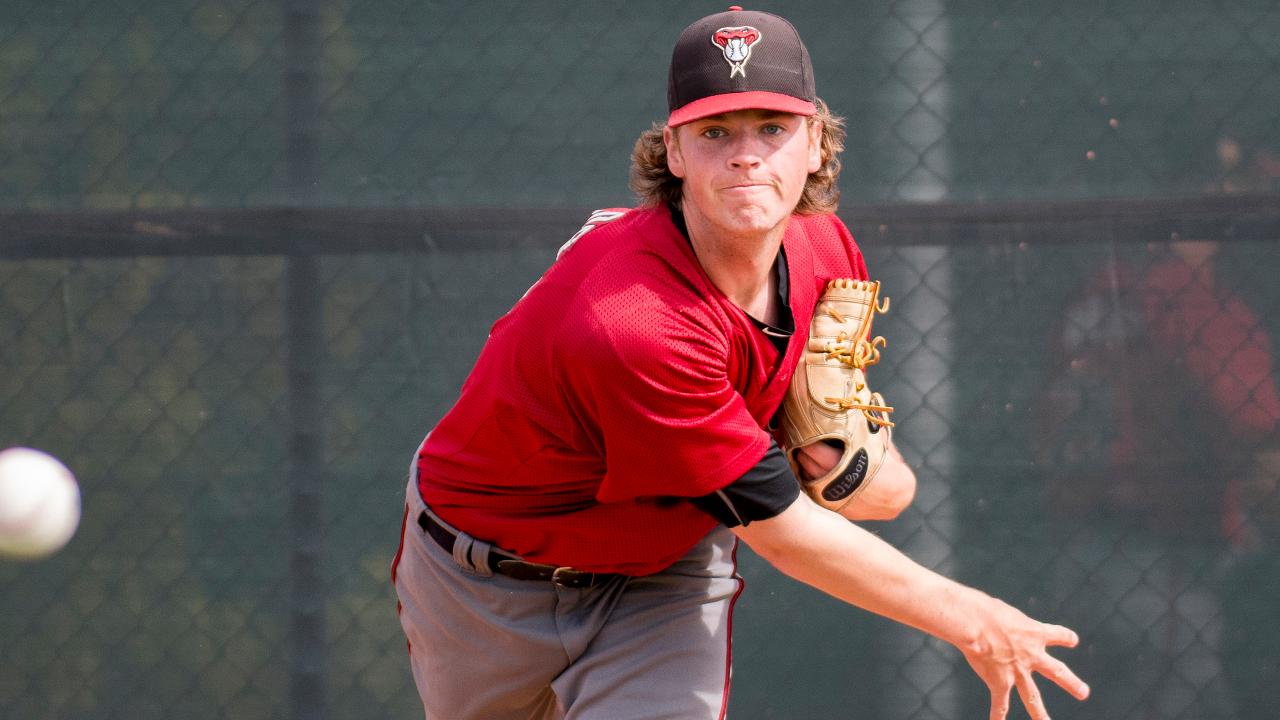 Curtis Taylor has 29 strikeouts in 26 innings this season for Class A Kane County. (Jared Ravich/MiLB.com)

Curtis Taylor knew of the organization's plan to stretch him into a starter after last season, but a shoulder impingement kept him out until early May.

Six starts into his professional career, the D-backs' No. 12 prospect is starting to get the hang of things.

"I like the opportunity to go out there and win a game for your team pretty much single-handedly," Taylor said. "It's been a little bit of an adjustment, going through the lineup two or three times, but it's getting better and I feel like I'm coming along nicely."

Taylor allowed two hits and matched a career high with eight strikeouts over six scoreless innings in the Cougars' 5-4 loss to Quad Cities on Friday night at Modern Woodmen Park. It was the first scoreless outing of the season and longest in the converted reliever's professional career.

"My fastball felt good today, it was coming out like it does most of the time," the 6-foot-6 fireballer said. "I just was able to throw three pitches for strikes the majority of the time, which has kind of evaded me at the beginning of the season

After throwing 91 2/3 innings in his senior season at the University of British Columbia, Taylor appeared in 17 games out of the bullpen for Class A Short Season Hillsboro, never lasting longer than one inning. The shoulder injury threw him off track to start 2017, and he wasn't assigned to Kane County until May 6.

"They just wanted to make sure I was ready to go before they send me off," Taylor said. "I was focusing on my mechanics and really just trying to throw all of my pitches for strikes down in the zone. Sometimes, I leave things up and it gets hit."

The 2016 fourth-round pick didn't have to wait long to match his career high for strikeouts. He fanned eight in five innings on Sunday against Cedar Rapids, but didn't factor in the decision.

"Our pitching coach, Rich Sauveur, has been all over me to just pound the strike zone with my fastball early, which is my best pitch," Taylor said. "I really just focused on that the last few times out and it's worked out pretty successfully."

Friday marked the first appearance this season in which the 21-year-old did not allow a walk, throwing 46 strikes among 71 pitches. He got to a three-ball count just four times, recording three strikeouts.

"I got a lot [of strikeouts] with my slider today," Taylor said. "I threw it for a strike or ball when I wanted to. Sometimes I just let my fastball eat; getting it by guys, I had some success tonight as well."

The right-hander dominated in his first turn through the lineup, retiring the first eight batters -- four via strikeout -- before Gabriel Bracamonte blooped a single to right field. With a 3-2 count, Taylor then fanned Astros' ninth-ranked prospect Daz Cameron to get out of the inning.

In the fourth, Taylor gave up a one-out liner up the middle to No. 14 Houston prospect Yordan Alvarez for a single. He fell behind 3-0 on the next batter, Chuckie Robinson, but fanned him before getting Wander Franco to fly out.

Taylor, the highest-drafted UBC player since former Major Leaguer Jeff Francis went in the first round in 2002, retired the final eight batters he faced, capped by a punchout of Ronnie Dawson -- the seventh of Taylor's eight strikeout victims to go down swinging.

With the Cougars up, 4-1, Taylor gave way to Jake Winston, who promptly allowed a run in the seventh and was on the hook for Jonathan Arauz's leadoff single in the eighth before being replaced by Ryan Burr.

Burr (1-2) struck out the first two batters he faced and walked the next two before Robinson belted a grand slam.

Anfernee Grier, the D-backs' No. 9 prospect, doubled to open the ninth and advanced on a wild pitch with two outs, but Luis Silverio lined out to Dawson in right.

Ramon Hernandez had a two-run triple and a single for Kane County.

Alvarez singled twice and scored a run for Quad Cities.