Prize honors Woman Executive of the Year in the Minor Leagues 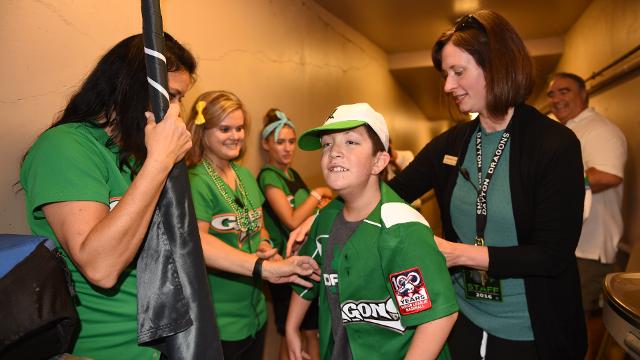 Brandy Guinaugh (at right) oversees the Dragons Anthem Home Run for Life program among her many responsibilities.

ST. PETERSBURG, Fla. -- Minor League Baseball and Rawlings Sporting Goods Company, Inc. announced today that Dayton Dragons Vice President, Sponsor Services Brandy Guinaugh is the recipient of the 40th Rawlings Woman Executive of the Year Award. Since 1976, the Rawlings Woman Executive of the Year Award has been presented annually to a woman who has made outstanding contributions to her club or league, or to baseball. Guinaugh will receive her award at the Baseball Winter Meetings Awards Luncheon on Monday, Dec. 5, at Gaylord National Resort & Convention Center in National Harbor, Maryland.

"I was ecstatic to learn I was nominated for this award, so to be recognized as the recipient is both overwhelming and humbling," said Guinaugh. "I'm truly blessed with my position at the Dayton Dragons organization. I've been fortunate to be part of so many magical moments on and off the field in my role. My passion runs deep in continually growing, leading by example and hopefully always being a role model for professional women in sports or business."

The 12-year veteran of the Dragons is responsible for the execution, delivery and fulfillment of over 70 sponsor agreements, more than 50 suite contracts and over 50 non-baseball stadium events in addition to maintaining relationships with the Dragons' corporate partners. Under her direction, the Dragons have captured the Minor League Baseball Organization of the Year Award by Ballpark Digest, the Midwest League Patriot Award and were a finalist for a Sports Business Journal's Professional Sports Team of the Year award.

Brandy oversees a full-time services staff of six people, along with the development, creation and production of all sponsor-related marketing materials and promotions. She oversees the management of local radio broadcasts for all 140 games and the local television broadcast of 25 Dragons home games. Guinaugh also handles more than 70 sponsorship-related newspaper ads, as well as the design and execution of the Dragons game night program.

"When we look for new staff, we look for people who are smart, hard-working and of great character; that is exactly what we got and more when Brandy joined our organization," said Dayton Dragons President and General Manager Robert Murphy. "She very quickly became a key member of our leadership group. She is great with her staff and equally effective in working with our corporate clients."

Brandy obtained a Bachelor of Science from Miami University in Ohio with a major in marketing and a minor in decision sciences. Before joining the Dragons in 2004, she worked as a branch manager for Fifth Third Bank before being promoted to their marketing department.

"The Dayton Dragons have been one of the most successful franchises in Minor League Baseball since their inception in 2000, and their success is due in large part to the efforts of Brandy Guinaugh," said Minor League Baseball President & CEO Pat O'Conner. "Brandy is a jack of all trades when it comes to operating a club on the business side and is a valuable member of Dayton's management team. On behalf of Minor League Baseball, I congratulate Brandy on being named the 2016 Rawlings Woman Executive of the Year."