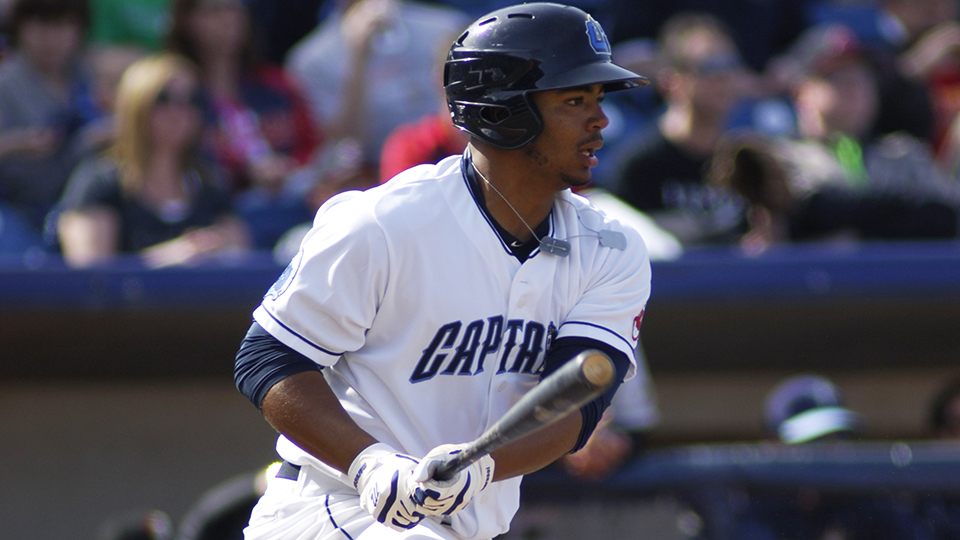 Bobby Bradley has homers in four of his past five games with Lake County. (Lianna Holub/MiLB.com)

For 15 minutes on Sunday, Indians infield prospect Bobby Bradley stood in the batting cage with the bat on his shoulder. Dozens of breaking balls whizzed by, crossing the plate just below the strike zone, but the 19-year-old just stood there and watched.

"I set the breaking ball machine up so the ball was down in the dirt," Lake County hitting coach Larry Day said. "I told him … 'Get on time for a fastball over the plate. Then recognize and thus take the breaking pitch down.' It's a thing he has trained."

A few hours later, Bradley took a series of off-speed pitches and worked himself into a 3-0 count. A few seconds after that, he earned himself yet another leisurely stroll around the bases at Classic Park.

Cleveland's No. 10 prospect smacked his 11th home run of the season Sunday, going to the opposite field in the first inning as the Class A Captains slugged their way to an 8-0 win over the Kane County Cougars.

The 19-year-old finished 3-for-4 with a triple and three RBIs. He has homers in four of his past five games and five of his past eight.

Bradley is on pace to hit 32 long balls this year despite missing almost a month's worth of games with an oblique strain. Last year, three players tied for the Midwest League lead with 22. The only teenagers to hit 20-plus homers in the league since 2010 are Oakland's Matt Olson, Minnesota's Miguel Sano and Seattle's Nick Franklin.

"Obviously, he has got some great God-given ability and power," Day said.

The 2014 third-rounder worked the 3-0 count against Cougars right-hander Ethan Elias before jumping on a 3-0 fastball on the outer half. The ball soared out to left-center field, giving the left-handed hitter four opposite-field round-trippers on the season.

"I think Bobby has just really taken into a whole-field approach, and he's using the whole field, taking what pitchers are giving him. He's not looking to pull. He's up there looking to go the other way and just react to where the pitch is."

Bradley landed on the disabled list with an oblique strain in mid-April after hitting .174 in his first nine games. He returned in early May and slugged two homers in his second game back on May 11. Bradley then hit just three homers in his next 19 games and was batting .238 through June 5.

His stats across the board began to tick up the next day. On June 6, he went 1-for-5 with his eighth homer. The next day, he recorded three hits and then went yard on June 10 and 11. After going 0-for-4 on June 12, he went 2-for-4 with a dinger Saturday, then added another big fly Sunday.

Now the first baseman is batting .279 with a .969 OPS. His 11 home runs are tied for second in the Midwest League with Kane County's Stryker Trahan -- Bowling Green first baseman Casey Gillaspie paces the circuit with 15.

Day said the recent power surge can be in part attributed to a mechanical adjustment Bradley made while the team was on the road last week. Day said the 19-year-old was staying too far back while he loaded his hands before swinging, to where he couldn't "get into an athletic position that enables him to get the barrel to the zone and tap into the power that he has."

Bradley corrected the problem quickly, something Day attributes to his work ethic and intellect.

"You guys see the home runs at seven at night," Day said. "This kid practices his craft three times a day. He's in the cage at 2 o'clock. He's on the field and in the cage at 5 o'clock. Then he's back in the cages at 6:30, right before the game.

"I tell the players I have, 'He invests in himself. He doesn't really view it as work. He views it as an investment in himself. There's a reason for why it's happening.'"

Bradley has 19 home runs in 77 professional games and also now has seven triples. The first baseman is no burner -- MLB.com rated him a 20 runner on the 20-to-80 scale -- but that hasn't kept the Mississippi native from legging out his share of three-baggers.

Lake County right-hander Sean Brady (5-3) allowed two hits, three walks and struck out six over six innings, lowering his ERA to 2.88. The left-hander has allowed just one earned run over his past three starts.